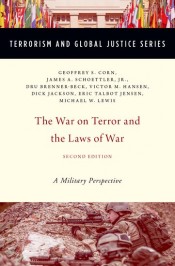 The War on Terror and the Laws of War: A Military Perspective, Second Edition

Since its inception, the Islamic State (IS) has engaged in continuous behavior that violates the law of armed conflict (LOAC). These acts include the torture and killing of civilians; inhumane treatment of detainees generally, and in particular, women; forced compliance with religious and cultural practices; and, most recently, the systematic destruction and/or illegal sale of important cultural property. New reports appear to indicate that in addition to these violations, members of the IS have used chemical weapons against opposing forces.

In response to these open and notorious violations of international law, the international community’s response has been, at best, ineffective. Not only has the current coalition of nations fighting the IS been unable to make major military gains, but the almost universal condemnation of the IS LOAC violations has done nothing to prevent the on-going wanton destruction in Palmyra. Calls for action by world leaders are increasing in the face of these atrocities.

Historically, when nations wanted to discourage opposing nations from violating the LOAC, they would resort to reprisals. The doctrine of reprisal allows a nation to respond to an unlawful act by committing acts that would otherwise be unlawful under international law but are done with the intent to bring the original violator back into compliance. While reprisals were a justified course of action in the 18th and 19th centuries, the doctrine has fallen into disrepute in the 20th and 21st centuries, mostly out of the fear that they are ineffective and only lead to escalation.

As a result, through treaties and the development of customary international law, most nations have either completely eliminated reprisals as a legal response to LOAC violations, or at least severely restricted the instances under which such actions can be taken. Generally, before a country can resort to reprisals against another nation for violations of the law, the country must meet the following criteria:

In addition to the limitations above, there are specific prohibitions on who and what a nation can target as a reprisal. For example, the 1949 Geneva Conventions prohibit the use of reprisals against the wounded, sick, medical personnel, and medical buildings; the wounded, sick and shipwrecked at sea; prisoners of war; and protected civilians and their property. Other specific prohibitions apply to those nations who are Parties to the 1977 Additional Protocol I (which include most nations across the world, but not the US).

Given that the doctrine of reprisal does not exist in NIACs, could the doctrine be borrowed with some effect by those nations opposing the IS? Could reprisal type actions play any role in inducing the IS to comply with international law? The answer is a very cautious “possibly.” There appears to be at least three potential areas that the IS cares deeply about and that are key to their success which might be reached by reprisal-like actions: funding, religious buildings, and media access.

A not-insignificant amount of the IS money comes from the production and sale of oil. About a year ago, the US decided to conduct air strikes on oil production facilities. Detractors from this approach noted that such economic targets might not fit the definition of lawful military objectives. For those who believe such attacks are violations of international law, they would become reprisal-like so long as they met the criteria above. Other similar income producing civilian assets might present reprisal-like targets for those opposed to the IS to consider in an attempt to bring the IS back into compliance with the law.

While religious buildings such as mosques are protected from attack as civilian objects, they might be made the subject of reprisal-like strikes in order to induce compliance with the law. Mosques and other religious buildings that constitute the cultural and spiritual heritage of all peoples would be exempt from such reprisals, but other buildings that did not carry this significance might be targeted. While the optics of this type of action are very poor, it may be that with proper advance notice of the proposed strikes, the IS would be induced to reconsider its LOAC violations.

Finally, and perhaps most acceptable of the proposed options, the IS thrives on media attention. They effectively use social media to pass their message, recruit both fighters and followers, and publicize their actions. While certain uses of the Internet and social media may be considered a military objective, using force to shut down the Internet access to a geographic region or group of civilians would normally not be considered legal by a non-territorial state. However, such action could have a significant impact on the IS and might be an effective means to encourage compliance with the LOAC.

Though these options may have some basis in law, and sound inviting as a way to stop the IS from its continued flaunting of international norms and laws, I am not sure this is the right occasion for the international community to decide reprisal-like actions are valid in NIACs. First, it is unclear that these actions, or any others that might be devised, will bring the IS into compliance. Though not one of the recognized legal criteria, I believe reprisal-like actions should only be resorted to if there is a good chance that they will be successful. Second, any application of the law by analogy, particularly when carried out by a single nation or even a small group of nations, runs the risk of discrediting existing law. Getting consensus of the international community would be very important before the US or a group of its allies decided to adopt IAC reprisals in a NIAC environment.

Rather, if the international community is outraged by the actions of the IS, perhaps a more aggressive military and diplomatic approach is necessary. I don’t believe that the IS could withstand a truly concerted effort by the united international community to lawfully prevent future outrages. If we are distraught by the destruction of Palmyra, the treatment of civilians and particularly women, and the use of mustard gas by the IS, there are still a number of lawful actions that can be effectively used to solve those problems.