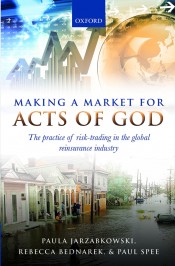 Making a Market for Acts of God: The Practice of Risk Trading in the Global Reinsurance Industry

In the face of severe disasters, or ‘Acts of God’, society turns to reinsurance. It is a financial market that insures insurance firms, and thus trades in large-scale disasters. Reinsurance is therefore the backbone for economic and social recovery in times of unimaginable losses, such as Hurricane Katrina or the attack on the World Trade Centre, through enabling insurers to pay their claims. However, rapid and escalating changes are eroding fundamental norms and practices in this important industry.

How does such a unique and important market function? Through an ethnographic “fly on the wall” study we observed the foundations of reinsurance trading: sitting alongside underwriters as they evaluated risks and allocated large amounts of capital. Reinsurance has developed specific trading practices and norms that differentiate it from the majority of other financial markets. One key norm is that in reinsurance pricing cycles do not represent boom/bust dysfunction. Rather in reinsurance trading they enable long-term stabilizing of capital through payback after loss. Since the cost of a risk remains unknown until a disaster strikes, the payouts to restore order post-loss can outweigh the premiums reinsurers receive for offering protection pre-loss. The more severe the event, the higher the required payout and thus the more prices might increase the following year to make payback to the reinsurance firms. Following particularly expensive disasters, such as Hurricane Katrina, the price of all reinsurance cover will increase worldwide to reflect the loss to the reinsurance purse across the industry as a whole. This allows “payback” to the reinsurers to rebuild their capital and adjust pricing to reflect the cost of the risk involved. Such norms mean that pricing cycles between hard (high-priced, post-loss) and soft (low-priced, no-loss) markets. These cycles enable capital to be stabilised through long-term relationships in which reinsurers have an incentive to pay claims and continue to underwrite risks following a loss, rather than abandoning their clients or suspending claims payments in long legal disputes.

What is changing? Several factors affect the current norms and practices. As large insurers have consolidated they have changed how they buy reinsurance. These large global insurers are buying less insurance generally, as they have become aware of the capital efficiency and diversification benefits inherent in their own global portfolios. In addition, new types of Alternative Risk Transfer products such as Catastrophe Bonds are increasingly prevalent and increasing. These new products are associated with new players such as hedge and pension funds entering the reinsurance market alongside traditional reinsurers. Such players operate on a different and, as yet, poorly understood array of social norms for pricing risks and paying claims. In essence, it is a time of unprecedented change.

What is the impact of these changes? While the exact implications of these changes are unclear, it is already apparent that market pricing cycles are historical rather than current features of the reinsurance market. Warren Buffett warned of an ongoing slump in reinsurance results as new investors and financial products enter the market: “It’s a business whose prospects have turned for the worse and there’s not much we can do about it”. This new reality was apparent in our observations of the industry in 2011. Despite being the second costliest year on record for the reinsurance industry a hard cycle whereby prices increase significantly – as they did following large disasters such as Hurricane Andrew in 1992 – did not eventuate. Rather, the new sources of capital, new products, and the ability for large, diversified insurers to retain more risk showed its effects; the payback of a hard market through which reinsurers typically recoup losses did not follow. That is, the old mechanisms of market cycles by which capital stability was enabled over the long term, have been eroded by the new competitive dynamics. While low prices help to keep the costs of primary insurance down, they may also have devastating effects if reinsurers are unable to build sufficient reserves and returns to pay claims following disasters. At the same time, the novel products offered by non-traditional players and the new industry dynamics have yet to prove their merit in ensuring capital stability and payment of claims.

What are the knock-on effects of change? Eroding of market cycles removes the incentives for long-term relationship-based trading, through both difficult and good times, so potentially also has a domino effect on claims payments and policy renewals. Long-term trading relationships have long had primacy within the reinsurance industry. Reinsurers had an incentive to maintain relationships and pay claims quickly post-loss, keeping capital liquid, as they would also be reimbursed post-loss by the hardening market cycle. As market cycles, which are fundamental to long-term trading relationships erode, a more opportunistic and price-sensitive basis to trading is emerging. As a reinsurance executive explained during one of our interviews, the industry is:

“… going through a shift in mindset. If margins are huge we can always play the relationship game because both of us will win […] One year you might have a loss but you will make it up in three or four years, so we just stick together. If margins get thin…things become more opportunistic on the insurance but also on the reinsurance side […]. There’s not enough margin there to say yes it’s OK, in a few years we’ll all be in the black again …. It’s not going to happen.”

The question of whether reinsurance pricing is cyclical is therefore closely linked with whether or not it is a relationship-based business.

So, do these changes really matter? Evidence suggests that fundamental norms and practices at the heart of the reinsurance market are eroding. We do not yet know the full implications of these changes. While the industry will surely adapt and survive, it is critical to remember its central “job” of ensuring capital flows to those who need it to rebuild, socially and economically, following large-scale disasters. A starting point is awareness that the proven norms and practices that have enabled the industry to function through major disasters in the past are changing rapidly, with implications that are poorly understood.

What we learned from the financial crisis of 2008