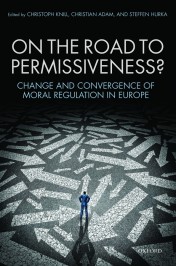 On the Road to Permissiveness?: Change and Convergence of Moral Regulation in Europe

Moral dilemmas are ubiquitous in modern democratic societies. Can we protect the bodily integrity of women and their unborn children at the same time? How can we protect the free will of adults while at the same time denying them to engage in self-harming activities, like (assisted) suicide or drug use? Of course, there is no easy answer to these questions, which have no objectively right or wrong solution. Scientific investigation – which often helps us to identify social, educational, or environmental policies that work best – cannot provide guidance in these moral contexts. Instead, perceptions of right and wrong are always a matter of philosophical perspective, personal values, and deeply rooted moral convictions. Since many feel very deeply about these issues, it can be particularly difficult for policy-makers to find such answers that are acceptable to themselves and the people they represent. And yet, they have to do just that when dealing with public policy in the areas of abortion, euthanasia, pornography, prostitution, or homosexuality.

The question is, therefore, how do politicians in democratic societies resolve such moral dilemmas? Well, it seems that four answers are particularly important.

So how do policy-makers resolve moral dilemmas? The first answer is that they very often don’t! Non-decisions are a typical feature of this policy area. This has been true for euthanasia in many European democracies leaving the task to deal with the resulting legal grey areas to the courts and medical professionals. The fact that many large morality policy reforms have been triggered by referendums – like the Irish referendum approving the constitutional amendment allowing same-sex marriage – also reflects this tendency of governments and legislatives to leave these decisions to others. In fact, there appears to be a particularly strong discrepancy between the rather high frequency with which moral issues are debated in the public sphere and the low frequency of actual policy change.

Secondly, policy-makers resolve moral dilemmas by finding compromise solutions. This might sound trivial when in fact, it isn’t. Of course, democratic decision-making is the art of creating compromise. Yet, due to their tight nexus with personal core values and religious beliefs, morality policies are often thought to be least likely areas of political compromise. Instead, policy change is argued to emerge when one advocacy coalition triumphs over the other. Yet, policy solutions today almost always reflect compromise solutions. Regulation hardly ever fully prohibits or permits controversial behavior. When following the public debate on abortion, for example, one might assume that politicians have to decide between the prohibition of abortion (pro-life) and the permission of abortion (pro-choice). Empirically, however, actual abortion policy never reflects this dualistic and polarized debate. Instead, it mostly defines a rather fine-grained set of conditions under which abortion is legal and illegal including time frames, medical, psychological, or even social conditions, and consultation requirements to name just a few. Even in Ireland, which continues to prohibit abortions, prohibition is not absolute. Abortions are allowed under (very, very, narrowly defined) conditions as when the mother’s life is in danger or when she is suicidal.

Thirdly, political compromise in moral dilemma situations often relies on a trade-off between behavioural rules and sanctions for violating these rules. For the last decades, morality policy change in the western world has mostly been a change towards more liberal policy regimes. Yet, often these changes have reflected a particular combination of changes in rules and sanctions. Specifically, the introduction of more permissive rules is often compensated by also introducing tougher sanctions in case these new rules are violated. Reaching compromise over moral issues acceptable to the (often rather polarized) public is rather difficult. The inclusion of trade-offs between these two dimensions appears to be helpful in this regard. The liberalization of basically any form of adult pornography in most western countries has often been accompanied with a strong commitment to strictly prosecute anyone crossing the last remaining legal boundary, which is the provision of child pornography.

Similarly, the proposal for a reform of euthanasia in Germany brought forward by Renate Künast (Green Party) and Petra Sitte (Left Party) would remove legal obstacles to assisted suicide provided in a non-commercial setting. At the same time, the proposal would strictly protect the remaining legal border by introducing a three-year prison sentence for anyone providing assisted suicide commercially. Of course, not all instances of morality policy reform reflect such compensation between rules and sanctions. Yet, their combination seems to make reforms more endurable. Take the current prostitution debate in Germany, for example. Since Germany has turned prostitution into a regular profession, it continuously criticized. One major point of criticism is that the remaining legal border – forced prostitution which remains illegal – is not effectively protected. The introduction of tough sanctions for clients crossing the remaining legal barrier – exploiting sex-workers forced into prostitution – therefore ranks prominently among reform proposals attempting to stabilize the liberal policy regime.

Finally, policy-makers resolve dilemmas by turning from discussing what is morally right to debating what is feasible. Conservative politicians who morally object to cannabis use, often no longer insist on maintaining prohibitive cannabis policies as they have come to view these policies to be impossible to enforce at reasonable costs. Similarly, early liberalizations of the general prohibition of homosexual practices in Great Britain were (among other things) triggered the practical difficulties of effective enforcement. Cases could often not hold up in court because investigations of behavior that occurred behind closed doors and in private bedrooms often represented gross violations of privacy rights or relied on witness intimidation. Or, consider pornography regulation, as another example. After Denmark allowed the distribution of adult pornography in the 1960s, massive amounts of illegal pornography were smuggled into Germany. As German enforcers became increasingly overburdened, their representatives soon questioned whether it would make sense to have such a prohibition if it could not be enforced properly. The German reform of the early 1970s, was (among other factors) influenced by very practical concerns about the enforceability of prohibition in the light of widespread noncompliance among the general public. This is not to say that social movements and widespread political mobilization of citizens with demonstrations in the street are not important for morality policy change. Quite clearly they are. Yet, we tend to overlook the impact of hidden and secretive mass behaviour often also important for morality policy reforms: widespread noncompliance among the general public. Value change does not only bring people to the street to voice their discontent with existing policies openly. Value change also leads them to very privately disobey rules they perceive as illegitimate. Widespread noncompliance brings a practical dimension to morality policy debate that can make it more rational for policy-makers to move towards more permissive regimes.

Christian Adam is an Assistant Professor at Geschwister-Scholl Institute for Political Science at the University of Munich. You can visit his website.

Steffen Hurka is an Assistant Professor at Geschwister-Scholl Institute for Political Science at the University of Munich. You can visit his website.

Christoph Knill is Professor of Empirical Theory of Politics at the University of Munich, Germany. He was recently awarded an Advanced Grant of the European Research Council, a project grant under the European Commission’s 7th Framework Program, and is Head of the Research Unit on International Public Administration financed by the German Research Foundation. You can also visit his website.

They are the authors of On the Road to Permissiveness?: Change and Convergence of Moral Regulation in Europe (OUP, 2015).