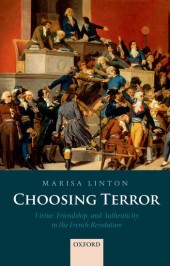 Choosing Terror: Virtue, Friendship, and Authenticity in the French Revolution

The French Revolution was one of the most momentous events in world history yet, over 220 years since it took place, many myths about it are still firmly entrenched in the popular psyche. Some of the most important and troubling of these myths relate to how a revolution that began with idealistic and humanitarian goals resorted to the “Terror”. It is a problem that is as pertinent for our own world as it was for the people of the late eighteenth century.

1. The French Revolution was made by the poor and hungry.

False. Or not initially, though they were certainly involved later. The Revolution was begun by members of the elite, many of them nobles, following a financial crisis which led to state bankruptcy, loss of confidence in the monarchy, and political destabilisation. Almost every successful revolution begins with divisions amongst the ruling elite and loss of control of the army. If revolutions were made by the poor, the hungry, and the desperate, they would happen far more often.

2. Marie-Antoinette, on being told that the people had no bread, replied, “Let them eat cake”.

No, she didn’t. Nor did she suggest they might try brioche, croissant, or any other culinary delicacy. It is true, though, that she was supremely ignorant of, and indifferent to, the lives of the poor. She didn’t have all the affairs her enemies credited her with either – just one, with the Swedish noble, Fersen. But it was true that she was a big spender, lavishing money on a select group of her favourites. It is also true that during the Revolution, in 1792, she betrayed the battle plans of the French to the Austrian invaders in the hope that the French armies would be defeated and the monarchy restored.

3. The French Revolution of 1789 and the fall of the Bastille led directly to the overthrow of the monarchy.

False. The revolutionaries of 1789 set up a constitutional monarchy. This lasted three years. In the end the constitutional monarchy fell in large part because it became obvious that the king himself didn’t accept it, when in June 1791 he attempted with his family to flee France in the flight to Varennes, a plan largely orchestrated by Marie-Antoinette and Fersen. Suspicion of the monarchy was a big factor in the declaration of war on the foreign powers in April 1792. It was a war that went very badly for France and led to a second revolution, on 10 August 1792, that overthrew the monarchy. A National Convention was instated, voted for on the basis of a democratic male franchise. Its deputies declared France to be a republic.

Not true in 1791-1792, when Brissot was the voice of the radical Revolution, calling for war with the foreign powers, in the hope that the turmoil of war would expose the treason of the king. Brissot’s war plan was opposed by Robespierre who thought it a crazy idea, which could go badly for France and lead to increased militarisation. But at the time Brissot’s war policy was popular, and Robespierre was marginalised as a prophet of doom. The situation only changed because events proved Robespierre right. As he had predicted war destabilised the political situation. It generated panic and the search for conspirators. The Girondins were caught up in that downward political spiral, were outflanked, and became moderates. They were overthrown at the demand of the Paris popular militants, the sans-culottes, and condemned as traitors in league with the foreign powers – though their real faults were incompetence, ambition, and recklessness.

5. The Jacobins installed a “system of terror” in September 1793.

A contentious statement. Many historians contest it, pointing out that it wasn’t just the Jacobin deputies in the Convention who voted for terror – it was a policy supported by many deputies. They passed a series of laws which enabled them to use terror. They saw it as justice – albeit the harsh justice of wartime. It was chaotic, ad hoc, and violent certainly, but not a coherent system.

6. The guillotine was the principal means of execution, routinely used from the early stages of the Revolution to hack off the heads of counter-revolutionaries.

No. The revolutionaries of 1789 did not foresee the recourse to violence to defend the Revolution and some, like Robespierre in 1791, wanted the death penalty abolished altogether. Execution by guillotine began with the execution of the king in January 1793. A total of 2,639 people were guillotined in Paris, most of them over nine months between autumn 1793 and summer 1794. Many more people (up to 50,000) were shot, or died of sickness in the prisons. An estimated 250,000 died in the civil war that broke out in Vendée in March 1793, which originated in popular opposition to conscription into the armies to fight against the foreign powers. Most of the casualties there were peasants or republican soldiers.

7. Nobles were subject to execution simply for being nobles.

False. Though nobility was abolished in June 1790 it was never illegal to have been a noble. Some high-profile nobles did die, and many more came under suspicion. Those who fled the country, and became émigrés were subject to execution if they returned. But most held tight and waited for the tide to turn.

8. Robespierre was a dictator who masterminded the ‘Reign of Terror’.

Robespierre’s time in power lasted just one year, from July 1793 to his death in July 1794 in the coup of Thermidor and even in that time he was never a dictator. He shared that power as one of twelve members of the Committee of Public Safety, its members elected by the Convention, which led the revolutionary government. He defended the recourse to terror, but he certainly didn’t invent it.

9. Once you were sent before the Revolutionary Tribunal you had no chance of acquittal – the only outcome was the guillotine.

10. The overthrow of Robespierre in Thermidor (July 1794) was brought about to end the Terror and instil democracy.

No. Robespierre’s fall and execution was engineered by a group of his fellow Jacobins, some of whom were more extreme terrorists than he was, because they thought he was about to call for their arrest and feared for their own lives. They assumed that the terror would continue. As one deputy admitted, Thermidor was not about principles, but about killing. In the turmoil that ensued, moderates were able to regain the initiative and after over 100 of Robespierre’s supporters were guillotined, slowly the terror laws began to be wound down. Successive regimes (the Thermidoreans and the Directory) were not interested in democracy but in keeping the middle classes in power. The Constitution of 1795 reinstated a franchise restricted to men with property.

Featured Image Credit: ‘The Taking of the Palace of the Tuileries, 10 August 1792’, by Jean Duplessis-Bertaux, from the National Museum of the Chateau de Versailles. Public Domain via Wikimedia Commons.

The massacre at Paris