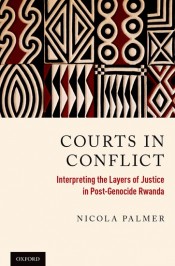 Courts in Conflict: Interpreting the Layers of Justice in Post-Genocide Rwanda

In the wake of political violence, the International Criminal Court (ICC) has shown a clear and continued preference for multiple trials to be pursued at both a national and international level. The Court’s approach to complementarity and its reading of what constitutes ‘a case’ under Article 17 of its Statute lays the legal foundation for this move. For a case to be inadmissible at the international level, the domestic proceeding must concern the same person and substantially the same conduct. Following this it is then necessary to determine whether the state is ‘willing or able’ to genuinely undertake these proceedings.

The outcome is that international and domestic trials can address the same accused and examine overlapping factual incidences as long as it doesn’t amount to substantially the same conduct. When applying this law to instances of mass violence, the outcome is a clear move towards a multiplicity of domestic and international proceedings. Most recently this has resulted in the continuation of the ICC’s case against Simone Gbagbo, the former first lady in Côte d’Ivoire, despite her conviction by a domestic Ivorian court. This interpretation of Article 17 is in line with the wider move in the practice of transitional justice towards ‘holistic’ responses to political violence as practitioners and scholars alike have argued for undertaking domestic processes such as criminal trials, truth commissions, or localised justice initiatives to ‘complement’ international trials. However, it runs counter to the notion of the ICC as a court of last resort and demands a much more careful understanding of the interactions among localised, national, and international justice.

Rwanda offers an early example of multi-level courts operating in concert, through the concurrent practice of the United Nations International Criminal Tribunal for Rwanda (ICTR), the national Rwandan courts, and the gacaca community courts. Although the courts are compatible in law, in so far as they don’t exercise any jurisdictional challenge to one another, they have competed in practice. If the move to multiple domestic and international criminal justice processes is to continue, it is absolutely crucial to take seriously the possibility that the different institutions may offer divergent justifications for their work and this will shape how the courts interact with one another through co-operation, evidence gathering, and in their formal legal decisions.

My research in Rwanda draws on 182 interviews inside of the ICTR, the national Rwandan courts, and the gacaca community courts interviewing judges, lawyers, government officials, and a group of general Rwandan citizens who have been subject to the authority of all three of these courts. Through interviews, coupled with informal discussions and participant observation of the court hearings, the research unravels what Geertz would term the ‘socially established structures of meaning’ that render the legal practice of these courts intelligible — providing a description of how transitional justice has been ‘produced, perceived and interpreted’ by those enacting it and those subject to it.

Such an analysis shows that among the international judges and lawyers, the ICTR was understood to have been principally concerned with the development of international criminal case law, while inside Rwanda the national courts purported to have focused on internal judicial reform. Personnel inside gacaca saw their central contribution as having been towards obtaining a better local understanding of the conflict. It is arguable that the three courts could still have a complementary impact on justice with the ICTR contributing to a global legal order, the national courts to the development of domestic judicial capacity, and gacaca to providing a local mechanism of truth-telling and accountability.

However, the empirical work inside of the courts showed that how one process is justified affects how the others are viewed and understood. How the courts understand their own work elucidates aspects of the institution’s legal culture. It is within this specific legal culture that the work of the other courts is assessed, leading to lost opportunities for effective evidence sharing and points of direct conflict in the courts legal decisions.

Such conflicts recently came to a head in a series of extradition proceeding in the United Kingdom. An understanding of the scepticism articulated by the personnel inside gacaca of both the ICTR and, to a degree, of the national courts helps to explain the local courts’ efforts to insulate themselves from the national and international processes. This had particular implications for a UK High Court that refused the extradition of four men suspected of involvement in the 1994 genocide back to Rwanda in April 2009. During the course of the proceedings it was brought to the attention of the court that two of the suspects, Emmanuel Nteziryayo and Celestin Ugirashebuja, had, in fact, been tried in absentia by the gacaca courts leading to the acquittal of one of the accused.

The judges felt that, given their broader finding that witnesses would be unwilling to testify in defence and their concerns around the independence and impartiality of the national courts, they did not need to deal with the gacaca cases in much detail. Lord Laws and Sullivan simply noted that, “It is not clear whether this surprising turn of events was simply a case of the left hand not knowing what the right was doing, or an indication of something more sinister.” An analysis of follow-up interviews conducted by the Rwandan National Prosecuting office with the gacaca judges involved in these decisions challenges these readings, showing that the localised courts were well aware of what they were doing and actively chose to pursue the hearings to establish a local account of individual involvement in the 1994 violence.

Addressing the relationship between diverse courts adjudicating on individual involvement in the Rwandan genocide remains a live issue. In May this year Charles Bandora was sentenced to 30 years imprisonment by a Kigali High Court following his extradition from Norway in March 2013. While at the same time, Jean Uwinkindi, the first suspect to be successfully transferred from the ICTR to Rwanda, has now requested the annulment of this decision and for his case to be returned to the residual Mechanism for International Criminal Tribunals. In the UK this decisions will inform a Westminster Magistrate Court that is currently considering a renewed application for the extradition of the same four Rwandans, alongside a fifth suspect, following their initial denial of extradition in 2009.

The conflicts among localised, national, and international proceedings should not be underestimated. However, they can be better understood and more effectively responded to if, through a legal pluralist gaze, those involved take seriously the possibility that domestic courts may offer very different justifications for the use of criminal justice than those articulated at the international level.

Nicola Palmer is a lecturer in criminal law at the Dickson Poon School of Law, King's College London and the author of Courts in Conflict: Interpreting the Layers of Justice in Post-Genocide Rwanda. Her broad research interests are in international criminal law, transitional justice, central African studies and legal anthropology. The second chapter "The Rwandan Social Context" is available to read for free for a limited time on Oxford Scholarship Online.

The Geneva Conventions and the minimum standards of humanity