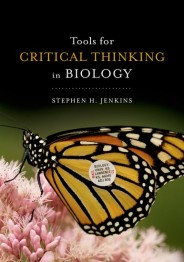 Tools for Critical Thinking in Biology

With more candidates entering the 2016 presidential race weekly, how do we decide which one deserves our vote? Is a good sense of humor important? Should he or she be someone we can imagine drinking beer with? Does he or she share our position on an issue that trumps all others in our minds? We use myriad criteria to make voting decisions, but one of the most important for me is whether the candidate carefully considers all the evidence bearing on the positions he or she advocates.

Recent unprecedented temperatures in India and flooding in Texas remind us that global climate change is an issue that will be more important than ever in the next presidential election. Climate change is also an issue that inspires pronouncements by politicians–sometimes thoughtful but often foolish. What kind of evidence do politicians have in mind when they make these pronouncements?

Jeb Bush was campaigning in New Hampshire on 20 May 2015 when a voter asked about his position on climate change. According to Reuters, he said, “Look, first of all, the climate is changing. I don’t think the science is clear what percentage is man-made and what percentage is natural. It’s convoluted. And for the people to say the science is decided on, this is just really arrogant, to be honest with you.” Is it, in fact, arrogant to say “the science is decided?” What does it mean for the science to be decided, and what is the evidence about this?

Is it, in fact, arrogant to say ‘the science is decided?’ What does it mean for the science to be decided, and what is the evidence about this?

Bush was talking about the scientific consensus that many aspects of climate are changing due in large part to human activities that add greenhouse gases to the atmosphere. The most thorough evidence for this consensus was reported by John Cook and eight colleagues in Environmental Research Letters in 2013. Cook’s group analyzed almost 12,000 peer-reviewed books and papers in the scientific literature and reported that 97% of those that took an explicit position agreed with the Intergovernmental Panel on Climate Change, concluding that humans cause global warming.

“The science is decided,” in Bush’s terms, doesn’t mean that scientists understand everything about climate change or that they are unanimous about the causes and consequences of climate change. On the contrary, global climate change is a very active area of research with new discoveries reported every month. “The science is decided” does mean that the basic causes of climate change are well understood and the contributions of fossil fuel use to climate change in the past 100 years are well documented. Likewise, a consensus of 97% doesn’t mean that the remaining 3% includes some brilliantly creative scientists poised to revolutionize climate science. Most of us know that the Earth is round, but members of the Flat Earth societies that still exist in the twenty-first century aren’t going to change that fact.

How can those of us who aren’t climatologists evaluate this consensus among climate researchers that humans cause global warming? Let me suggest an analogy. Suppose you visit your doctor for an annual checkup, and she says that your blood test shows more white blood cells than normal, suggesting a bone marrow biopsy to test for leukemia. Unfortunately, the biopsy is positive and she refers you to an oncologist, who suggests a bone marrow transplant with a modest chance of success. You decide to get a second opinion. This oncologist agrees with the first, so you seek a third opinion. This oncologist also agrees, so you travel to a different part of the country for a fourth opinion. This continues until you’ve seen 50 oncologists, all of whom agree with the diagnosis and treatment. Now you decide that you should try some doctors in different countries. Since you have unlimited financial resources, you decide that you’ll get 100 opinions from around the world before deciding what to do. After several months, you’ve seen 97 oncologists who agree with the original one that you have leukemia and that a bone marrow transplant is indicated, but three who think that everything is fine and you don’t need any treatment. What would you decide? There’s a strong consensus that you have leukemia and need a transplant; if you reject the evidence of this consensus, it suggests that you have very strong motives to refuse the treatment in spite of the consensus. Similarly, people may reject the scientific consensus about global climate change because they have strong incentives to reject the “treatment”–controlling emissions of greenhouse gases.

“The science is decided” is shorthand for the overwhelming scientific consensus about the basic facts of climate change. Bush called it “really arrogant” to say the science is decided. Commentators such as Timothy Egan of the New York Times thought Bush was referring to scientists here, but it seems more likely in this case that he was referring to President Obama, who told Coast Guard Academy graduates on the same day that “the science is indisputable.” Perhaps Obama should have been more precise and said “the basic science of climate change is indisputable.”

Another candidate for president, Ted Cruz, demonstrated real arrogance in March 2015 when he compared himself to Galileo. “It used to be [that] it is accepted scientific wisdom the Earth is flat, and this heretic named Galileo was branded a denier,” he commented. In fact, Galileo was branded a heretic by the Catholic Church in 1633 because he relied on the scientific method to test his beliefs rather than simply accepting traditional beliefs on faith. It’s ironic that Cruz and other ostensibly religious politicians who deny the evidence for climate change align themselves with the seventeenth century Church of Pope Urban rather than the twenty-first century Church of Pope Francis.

Stephen H. Jenkins is an Emeritus Professor of Biology at the University of Nevada, Reno, where he taught courses in ecology, mammalogy, and research design, as well as an introductory course for nonmajors emphasizing critical thinking. He is the author of Tools for Critical Thinking in Biology and How Science Works: Evaluating Evidence in Biology and Medicine.

Five books on climate change you need to read