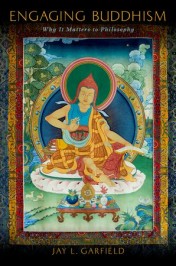 Engaging Buddhism: Why it Matters to Philosophy

Buddhist moral psychology represents a distinctive contribution to contemporary moral discourses. Most Western ethicists neglect to problematize perception at all, and few suggest that ethical engagement begins with perception. But this is a central idea in Buddhist moral theory. Human perception is always perception-as. We see someone as a friend or as an enemy; as a stranger or as an acquaintance. We see objects as desirable or as repulsive. We see ourselves as helpers or as competitors, and our cognitive and action sets follow in train.

We can explain or express this in the Buddhist language of sparsa (contact), vedanā (hedonic tone), samjña (ascertainment), chanda (action selection) and cetanā (intention). Every perceptual episode, while it might begin with sensory contact, has some hedonic tone. We experience the object with which we have contact on a continuum from pleasurable to distasteful. Perception involves ascertainment–the representation of the object perceived as of a kind. This ascertainment and hedonic tone lead us to ready action appropriate to the object and its affective valence, and as we do so, we form an intention to act, perhaps before we even become aware that we do so. Perception is always part of a contact-cognition-action cycle in which there is no bare awareness of an object disjoint from our interests or affect.

It is hard to avoid the conclusion that perception itself is morally charged. If I see women as tools, or Latinos as fools, the damage is done. That perception involves the formation of intentions that are morally problematic on their face, and that lead to harms of all kinds. Perceiving in that way makes me a morally reduced person. If, on the other hand, I perceive people as opportunities to cooperate, or to provide benefit, I perceive in a way that involves the construction of morally salutary intentions, good on their face, and productive of human goods. For this reason, much Buddhist ethical discourse eschews the articulation of duties, rules or virtues, and aims at the transformation of our mode of perceptual engagement with the world. Moral cultivation, on this view, is the cultivation of a way of seeing, not in the first a instance a way of acting.

The importance of moral perception is well-illustrated by the phenomenon of implicit bias. Since Greenawald et al. (1998) a raft of evidence has demonstrated both the omnipresence and the pernicious effects of implicit bias. Implicit bias—the subliminal association of negative traits with members of groups that are the victims of bias and positive traits with dominant groups—is evident in the implicit bias association task, in experiments asking professionals to evaluate resumés with stereotypical names, in salary decisions regarding candidates of opposite genders, in tasks asking participants to identify objects carried by individuals in rapid presentation, in medical decisionmaking, etc. It is far too widespread, and far too robust a finding to be dismissed. While it is possible to reduce the effect of implicit bias through training, that training must be regular, and must be regularly repeated if the effects are to be significant or lasting, and the most effective methods in reducing implicit bias are affective, not cognitive. Changing people’s explicit beliefs or attitudes, and even making them aware of their own implicit bias has no real effect. Only training that involves changing the immediate affective valence of the perception of others has any lasting effect.

Implicit bias demonstrates that the roots of virtue and vice, or of good and evil lie not in what we do, but in how we see. The fact that in the moment we have no control over our implicit bias may excuse us from culpability of that bias in the moment, but it does not excuse us from responsibility to transform ourselves so as to eliminate that bias. Involuntariness, that is, may excuse the act, but it does not absolve us of moral blameworthiness. The same goes, mutatis mutandis, for morally salutary perceptual sets. We have an obligation, once we recognize our implicit biases, to remediate them. We cannot reflectively endorse being the kind of person who perceives the world in this way.

Implicit bias is only the tip of the moral iceberg of our perceptual lives. The very processes that are salient when we investigate racial or gender bias in these disturbing studies are ubiquitous in our psychology. It is not only racial stereotyping that is problematic; the representation of Maseratis as desirable, or of insect protein as undesirable may be just as morally charged, and just as deeply implicated in perceptual processes. And the powerful effects not merely of implicit social pressures at work in the cases of racial stereotyping, but also the deliberate efforts of advertisers, demagogues, preachers and moral philosophers to distort our perception must be morally scrutinized, for just as implicit bias demonstrably distorts our explicit reasoning and judgments in invidious ways, the panoply of subliminal processes to which it is kin have the same effect across the domains in which agency is manifest.

A Buddhist moral psychology shows us just how and why our moral lives begin with perception, and Buddhist meditative practices provide an avenue to eradicate the vices of perception and to encourage more virtuous ways of seeing the world.