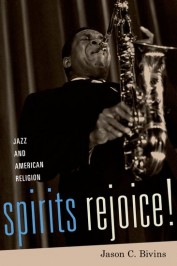 John Coltrane’s A Love Supreme, which the famed saxophonist performed live only once, has the distinction of being one of jazz’s most widely celebrated yet imperfectly understood recordings. At its half-century, the devotional piece is seen as the culmination of Coltrane’s “dark night of the soul,” the sound of his heroic overcoming, and his personal entreaty to the divine. None of this is wrong, but lost is the resonance the album would have beyond its own musical particulars and its potential significance for the study of American religions and jazz. If we examine Coltrane’s own development following its release, as well as the recording’s subsequent history, we see that A Love Supreme captures a series of abiding religiosities within jazz itself. Thus, the album is not just an aural formatting of a particular religiosity, but an ongoing lens through which to propose new ways of hearing and locating religion.

By the mid-1950s, Coltrane was legendary for his “monastic” practice habits. After a period of difficulty, he experienced what he called a “spiritual awakening.” At his lowest point, Coltrane prayed to God to give him the capacity to bring people joy through music. From this point, Coltrane gave up his vices, and vowed to “dedicate his music to God, in whom he believed with increasing involvement.” The music he created between the late 1950s and his death in 1967 was increasingly exploratory, in ways that paralleled his religious investigations. As he got further from established chord structures and harmonic constraints, Coltrane read obsessively. After a period of doubt represented by 1964’s searching Crescent, A Love Supreme represents the crowning achievement in Coltrane’s self-discovery, a sonic offering to the One. His music moved beyond elongated modalism into an exultant, shouting sound that found Coltrane moving outwards into an area defined by its own motivic urgency and propulsion. Consisting of four movements – “Acknowledgment,” “Resolution,” “Pursuance,” and “Psalm” – this record marked the beginning of Coltrane’s movement, over his final three years, into a galvanic, questing, at times stratospheric music.

The suite itself has had a curious, multiple life since its release. A Love Supreme is heard, first and foremost, as Coltrane’s own mystical poetry. Ostensibly beyond specific reference, it is often adduced as the sound of African-American Christianity meshed with the growing appetite for Asian religions in the mid-1960s. Yet as important as the work was to Coltrane and his audience, its significance may actually be in its scrambling of such associations and settled formations. Coltrane started hearing sound as emanating from an agentive power beyond him. He read Edgar Cayce, Madame Blavatsky, and Cyril Scott’s Theosophical book Music: Its Secret Influence Through the Ages, scientific and mathematical theory, the New Testament, and Hazrat Inayat Khan’s The Mysticism of Sound and Music. He became influenced by the notion – popular among Swedenborgians, Theosophists, and various mystical traditions – that insight was to be gained by establishing correspondences between temporal-physical locations, musical tones, and celestial spheres. Yet many of his key influences (like Khan) disdained jazz, dismissing it as “decadent” and unworthy of religiosity.

A Love Supreme is also heard as inaugurating a tradition. Certainly there is much evidence for this in the establishment of the Saint John Coltrane African Orthodox Church in the 1970s. In 1970s San Francisco, the Pentecostal-reared Bishop Franzo King had what he avows was a religious awakening while listening to A Love Supreme. King was inspired by his “sound baptism” to begin a ministry, combining social outreach with a fusion of traditional liturgy with veneration of Coltrane-as-saint and its use of A Love Supreme in services. But the record crosses and blends traditions in many ways. This is true not just in Coltrane’s combination of multiple musics and religiosities, or in its exemplification of the “seeker” spirituality that throve during the high point of his career. It is also visible in the album’s own crossings beyond jazz: into the MC5’s use of pure sound, into La Monte Young’s eternal drone, and into Alice Coltrane’s late writings for Hindu devotional settings, along with a broader range of religio-musical institutions in American life.

A Love Supreme is finally heard as a musical template, an expressive model for those who would follow it into constructing “religion” from improvised materials. Beyond the regular assertions of Coltrane’s divine inspiration, the notion that the religious must be indexed as overtly as on A Love Supreme if it is to be acknowledged sits awkwardly not only in the study of religion, but in the richly multifaceted history of jazz and religion both prior and subsequent to Coltrane. Coltrane rarely played music quite so structured as “Acknowledgment,” “Resolution,” “Pursuance,” and “Psalm” after this album. The attempt to reckon with religion and jazz through this album’s influence reveal limits quickly hurdled.

Coltrane, his band, and his contemporaries were also clearly aware of the album’s resonance within a wider soundscape of not simply American religious music but continual efforts by jazz musicians to articulate the sonic divine, to establish improvising rituals, to narrate African-American religious history against detractors, crafting musical metaphysics, or cultivating musical relations with sacred presence. A Love Supreme announces this breadth, drawing together some of these pursuits in a formally legible and discursively direct expression whose significance is best understood as part of an abundant, generative genealogy of improvisations of, toward, and on religions, in all of their multiplicity, in the family of music contentiously called (and denounced as) jazz. Just as Coltrane’s music gave us new ways of hearing possibility in that dusty singularity, jazz, so does A Love Supreme give us keys and cues for understanding beyond its own particulars — the ways jazz has improvised on that other moldy singularity, religion.

Jason C. Bivins is Professor of Religious Studies at North Carolina State University and is an accomplished jazz guitarist. He is author of Spirits Rejoice!: Jazz and American Religion.