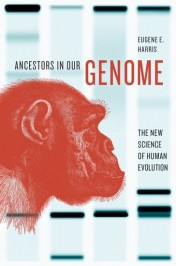 Ancestors in Our Genome: The New Science of Human Evolution

Analyses of Neanderthal genomes indicate that when anatomically modern humans ventured out of Africa around 50,000 years ago, they met and mated with Neanderthals, probably in regions of the Eastern Mediterranean. We know that Neanderthals inhabited regions of Eurasia during the recent ice ages for a period of over 200,000 years and finally became extinct around 40,000 to 35,000 years ago. Today, when we examine the genomes of Europeans and Asians, we find that about 2% of their genomes consist of Neanderthal fragments. Africans either do not have or have very small percentages of Neanderthal DNA, probably due to limited interbreeding between Eurasian peoples and Africans in more recent times.

In general, the fraction of Neanderthal DNA in Eurasians is very small, indicating that modern humans interbred with Neanderthals only over a limited geographic area and period of time, perhaps in the zone where we first met. Additionally, it is possible there was rather strong avoidance to mating, perhaps based on different appearances or social behaviors. Moreover, it is quite possible that hybrids between Neanderthals and modern humans suffered reduced fertility.

Though the fraction is small, genomes are vast. Thus, even 2% Neanderthal DNA in Eurasian genomes totals nearly 60 million bases of DNA – the A, C, G and Ts. So, what are the functional effects of this Neanderthal DNA on our biology? Was the DNA we inherited from our ancient Neanderthal parents harmful to us or was it beneficial to us?

How did the Neanderthal segments become distributed in such a lopsided way within our genome? One way is through the action of negative selection, that process of natural selection that weeds out harmful DNA. Over the 2,000 generations since humans interbred with Neanderthals, negative selection seems to have been hard at work removing Neanderthal DNA from the functional parts of our genome though leaving it in regions where it has no biological effect. What could account for the dramatic reduction of Neanderthal DNA on human X chromosomes? The pattern could be explained if male hybrid offspring between mating’s of modern humans and Neanderthals had reduced fertility. Genes located on male hybrid X chromosomes may not have been compatible with the set of chromosomes inherited from the “other” parent. It is well known that hybrids of the heterogametic sex (the male sex in most mammals, having X and Y chromosomes) suffer reduced fertility much more than female hybrids do. The thinking is that because female hybrids have two X chromosomes, any one of these can cover up for harmful effects the other X chromosome might cause, whereas males with only one X chromosome are left “exposed.” Consistent with the idea that male hybrids had low fertility is the finding that human genes expressed in testes contain 20 to 100 times less Neanderthal DNA compared to genes expressed in other organs such as kidney, liver, heart, or brain.

There is additional evidence indicating that Neanderthal genes might be harmful in modern day peoples. A number of Neanderthal genes in Eurasians appear to contribute to various chronic diseases such as lupus, chronic inflammation of the bile ducts, Crohn’s disease, reduced optic disc-size, and type 2 diabetes. A quite tantalizing finding is that one Neanderthal gene inherited by some Europeans seems to decrease the ease of quitting smoking.

So, was any of the DNA we inherited from Neanderthals good for us? Modern humans spread relatively rapidly into territories of Eurasia, regions that Neanderthals had already inhabited for over 200,000 years. Therefore, it’s probably true that Neanderthals had already become sufficiently adapted to survive in Eurasian environments and that some of their genes would be beneficial to modern humans. Upon interbreeding with Neanderthals, these favorable genes could have spread within modern human populations by a second type of natural selection, called positive natural selection.

Although work is ongoing, and we undoubtedly have much to learn, when we analyze large numbers of genomes from Europeans and Asians (determined by the ongoing 1000 Genomes Project), certain regions inherited from Neanderthals bear signs that they are biologically functional in human individuals, and in some cases even became more common in Eurasian populations suggesting they were beneficial.

The list of potentially beneficial Neanderthal genes fall into several categories: genes coding for aspects of skin and hair, genes involved in galactose metabolism (possibly related to a newborn’s ability to digest mother’s milk), genes related to long-term depression (possibly related to cerebellar learning), genes involved in immune defense, and genes involved in lipid-digestion. That modern humans inherited immune defense genes and lipid-digestion genes from Neanderthals does not seem too surprising as humans would have benefited greatly from any genes that helped them fight new pathogens and or digest new foods they encountered as they colonized Europe and Asia. Skin and hair genes relate to pigmentation, skin-cell differentiation, and the skin-protein keratin. With regard to keratin genes, it appears that different sets of keratin genes from Neanderthals were greatly favored in different populations. We are not sure of the reasons, but Europeans seemed to have favored Neanderthal-derived genes coding for keratin filaments in skin, whereas East Asians favored genes linked to keratin filaments in hair.

There is much we have to learn about the Neanderthal DNA in us. Through investigating some its harmful effects, we might get a better handle on why Neanderthals ultimately vanished. On the other hand, it is heartening to know that at least some Neanderthal DNA in our genomes seems to have helped us along our evolutionary journey.

Eugene E. Harris is Professor of Biological Sciences and Geology at the City University of New York, and a Research Affiliate of the Center for the Study of Human Origins at New York University. He is the author of Ancestors in Our Genome: The New Science of Human Evolution.

Darwin’s theory of agency: back to the future in evolutionary science?

Ants are picky when using tools for foraging