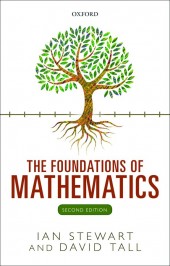 The Foundations of Mathematics

Mathematics is used in increasingly sophisticated ways in modern society, explicitly by experts who develop applications and implicitly by the general public who use technological devices. As each of us is taught a broad curriculum in school and then focuses on particular specialisms in our adult life, it is useful to ask the question ‘what does it mean to make sense of mathematics?’. Each of us will have personal needs to make sense in appropriate ways.

Initially ‘making sense of mathematics’ means what it says, namely to use our senses to organize the patterns we see and to make sense of the operations we perform in arithmetic. As we grow more sophisticated we use language to become more precise about the properties of geometrical figures and of numbers in arithmetic that lead on to algebra and beyond. Making sense of mathematics builds on our experiences and can take us on into a variety of different contexts in adult life.

Sometimes this means making sense of a particular situation and making a mathematical model by formulating principles that arise from the nature of the situation. At the very highest level, Newton thought very deeply about moving bodies and homed in on simple properties that led to his laws of motion. Einstein imagined a thought experiment sitting on a train moving at nearly the speed of light to produce his theory of special relativity. Stephen Hawking thought about the expanding universe to think back in time to when the universe began with a big bang.

For most of us, as our understanding of mathematics grows, we begin with everyday ideas and notice patterns that can be understood in mathematical ways. For instance in the arithmetic of whole numbers, we might multiply the same number together several times, say 2x2x2 and write it down as ‘two to the power of three’, symbolized as 23. Then we see that multiplying 23 by 22 is (2x2x2)x(2×2), so that 23+2 = 25 and we recognize the pattern that may be expressed algebraically as xm+n = xmxn that works for any number x and any whole numbers m, n.

Then we make a leap: what happens if we use this observation in the case where m, n are negative numbers or fractions? This gives new possibilities such as x1/2+1/2 = x1 suggesting that x1/2 is the square root of x. It leads to a more powerful development in mathematics that is valuable for some but can cause serious problems for those who think of xn as multiplying n copies of x together: this does not make any sense if n is a fraction or a negative number.

Such changes in meaning happen more often than we may realize. For example, in dealing with simple arithmetic, taking something away gives a smaller answer. But when negative numbers are introduced, taking away a negative number gives a bigger result. Squaring a non-zero number gives a positive result, but introducing complex numbers gives i2 =–1.

As mathematics becomes more sophisticated, natural mathematics, based on our human experience and imagination needs to take account of new ways of thinking. A new kind of formal mathematics evolves that is encountered by students in pure mathematics at university. Mathematics in a particular context is presented in terms of assumed properties (axioms) from which other properties are deduced (as theorems). Many such theories have already been invented: group theory, vector spaces, mathematical analysis, algebraic number theory and so on. Undergraduate pure mathematics introduces these theories and involves the student in making sense of the deductive practices to build a coherent theory in each topic. This has the advantage that properties proved as theorems now remain true not only in familiar situations but also in any new situation where the axioms are satisfied.

Making sense of formal mathematics is not just a one-way process that starts with axioms and proves theorems that can be used in applications. It also works in the reverse direction. Special theorems (called structure theorems) may be proved to show that a given axiomatic system has properties that can be sensed visually through drawing pictures and operationally using operations formulated in the axioms. This links formal theories back to natural ways of using our human senses and operations, now operating at a more sophisticated level supported by the formal theory.

Making sense of mathematics in applications — in physics, engineering, economics, business studies, weather prediction, and so on — involves translating the particular characteristics of the context and formulating mathematical models to solve problems and to construct more sophisticated theories with new applications.

Currently we are experiencing an amazing explosion of technology that grows in sophistication at an enormous pace. Pure mathematics builds ever broadening formal theories, requiring more subtle theoretical foundations to support ever-widening branches of theory and practice. As the tree of mathematical knowledge grows greater superstructure, it also needs to strengthen its foundational roots.

Sense making in mathematics as a whole is therefore not a static state of understanding. Each of us needs to find our own way of progressing in mathematics for our own purposes. Sometimes this may involve learning what to do to cope with a given situation, however, in the longer term it is more profitable to make an effort to make sense of mathematics in successive new contexts. This may involve sufficient insight to operate in a given social environment, to deal with a particular topic in a technical context or a formal interest in pure mathematics. Mathematics as a whole builds from our human perception and operation, becoming more sophisticated through the development of language and formal theories that evolve in both theory and practice.