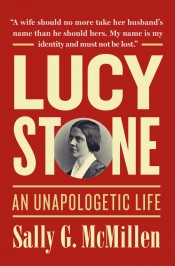 A gifted orator, Lucy Stone dedicated her life to the fight for equal rights. Among the earliest female graduates of the Oberlin Collegiate Institute in Ohio, she was the first Massachusetts-born woman to earn a college degree. She rose to national prominence as a well-respected public speaker – an occupation rarely pursued by women of the era. Despite vocal protestations about marriage, motherhood, and the ties that bound women to domesticity, Stone eventually married and raised a daughter, Alice, nevertheless remaining an active leader of the nineteenth-century equal rights movement. Though her name is not as recognizable as other participants – such as Susan B. Anthony and Elizabeth Cady Stanton – her contribution to their common cause is undeniable.

Below, we introduce Stone’s life and legacy in a series of definitive events, excerpted from Lucy Stone: An Unapologetic Life by historian Sally G. McMillen.

Featured image: A National American Woman Suffrage Association check, hand-written by Harriet Taylor Upton as the Association’s treasurer and counter-signed by Susan B. Anthony as president and Alice Stone Blackwell as recording secretary. Image courtesy of the National Numismatic Collection at the Smithsonian Institution. CC BY-SA 3.0 via Wikimedia Commons.

Sally G. McMillen is the Mary Reynolds Babcock Professor of History at Davidson College. Her books include Seneca Falls and the Origins of the Women's Rights Movement, Motherhood in the Old South: Pregnancy, Childbirth, and Infant Rearing, To Raise Up the South: Sunday Schools in Black and White Churches, 1865-1915, and, most recently, Lucy Stone: An Unapologetic Life.

How women really got the vote

Why we need more biographies of suffragists