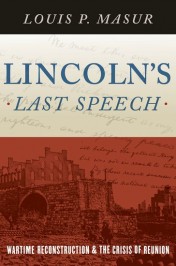 Lincoln's Last Speech: Wartime Reconstruction and the Crisis of Reunion

Leaving behind a legacy that transcends generations today, Abraham Lincoln was a veteran when it came to giving speeches. Delivering one of the most quoted speeches in history, Lincoln addressed the nation on a number of other occasions, captivating his audience and paving the way for generations to come. Here is an in-depth look at Lincoln’s eleven greatest speeches, in chronological order.

Lincoln made an argument against the Kansas-Nebraska Act and the repeal of the Missouri Compromise. He spoke for three hours, and offered a relentless assault upon the logic and morality of slavery: “If the negro is a man, why then my ancient faith teaches me that ‘all men are created equal’; and that there can be no moral right in connection with one man’s making a slave of another.” Five years later, in a campaign autobiography, he declared, “I was losing interest in politics, when the repeal of the Missouri Compromise aroused me again. What I have done since then is pretty well known.”

Lincoln gave the speech after being nominated by the Republican Party as candidate for Senator of Illinois. He would lose the contest to Stephen Douglas, but not before making himself into a notable national political figure. Famously he declared, “’A house divided against itself cannot stand.’ I believe this government cannot endure, permanently half slave and half free. I do not expect the Union to be dissolved—I do not expect the house to fall—but I do expect it will cease to be divided. It will become all one thing, or all the other.”

Lincoln came east to give what he knew would be a major address at the Cooper Institute. In the speech, he presented his research to argue that Congress had the power to prohibit slavery in the territories and that Southerners, not Northerners, were the ones who, in advocating secession, had rejected the policies of the Founding Fathers. He ended with a rousing message to his fellow Republicans: “Let us have faith that right makes might, and in that faith, let us, to the end, dare to do our duty as we understand it.”

Elected to the Presidency, Lincoln faced an unprecedented crisis as he prepared to leave Springfield for his inauguration. Seven states had seceded and it appeared as if the Union was to be dissolved. In what is known as his farewell address, he spoke at the railroad depot to those gathered to send him off. Here are his remarks, as finalized after the train pulled away:

“My friends — No one, not in my situation, can appreciate my feeling of sadness at this parting. To this place, and the kindness of these people, I owe every thing. Here I have lived a quarter of a century, and have passed from a young to an old man. Here my children have been born, and one is buried. I now leave, not knowing when, or whether ever, I may return, with a task before me greater than that which rested upon Washington. Without the assistance of the Divine Being who ever attended him, I cannot succeed. With that assistance I cannot fail. Trusting in Him who can go with me, and remain with you and be everywhere for good, let us confidently hope that all will yet be well. To His care commending you, as I hope in your prayers you will commend me, I bid you an affectionate farewell.”

No inaugural address has ever been delivered under more trying circumstances. Lincoln explained why he would never accept the legality of secession, tried to reassure Confederates that they had nothing to fear from his Presidency, and yet made clear that while he would not provoke a fight he would defend the Union. In his final appeal he moved from policy to poetry:

“I am loath to close. We are not enemies, but friends. We must not be enemies. Though passion may have strained it must not break our bonds of affection. The mystic chords of memory, stretching from every battlefield and patriot grave to every living heart and hearthstone all over this broad land, will yet swell the chorus of the Union, when again touched, as surely they will be, by the better angels of our nature.”

Invited to speak at a rally of Union men in Springfield, Lincoln explained he could not attend but instead sent a letter. He instructed James C. Conkling, former mayor of Springfield, to “read it very slowly.” Lincoln offered a robust defense of the Emancipation Proclamation that he had issued on 1 January 1863 and which included a provision for the enrollment of black troops. In the aftermath of Gettysburg and Vicksburg, Lincoln had peace on his mind and he gazed into the future:

“Peace does not appear so distant as it did. I hope it will come soon, and come to stay; and so come as to be worth the keeping in all future time. It will then have been proved that, among free men, there can be no successful appeal from the ballot to the bullet; and that they who take such appeal are sure to lose their case, and pay the cost. And then, there will be some black men who can remember that, with silent tongue, and clenched teeth, and steady eye, and well-poised bayonet, they have helped mankind on to this great consummation; while, I fear, there will be some white ones, unable to forget that, with malignant heart, and deceitful speech, they have strove to hinder it.”

“Four score and seven years ago our fathers brought forth on this continent, a new nation, conceived in Liberty, and dedicated to the proposition that all men are created equal.

“Now we are engaged in a great civil war, testing whether that nation, or any nation so conceived and so dedicated, can long endure. We are met on a great battle-field of that war. We have come to dedicate a portion of that field, as a final resting place for those who here gave their lives that that nation might live. It is altogether fitting and proper that we should do this.

“But, in a larger sense, we can not dedicate — we can not consecrate — we can not hallow — this ground. The brave men, living and dead, who struggled here, have consecrated it, far above our poor power to add or detract. The world will little note, nor long remember what we say here, but it can never forget what they did here. It is for us the living, rather, to be dedicated here to the unfinished work which they who fought here have thus far so nobly advanced. It is rather for us to be here dedicated to the great task remaining before us — that from these honored dead we take increased devotion to that cause for which they gave the last full measure of devotion — that we here highly resolve that these dead shall not have died in vain — that this nation, under God, shall have a new birth of freedom — and that government of the people, by the people, for the people, shall not perish from the earth.”

During his presidency, Lincoln delivered only three speeches outside of Washington. The first was at Gettysburg. Baltimore was the second. The third would come in Philadelphia two months later. In both Baltimore and Philadelphia he spoke at Sanitary Fairs, events organized to raise money to support the troops. When the war began, Union troops were assaulted passing through Baltimore; now the President spoke there. “The world moves,” Lincoln observed as he offered a striking analogy to explain different understandings of liberty:

“The shepherd drives the wolf from the sheep’s throat, for which the sheep thanks the shepherd as a liberator, while the wolf denounces him for the same act as the destroyer of liberty, especially as the sheep was a black one. Plainly the sheep and the wolf are not agreed upon a definition of the word liberty; and precisely the same difference prevails to-day among us human creatures, even in the North, and all professing to love liberty. Hence we behold the processes by which thousands are daily passing from under the yoke of bondage, hailed by some as the advance of liberty, and bewailed by others as the destruction of all liberty. Recently, as it seems, the people of Maryland have been doing something to define liberty; and thanks to them that, in what they have done, the wolf’s dictionary, has been repudiated.”

Lincoln feared he would not be reelected, but when he was overwhelmingly returned for a second term he took the time to offer more than a few spontaneous remarks. He used the occasion to discuss the meaning of democracy:

“We can not have free government without elections; and if the rebellion could force us to forego, or postpone a national election, it might fairly claim to have already conquered and ruined us…. Human-nature will not change. In any future great national trial, compared with the men of this, we shall have as weak, and as strong; as silly and as wise; as bad and good. Let us, therefore, study the incidents of this, as philosophy to learn wisdom from, and none of them as wrongs to be revenged.”

The second inaugural has received nearly as much attention at the Gettysburg Address. As evidenced from his reelection speech, Lincoln had revenge and mercy on his mind. In the second inaugural, Lincoln spoke of the reasons for the war, which was now winding its way toward Union victory. He also spoke about God and Christian forgiveness: “Let us judge not that we not be judged,” he intoned. The closing is as fine as anything he ever wrote or spoke:

“With malice toward none, with charity for all, with firmness in the right as God gives us to see the right, let us strive on to finish the work we are in, to bind up the nation’s wounds, to care for him who shall have borne the battle and for his widow and his orphan, to do all which may achieve and cherish a just and lasting peace among ourselves and with all nations.”

Lincoln waited two days after the surrender at Appomattox to speak. He wrote the first two paragraphs that day and drew for the rest of the speech on material he had written two months earlier in support of the readmission of Louisiana, which had adopted a new state constitutions that abolished slavery. He opened, “we meet this evening, not in sorrow, but in gladness of heart.” It was classic Lincoln. Modest, reserved, even in victory. “Not in sorrow.” Lincoln had known so much of it in his life and throughout the war. “Gladness of heart” was something quite different from happiness. Lincoln looked ahead to the reconstruction of the nation, but it would take place without his wisdom and guidance.

Louis P. Masur is Distinguished Professor of American Studies and History at Rutgers University. He is the author of many books, including Lincoln's Last Speech, The Civil War: A Concise History, and Lincoln's Hundred Days: The Emancipation Proclamation and the War for the Union.