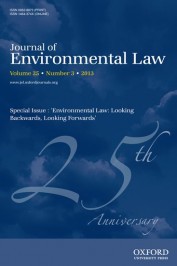 Explore our 2015 Earth Day virtual collection of journal articles, including three from Journal of Environmental Law. The Journal of Environmental Law is delighted to be involved in initiating a further conversation about these issues through its support of a judicial workshop and two public lectures this September. These events are organised by the Dickson Poon School of Law, KCL, in association with the UK Supreme Court. The aim of these events is to engage fully with the adjudicative challenges posed by climate change, so that lawyers and judges can begin to understand how best to respond to them.

It is now commonly recognized by governments that climate change is an issue that must be addressed. The 21st Conference of Parties to the United Nations Framework Convention on Climate Change to be held in Paris in December 2015 is the most high profile example of this, but there are also many examples of governments beginning to craft national and supranational regulatory responses. Climate change has also begun to give rise to many different types of litigation and there is a rich literature charting this.

The ‘super wicked’ characterization of climate change as a scientific problem has resulted in a determined focus on finding solutions. Regulatory talk is in terms of catchphrases: ‘mitigation’, ‘adaption’, ‘prevention.’ Court cases are understood as victories or defeats for litigants attempting to promote action in relation to climate change. And the international treaty process is seen as the ultimate panacea.

Regulation and international treaties are important, but equally important is to understand exactly what type of problem climate change is. Only with that understanding can long-lasting legal responses to climate change be developed. There are many different social dimensions to climate change as a problem but the most obvious to us as lawyers is its impact upon the everyday operation of law and governance.

Within legal orders, we have well-established doctrines, means of regulation, and dispute resolution procedures that provide the starting point for dealing with social problems and disputes, including those affected by climate change. Even if we create new climate change regimes, the background legal culture does not disappear. For example, principles such as the rule of law and separation of powers are constitutional bedrocks of many legal systems and any action in relation to climate change must be judged against them. Yet the identification of, and response to, climate change as a legal problem does not always sit easily with these existing principles, doctrines, and frameworks. This can particularly be seen by focusing on the growing body of case law concerning climate change. These cases are interesting because courts and other adjudicative bodies are places in which social conflicts caused by climate change surface and manifest as legal problems, and which provide legitimate and peaceable means for their resolution. Understanding the adjudication of climate change issues is thus both socially and legally important and involves delving into at least three challenging legal issues.

First, there is the overarching question of whether law can and should recognize climate change as a problem and develop a response to it. Climate change does not fall easily into a pre-existing category of harm recognized by the law. It relates to future harm, which is dispersed across the globe. To establish the cause of such harm requires the use of complex computer models and tackling uncertainties. Climate change is the product of multiple agents working in an interdependent global market economy. Agents can argue that their contribution to climate change is just a ‘drop in the ocean’ that should not attract legal consequences. Dealing with climate change forces us to think about how law makes sense of the facts of a case, rules of evidence, concepts of causation, and about a reasonable basis for regulatory action. The precautionary principle has become a high profile legal principle because it is directly concerned with the factual basis of public decision-making. Its controversial status highlights the intractability of these ‘factual’ issues.

Second, even if climate change is recognized as a problem, it still presents a series of difficult legal issues as courts and legal decision-makers are drawn into responding to it. Political will in relation to climate change has not been strong and much litigation concerning climate change has been about catalyzing action. But demands for action come up against pre-existing doctrines concerning standing, substantive legal doctrines relating to legal responsibility, judicial conventions of comity and constitutional restraint, and the fact that the traditional vehicle for public action is the nation state. Furthermore, there is a fundamental question of which courts, in which countries, are appropriate forums for dealing with climate change-related issues, and how different courts should interrelate on these issues (if at all).

Third, if new regulatory regimes are developed to respond to climate change, they often create novel regulatory schemes of which lawyers struggle to make sense. Emission trading schemes are a good example. Our understanding of these complex legal devices is malleable and contested, as has been seen in the case of the European Union Emissions Trading System (EU ETS), which has given rise to a complex body of case law about its nature and scope. The social and legal challenges created by climate change are not resolved by clever regulatory schemes.

All of this might sound faintly depressing. Can’t we talk of solutions rather than probing the problems in more detail? But, what a study of climate change litigation makes clear is that courts across the world are finding that arguments are being made before them that they cannot ignore. They must take them seriously and they must find a path through the questions identified above so that they can act as adjudicators. Climate change thus forces us to take a very hard look at what adjudication is, and in particular what legitimate adjudication is. What climate change related issues should different courts decide? What type of reasoning should they use to decide them? What legal limitations need to be overcome for courts to act as proper adjudicators of climate change disputes?

Liz Fisher is General Editor of the Journal of Environmental Law and Professor of Environmental Law in the Faculty of Law, University of Oxford. Dr Eloise Scotford is Senior Lecturer in the Dickson Poon School of Law, King's College London. Emily Barritt is a Research Assistant and Project Officer at King’s College London’s School of Law working for Lord Phillips and Lord Judge.

Explore our 2015 Earth Day virtual collection of journal articles, including three from Journal of Environmental Law. All articles will be free online until July 31st. The Journal of Environmental Law is delighted to be involved in initiating a further conversation about these issues through its support of a judicial workshop and two public lectures this September. These events are organised by the Dickson Poon School of Law, KCL, in association with the UK Supreme Court. The aim of these events is to engage fully with the adjudicative challenges posed by climate change, so that lawyers and judges can begin to understand how best to respond to them.