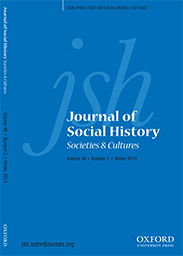 The Journal of Social History has served as one of the leading outlets for work in this growing research field since its inception over 40 years ago. JSH publishes articles in social history from all areas and periods, and has played an important role in integrating work in Latin American, African, Asian and Russian history with sociohistorical analysis in Western Europe and the United States.

Delmonico’s in New York opened in the 1830s and is often thought of as the first restaurant in the United States. A restaurant differs from other forms of dining out such as inns or taverns and while there have always been take-out establishments and food vendors in cities, a restaurant is a place to sit down to a meal. It offers more choice than places with set meals or locales that essentially are for drinking. Delmonico’s advertised itself as a French restaurant and for more than 150 years, high-end cuisine was defined as French, a trend that faded only in recent decades.

From the start, women in the company of male escorts were welcome at Delmonico’s and other elegant restaurants. Lunch tended to be reserved for professional and business men who either found it inconvenient to return home or wanted to meet friends and contacts. Evening meals were more festive and provided a chance for couples to show off. What about women who wanted to have a restaurant meal alone or with a group of other women? Or women traveling alone? Before the Civil War, a space called a “Ladies Ordinary” was set aside for women in hotels. This, it was often stated, was to protect “respectable” women from being accosted or harassed by men or, even worse, taken for easily available women by male travelers, loungers, and dubious characters.

This was not very satisfactory as it really had the effect of making the “Gentlemen’s Ordinary” all-male while couples dined in the women’s restaurant. Beginning not long before the Civil War, restaurants started to cater to female shoppers who wanted lunch. Establishments called “Ice Cream Saloons” opened up near dry-goods emporia and the first department stores. They offered ice-cream, which was thought to appeal to women, as well as light meals. A key element of their efforts to attract women was that they did not serve alcohol.

As women worked in increasing numbers in offices and retail establishments, inexpensive restaurants offering lunch in respectable but not over-fussy settings proliferated. These were less pretentious than the ice-cream saloons, but here too, female taste was thought to be attracted on the one hand to light food such as sandwiches or salads, but also to elaborate desserts, especially ice-cream. This is a persistent idea — that women combine abstemiousness with indulgence — whose beginnings are clear in the nineteenth century. By 1900, coffee shops, tea-rooms, department store restaurants, and chain restaurants such as Schrafft’s (which also sold ice cream and confectionary) and Child’s had a predominantly female clientele. Men might lunch at bars that offered “free lunch” with the purchase of drinks, at clubs or at fancy restaurants ranging from steakhouses to French locales.

In the late-nineteenth and early-twentieth centuries women still had difficulty being served at fine restaurants if they arrived without men accompanying them. Delmonico’s offered a private dining room to the women of the Sorosis Club for their luncheon meetings, but would not let women in groups have tables in the main dining room. In 1900, Rebecca Israel was denied service for dinner at the Café Boulevard on New York’s Second Avenue and made a public issue of it. In 1907, two social activists, Harriet Stanton Blatch and Hettie Wright Graham, were barred from the roof-garden restaurant of the Hoffman House. The restaurant claimed to be defending respectable women from dining in proximity to non-respectable women. The manager plaintively observed that the women had been offered a table in the ladies’ dining room. The women sued and lost, but they had effectively made their point. In response to the notion that she was being protected from objectionable women, Mrs. Blatch observed that she had never, in fact, been bothered by such women: “When I have been annoyed it has been by men. I do not suppose you make any effort to keep objectionable men out.” Her campaign coincided with efforts by suffragists who demanded not only the right to vote, but that women be considered full public actors in public spaces.

Restaurants’ justifications for their policies of discrimination were contradictory. On the one hand, the Hoffman House defense implied that unescorted women of dubious character were lurking on the premises, and that respectable ladies needed to be isolated from them. Elsewhere, however, women unaccompanied by men might be seated if they were deemed to be “ladies,” thus the dining room was reserved for respectable women. Rather than banning unexceptionable ladies so as to avoid proximity to socially compromised women (lest the former feel “uncomfortable”), restaurants would admit only women of impeccable credentials. Of course, even within its own dubious terms this policy presented difficulties. When pressed by reporters, in the aftermath of the Hoffman House incident, to define “ladies” the managers of the Waldorf, Delmonico’s, and other fine restaurants could come up only with tautological formulations — a lady was a woman who looked and carried herself like a lady.

By the 1920s, most restaurants gave up the idea that they were protecting morals. There were restaurants that didn’t admit women under any circumstances, and some of these (such as the Oak Room at the Plaza or Mory’s in New Haven) would become objects of demonstrations in the 1970s until they capitulated. But after the First World War, the opening so many different kinds of middle-class restaurants (such as Chinese and Italian places) and the advent of Prohibition changed the restaurant scene completely. Male office workers now had the same soup and sandwiches or chop suey as women. What lasted much longer than sexual segregation (and still is in flux) is how male and female tastes in food were differentiated and stereotyped.

Paul Freedman is a Professor of History at Yale University, specializing in areas of medieval social history and the history of cuisine. He discusses the topic of this blog further in his article, “Women and Restaurants in the Nineteenth-Century United States” in the Journal of Social History.