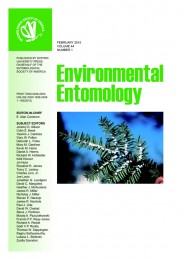 Environmental Entomology is published bimonthly in February, April, June, August, October, and December. The journal publishes reports on the interaction of insects with the biological, chemical, and physical aspects of their environment.

What’s your first reaction when you see this picture? Love? Fear? Repulsion? If you are like many Americans, when you come across a spider, especially a large, hairy one like this tarantula, the emotions you experience are most likely in the realm of fear or disgust. Your actions probably include screaming, trapping, swatting, or squashing of the spider.

Despite their negative reputation, spiders are essential members of the global ecosystem. They are present in all terrestrial habitats, except Antarctica, and thrive wherever insect prey and vegetation are present, including freshwater ponds, caves, agricultural crops, and to elevations over 20,000 feet ¬- over 40,000 spider species worldwide. The thing that many people fear about spiders – the predatory instinct – is exactly what makes spiders beneficial. They feed on a variety of insect and invertebrate prey that humans consider pests.

Spiders are beneficial to humans beyond their role in controlling pests. The silk and venom of spiders has commercial appeal. Due to the strength and elasticity of spider silk, it is being considered for mass production for gloves, bullet-proof vests, parachutes, and cables. A peptide from tarantula venom was found that inhibits atrial fibrillation in rabbit hearts, which may be beneficial for the prevention of arrhythmia in humans.

The more we understand these eight-legged creatures, the less we will fear them. With only a few species considered harmful to humans and their tendency to avoid human encounters and bites, their negative reputation is unjustified.

In honor of “Save a Spider Day” take a look at these fascinating species and marvel at the unique biology and adaptations of the arachnid world.

Unfortunately, spiders often take the blame for any sort of lesion or bite that appears on someone’s body, when, in fact, most of the smaller spiders that are commonly encountered can’t even pierce human skin with their fangs. In the midst of spider hysteria, it’s important to remember that almost all spider bites involving humans are nonthreatening. A spider bite and its associated symptoms are often based solely on anecdotal evidence without a spider being captured or professionally identified. Sometimes a specific species, like the brown recluse, Loxosceles reclusa, is accused of biting someone in a location that is not even part of its native range. Many times the victims of “spider bites” do not witness the bite and sometimes they never saw a spider at all! For years, spider bites have been chronically over diagnosed. These misdiagnoses could, in actuality, be infections (bacterial, fungal, or viral), allergic reactions, other arthropod bites, or many other serious medically-related conditions.

Laurie Kerzicnik is an Insect Diagnostician and Assistant IPM Specialist at Montana State University Extension in Bozeman, Montana. She has worked with spiders and biological control for over 16 years. Her education and outreach focuses on diminishing fears and misinformation about spiders and the benefits of spiders and other natural enemies in urban and agricultural environments. She is the co-author of “Spider Fauna of Semiarid Eastern Colorado Agroecosystems: Diversity, Abundance, and Effects of Crop Intensification,” published in Environmental Entomology.