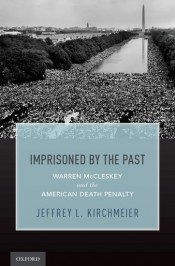 Imprisoned by the Past: Warren McCleskey and the American Death Penalty

In February, the Equal Justice Initiative (EJI) in Montgomery Alabama released a report, Lynching in America: Confronting the Legacy of Racial Terror. In researching for the report, EJI examined the practice of lynching in twelve southern states between Reconstruction and 1950. The report’s conclusions and recommendations provide important lessons about the past, present, and future of society.

Among the findings, EJI counted 700 more lynchings than had previously been reported for a total of 3959 racial terror lynchings of African Americans between 1877 and 1950 in Alabama, Arkansas, Florida, Georgia, Kentucky, Louisiana, Mississippi, North Carolina, South Carolina, Tennessee, Texas, and Virginia. Many of the victims of terror lynchings were killed for small social transgressions or for demanding basic rights, as perpetrators often used lynching to try to control African-American communities through fear.

The revelations in the report do more than document the past; they critique our modern failures. For example, the report notes that many southern communities have erected monuments to memorialize the Civil War and the Confederacy, while at the same time “[t]here are very few monuments or memorials that address the history and legacy of lynching in particular or the struggle for racial equality more generally.” Thus, EJI and its Executive Director Bryan Stevenson are striving to raise funds to erect memorials and markers at the sites of past lynchings.

To understand the modern significance of the report, one need only look to the deaths of Trayvon Martin in February 2012 in Sanford, Florida, of Eric Garner in July 2014 in Staten Island, New York, and of Michael Brown in August 2014 in Ferguson, Missouri. The movements around those killings mourned the men and also implored society to understand the past’s role in the acts of the present. We only can begin to comprehend these and other tragedies by remembering the racial past that laid the foundation for today’s United States.

Lynchings’ legacy remains connected to our modern legal system in many ways. As lynchings declined in the early 1900s and criminal laws that overtly discriminated against African-Americans were gradually changed, racial prejudice continued to infect the legal system.

The practice of using violence to enforce racial oppression became more reliant on using the legal system as a means of racial oppression, including through the use of capital punishment and discriminatory jury selection systems. Thus, by the 1930s as lynchings became limited to a few per year, within the court system two-thirds of all executions were of black defendants. Even though most northern states had eliminated the spectacle of public executions by the middle of the nineteenth century, some southern states retained public hangings in an obvious nod to the practice of lynching. For example, Kentucky had abolished public executions as early as 1880 but brought back public hanging forty years later as an option for rape and attempted rape crimes. Further, just as the EJI’s research revealed that lynchings often were concentrated in certain counties, the death penalty is similarly used at a higher rate in the South and in only a small percentage of counties in the country.

Today, US courts have failed too often to acknowledge the history of racial violence. In 1987, the Supreme Court considered the case of Warren McCleskey — a black man who had been sentenced to death for killing a white police officer. McCleskey’s lawyers presented the courts with statistical evidence that race still infected the death sentencing process. In particular, a defendant who was charged with killing a white person was around twice as likely to be sentenced to death as someone who killed an African-American. The US Supreme Court in a 5-4 decision in McCleskey v. Kemp assumed that the statistical findings of racial bias were correct, but it held that McCleskey’s death sentence did not violate the Eighth Amendment or the Fourteenth Amendment of the US Constitution.

Justice Lewis Powell, who wrote the McCleskey majority opinion and who would later regret his decision in the case, believed that the racial discrimination of 1987 significantly differed from the discrimination and the racial violence of the past. While 1980s America did not look like 1880s America, they were still connected. Warren McCleskey himself would have recognized that connection, as he grew up in a town where blacks could not go to school with whites and in a state with a flag that incorporated the Confederate battle flag.

Only thirty years before Warren McCleskey was born, one of the most famous lynchings in US history occurred in his hometown of Marietta, Georgia when people from that town lynched Leo Frank, a possibly innocent man lynched largely because he was Jewish. In 2008, more than 90 years after the lynching, the Georgia Historical Society along with several organizations erected an historical marker at the location where Frank was killed. Having visited the site of the lynching, I recognized how a modern-day marker, even in the midst of fast food restaurants on a busy street, could make one pause and reflect.

As the Equal Justice Initiative and others continue to work to memorialize other lynchings around the country, these monuments will not only help us remember those who died but also help us understand today’s society. Billie Holiday recognized this point when she performed the powerful anti-lynching song “Strange Fruit,” as did Woody Guthrie when he wrote the lesser-known song “Don’t Kill My Baby and My Son,” about an Oklahoma lynching witnessed by his father.

The ongoing work of activists to erect memorials at lynching locales is about who we are as much as it is about who we were. Just as it is important to remember the battlefields of war, we also need monuments to remember the battles for racial justice. As William Shakespeare wrote in The Tempest and as slightly altered in stone next to the entrance of the National Archives Building in Washington, D.C., “What is Past is Prologue.” We need memorials dedicated to the prologue of racial violence in order to effectively address our present and our future.

Jeffrey L. Kirchmeier, Professor of Law at City University of New York School of Law, is the author of the new book Imprisoned by the Past: Warren McCleskey and the American Death Penalty (Oxford University Press).