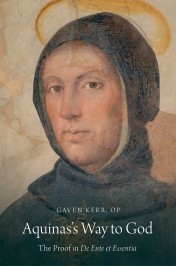 One of the benefits of contemporary atheism is that it has brought to the forefront of modern consciousness the demand that believers offer some reason for the belief that they have. Of course, this demand is nothing new, and it even has scriptural support behind it, with St. Peter insisting that Christians ought always be prepared to give a reason for their hope (1 Peter 3:15). Accordingly, the Christian tradition has always cherished and promoted the cultivation of wisdom so that Christianity may be a reasonable belief to hold. Contemporary atheism has brought to the fore the same demand that belief should be reasonable, and so contemporary Christians ought to show that their belief is indeed so.

St. Thomas Aquinas is a man whose name is practically synonymous with the endeavour to show that the religious belief he adopts is a reasonable one to hold. While he is not the only person to whom we can turn in the history of Christian thinkers to meet the demand of the reasonableness of faith, he is certainly a major figure. One of Aquinas’s more well-known journeys into philosophical thinking is in the realm of arguments for the existence of God. His famous five ways from the Summa Theologiae have been anthologised and commented on almost ad nauseam. The five ways represent the thought of Aquinas at the height of his philosophical powers, making use of a lifetime’s research into the different philosophical issues that are at work therein. However, given such a focus, it is common for many non-specialists to believe that the five ways are Thomas’s only proofs for the existence of God, or that they are the only ones worth considering. Not only that, given that they are a reflection of a mature mind making use of philosophical principles developed elsewhere, the five ways can come across as quite dense, with undefended premises, and are thereby often thought to be subject to easy refutation. This is inevitable when assessing the mature work of any important thinker, since that work will always make use of key themes developed elsewhere in his philosophy.

In my work I’ve offered an interpretation and defence of the proof of God from the De Ente et Essentia; for the latter proof is developed in quite an early work and emerges within the context of Thomas’s articulation of the metaphysical nature of reality. Hence the proof in De Ente is relatively easy to follow for the non-specialist. It centers upon Thomas’s characteristic notion of esse – a term that has no ready translation into English and is often translated as “existence” or “act of existence.” What is at the heart of Thomas’s notion of esse is that it is the principle by which something is something rather than nothing, i.e. it is that by which a thing exists. Esse is distinct from the essences of all things of a nature capable of being multiplied. Given that essence and esse are really distinct in things, Thomas reasons that esse is caused in such things. Now if esse is caused in such things the question is, what is the nature of the cause of esse? Is it another thing in which essence and esse are distinct or is it something in which they are not so distinct? If the former then what is the cause of the esse of that? And if the latter, then we have arrived at something that is simply esse, i.e. something whose essence is simply to be. So Thomas sets up a causal regress in the line of esse, and the goal of the proof is to establish that there is something that is simply esse itself, whose essence is to be.

In order to achieve his goal, Thomas must establish that the causal regress in the line of esse terminates in a primary cause whose essence is its esse; and so we enter upon the whole discussion of whether or not there can be an infinite regress. Surprisingly, Thomas is not a thinker who simply thinks an infinite regress impossible; rather, Thomas holds that we need to consider the nature of the causal series in question, and then consider whether or not it can be infinite. Thomas distinguishes between two types of causal series: per accidens and per se. He argues that the former is potentially infinite whereas the latter is necessarily finite. His reasons for concluding to the latter are complex, but they center upon the fact that in a per se series, the causality of the series is not possessed by any of the posterior causal relata, whereas in the per accidens series it is. So in the example of a per se series where a mind moves the hand to move a stick to move the stone, the causality of the hand, stick, and stone, i.e. the motion, is not possessed intrinsically by any of them, but is so by the mind. Hence, the mind is the primary cause in that series. On the other hand, in the per accidens series of a father producing a son who produces a son and so on, each member has the causality of the series in himself, i.e. the ability to beget a son.

When it comes to the causal series in which esse figures, Thomas locates that in a per se framework since esse as a causal property is not possessed by any essence/esse composite essentially. Thus, the causal series in which esse figures is a per se series, and has a primary cause, otherwise the causality of the series, i.e. esse, would have no cause, in which case nothing in the series would exist.

Gaven Kerr is a husband and father of two, and a lay member of the Order of Preachers (the Dominicans). His work has always been on philosophy generally, notably metaphysics and epistemology, and he specializes in the thought of St. Thomas Aquinas and the general medieval background to his thought. The main goal of his work is to establish the contemporary significance of Aquinas. He is the author of Aquinas's Way to God: The Proof in De Ente et Essentia.