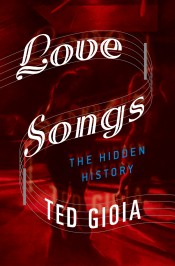 A recent study of commercial recordings finds that 90% are attributed to men—and most often men in their peak years of sexual activity. Perhaps this discrepancy is the result of bias in the music industry or among audiences, or maybe a little of both. Or perhaps we can conclude that Darwin was right about music. He believed that songs originated as a tool for courtship, not much different from the vocalizing of male birds during mating season. From this perspective, all songs are love songs, and men take the lead in this process as part of their biological mandate.

Yet close study of the cultural evolution of romantic music reveals that women contributed most of the key innovations in the love song. Even when men took most of the credit—which often happened—they frequently constructed their songs by imitating the earlier works of female singers. To some extent, the history of the love song can be described as the process of men learning to sing as if they were women.

In many times and places, this gender shift has led to criticism, and sometimes prohibition. Quintilian, complaining about the music of the early Roman Imperial era, griped that songs had been “emasculated by the lascivious melodies of our effeminate stage.” These have “no doubt destroyed such manly vigor as we still possess.” Did effeminate love songs lead perhaps to the fall of Rome? I doubt it, but many leaders of antiquity bemoaned these melodies. Seneca the Elder warned that “the revolting pursuits of singing and dancing have these effeminates in their power; braiding their hair and thinning their voices to a feminine lilt….This is the model our young men have!”

A similar backlash can be traced, even earlier, to ancient Greece. Here the lyric tradition created by a famous woman, Sappho, was inherited by men. They took bold steps to make the lyric a more manly and sober affair. Pindar, lauded by Quintilian as the greatest of the lyric poets, used his art to sing the praises of worthy men. But even here, the gender shift was inescapable—the lyric was, in its essence, all too clearly marked by Sappho’s legacy. Pindar was forced to admit, in a revealing confession: “I must think maidenly thoughts. And utter them with my tongue.”

This aspect of the lyric helps us understand other apparent anomalies. A papyrus discovered in an Egyptian tomb in 1855 contains previously unknown verses of a partheneion, or maiden song, from the earliest days of Greek lyric. But—strange to say—the composer of the song is a man, the poet Alcman. He is the earliest of the great male lyric poets of ancient Greece, but his surviving work is clearly composed for young women to sing. Like Pindar, Alcman served as spokesman for maidenly thoughts.

Half a world away, Confucius is credited as the esteemed authority who gathered the most famous ancient Chinese love songs into the collection known as the Shijing or Book of Songs. Many of the songs in this collection adopt a female narrative voice. How odd that Confucius, operating at almost the same time as Pindar, would also be linked with “maidenly thoughts.” Later Confucian scholars exerted a great deal of effort toward explaining away this apparent paradox. They hoped to prove that these songs weren’t really about women’s romantic yearnings—and some still aim to prove this. But few modern readers will be convinced by these attempts to remove the romance from these heartfelt love lyrics.

Yet the most famous attempt to do just this comes from the Judeo-Christian tradition. The Biblical Song of Songs, the most famous love lyric in history, is attributed to King Solomon, but many of the sentiments expressed in the scriptural text are clearly from a female perspective. Scholars still argue over explanations for this anomaly. How did all this eroticism get into the Bible? But they rarely note (and are probably unaware of) how frequently famous men in other cultures also take credit for the love songs of women. Perhaps from a theological perspective, this state of affairs appears peculiar, but viewed in the context of the history of the love song, it is a familiar pattern, repeated again and again over the centuries.

In almost every instance, the names of the female innovators have not survived. They are the first undocumented workers in music history. Yet their contributions can still be traced and, more to the point, heard even today in the love songs that we use in courtship and seduction, or merely personal fantasy and idle entertainment.

The story of the female innovators behind the troubadours of southern France may be the most fascinating chapter in this mostly unwritten history. Scholars remember the names of the famous troubadours who are given credit for inventing key elements of the Western love song, but neglect to tell us of their predecessors, the elite female singing slaves of the Muslim world. These women, known as qayna, anticipated almost every key element in the ethos of courtly love long before the troubadours arrived on the scene. Indeed, the most distinctive element of troubadour song—namely, the singer’s posture of servitude and bondage to the beloved—was adopted by these women because they were in a state of actual servitude.

Many other medieval love lyrics have puzzled scholars, who have tried to explain why men are adopting a woman’s perspective. We find this with the chansons de toile, the spinning songs of the French trouvères. We encounter this with the Old English love lyrics from the Exeter Manuscript, “The Wife’s Lament” and “Wulf and Eadwacer.” And we find this in the Islamic world as well, where a host of effeminate singers, the so-called mukhannathun, enjoyed enormous popularity.

The surviving documents are filled with many puzzles, but they make clear that audiences responded enthusiastically to men who performed music as if they were women. One commentator ranked the eighth century performer Ibn Surayj as the best of the female singers. But he was clearly a man. The context makes it impossible to know whether this critic is making a joke, offering a musical judgment on Ibn Surayj’s performances, or merely referring to the singer’s way of life. In a similar vein, the celebrated master of Abbasid love lyrics Abbas Ibn al-Ahnaf, another man who composed ghazals performed in the caliph’s court, is described as “delicate, attractive, tender and full of ideas”—and here the qualities emphasized are clearly personal ones. We are left with an almost inescapable conclusion, that both performers and audiences saw a link between feminine qualities and skill as a purveyor of musical entertainment, especially love songs.

How did patrons and audiences react to this “effeminate” manner of singing? The story is told of a noble singer of the old style who was chastised by his son for changing his approach in his old age, and adopting the popular vocal style of the mukhannathun. He replied: “Be quiet, ignorant boy!” and pointed out that he had lived in poverty for sixty years singing in the old style, but now had “made more money than you’d ever seen before” by adapting to the new manner of performing.

This aspect of the love song continues in the current day. The gender complexities of The Rocky Horror Picture Show and Ziggy Stardust may have seemed radical to 20th century audiences, but the epicene stars of modern times were simply repeating a formula as old as the love song itself. Perhaps most of the recording royalties generated by our favorite love songs have gone to men, but at every step in the evolution of this music, the influence of women—whose names are rarely preserved—provided the foundation for their successes. It is high time that we revised our historical accounts of this music to acknowledge their contributions.

Ted Gioia is a music historian and the author of nine books, including The History of Jazz and Delta Blues, both selected as notable books of the year in The New York Times. Love Songs continues his pioneering research into the music of everyday life, previously featured in Work Songs and Healing Songs, both winners of the ASCAP Deems Taylor Award. Follow him @TedGioia.