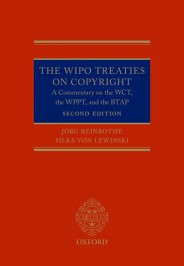 The WIPO Treaties on Copyright

Copyright these days is very high up on the agenda of politicians and the public at large. Some see copyright as a stumbling stone for the development of digital services and think it is outdated. They want to make consumers believe that copyright protection is to be blamed, when music or other ‘content’ is not available online, preferably for free.

From Brussels we hear that ‘national copyright silos’ should be broken up, that the EU Internal Market is fragmented when it comes to copyright – in short, an urgent need for copyright reform is claimed.

All this has put copyright in a defensive corner. But one cannot help the feeling that we may be talking cross purposes. Because, while all this heated debate is going on and gaining speed and intensity, there is a subtle and useful framework of copyright protection in place for more than 100 years, which has regularly been updated by lawmakers, not only by EU Member States and the EU, but literally from all over the world.

And as legitimate and pertinent the on-going discussions may be, they all cannot deny, but rather have to take account of, the international framework for copyright protection that is in place and is pretty much up to date.

How did this modern international framework come about?

Well, what happened at international level went almost unnoticed by the general public, including the many efforts that were needed to over the years to stabling this international copyright framework which agreed the balance of rights and interests across the world.

I am proud to have contributed to this framework in various capacities and on various occasions. In the beginning of my career, I attended meetings at the Council of Europe and the World Intellectual Property Organization (WIPO), where the international copyright community discussed how to adapt copyright protection for new technologies, new market structures, and changing consumer behavior.

In the late 1980s, I joined the negotiations on the project of an international agreement on trade-related intellectual property rights (TRIPs) within the framework of the GATT/Uruguay round. The resulting World Trade Organization/TRIPs agreement was, in many respects, a true breakthrough for international law-making on copyright and industrial property alike, including its enforcement.

“While all this heated debate is going on and gaining speed and intensity, there is a subtle and useful framework of copyright protection in place for more than 100 years, which has regularly been updated by lawmakers, not only by EU Member States and the EU, but literally from all over the world.”

Then, in the 1990s, the focus of international copyright shifted towards what was called the ‘digital agenda’. This happened at a time when personal computers in the household became a huge success story, while new digital services like video-on-demand were gaining ground, and the internet grew above its infancy.

During that time, we prepared and negotiated what  came to be known as the WIPO Internet Treaties – the two WIPO treaties of 1996 on copyright, the WCT (WIPO Copyright Treaty), and the WPPT (WIPO Performances and Phonograms Treaty).

What was so significant about these treaties?

Firstly, the fact that they were adopted at the Diplomatic Conference of December 1996 by a vast majority of the more than 150 participating countries from around the world makes them extremely significant. With this in mind, one could almost speak of an international consensus on copyright protection in the digital age.

Secondly, to say that these treaties added value is but a pale understatement. No, it was much more than that: the WCT and the WPPT included several innovative steps to update the balance of rights and interests on the substance of copyright protection. The firm establishment of the ‘three-steps test’ as an international standard for measuring and evaluating exceptions to and limitations of copyright; the introduction of the ‘making available’ right was particularly relevant for the marketing of new interactive services; and the protection of technical protection measures and rights management information paved the way for the management of copyright-related services on the internet.

At the time, I perceived it as a privilege and an important responsibility to be the Head of the EU Delegation at the Diplomatic Conference of 1996 where the treaties were adopted. And after the Diplomatic Conference, I thought it would be a mistake to not share this experience and all of the insights of our team with the outside world. Hence, the idea of writing a book about the two Treaties was born. Together with Silke von Lewinski, who was one of the main EU experts in my team, I published the book The WIPO Treaties 1996 in 2002.

In various capacities, Silke and I have been actively involved in these developments. Therefore, we felt the time was right to publish a second edition of the book that includes a commentary on the BTAP, reference to jurisprudence, national and regional legislation and literature, as well as developments in international copyright law with relation to the WIPO Treaties. With digital copyright issues being on top of the agenda of many legislators right now, having full and updated insights into international copyright rules is more crucial than ever.