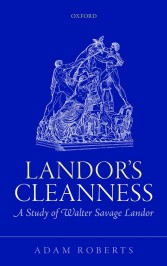 Landor's Cleanness is the first comprehensive study of Walter Savage Landor's writing for nearly half a century. It addresses the whole of Landor's prodigious output over the seven decades of his writing life offering 'cleanness' as the organising principle by which this body of work should be read.

Though he’s largely forgotten today, Walter Savage Landor was one of the major authors of his time—of both his times, in fact, for he was long-lived enough to produce major writing during both the Romantic and the Victorian eras. He kept writing and publishing promiscuously through his long life (he died in his ninetieth year) which puts him in a unique category. Maybe the problem is that he outlived his own reputation. Byron, Shelly and Keats all died in their twenties, and this fact somehow seals-in their importance as poets. Landor’s close friend Southey died at the beginning of the 1840s. Landor lived on, writing and publishing poetry, prose, drama, English and Latin. He forged friendships now with men like Robert Browning—who was deeply influenced by Landor’s writing—John Forster and Charles Dickens (Dickens named his second son Walter Savage Landor Dickens in his friend’s honour). His Victorian reputation was higher than his sales; but and if we’re puzzled by how completely his literary reputation was eclipsed during the 20th century in part that may simply be a function of his prolixity. Landor’s Collected Works was published between 1927 and 1936 in sixteen fat volumes; and even that capacious edition doesn’t by any means contain everything Landor published. It omits, for instance, his voluminous Latin writing—for Landor was the last English writer to produce a substantial body of work in that dead language. In late life he once said ‘I am sometimes at a loss for an English word; for a Latin—never!’

His most substantial prose writings were the Imaginary Conversations: dozens and dozens of prose dialogues between famous historical figures, and occasionally between fictionalised versions of living individuals, varying in length from a few pages each to seventy or eighty. The prose is exquisite, balanced, beautifully mannered and expressed and full of potent epigrams and apothegms on art, society, history, morals and religion. Nobody reads the Imaginary Conversations any more. Then there are the epics—his masterpiece, Gebir (1798), an heroic poem of immense ambition, was greeted by bafflement and ridicule on its initial publication. Landor’s experimental epic idiom was simply too obscure for his readers even to understand—though Lamb claimed the poem has ‘lucid interludes’, and Shelley loved it. Critic William Gifford was less kind: he called the poem ‘a jumble of incomprehensible trash; the effusion of a mad and muddy brain.’ Landor decided to address the question of the poem’s obscurity the best way he knew: by translating the entire epic into Latin (Gebirus, 1803). Ah, those were the days!

He wrote shoals of beautiful lyrics and elegies. He wrote volumes-full of plays, all cod-Shakespearian blank-verse dramas. He wrote historical novels, one of which (Pericles and Aspasia, 1836) is very good. He wrote classical idylls, pastoral poetry—he was a passionate gardener—epigrams and epitaphs in English and Latin. The sheer amount of work he produced may explain the decline in his reputation; for looking new readers surveying the cliff-face of text to climb may find it offputting.

It’s worth the ascent, though. Landor was a choleric individual, given to sudden rages, whilst also magnanimous, kind-hearted and loyal to his friends. Dickens wrote him into Bleak House as the character Boythorn; and a Boythorn-ish energy and vitality very often breaks through the classical refinement of the verse. Unhappily married (he and his wife separated in 1835) he lived through a series of towering, unrequired passions for other, married women. This hopelessness, paradoxically, gives force to some of the best poetry Landor ever wrote: love poems in which the impossibility of love only magnifies the intensity of affection. It’s idea Landor understands better almost than any other writer: that the strongest feelings are predicated upon absence rather than presence. Here’s his short lyric ‘Dirce’ (1831):

Stand close around, ye Stygian set,
With Dirce in one boat convey’d,
Or Charon, seeing, may forget
That he is old, and she a shade.

This says that Dirce is so beautiful that, were he to see her, Charon might ‘forget himself’, and presumably ignore the obstacles of his own dotage and the fact that she is ‘a shade’ to make erotic advances. But in fact the ‘forgetting’ in this lyric involves a much more complex mode of amnesia. It’s tempting to read the poem as being about a particular affect: the melancholy, hopeless desire of an old man for the ideal of youthful female beauty. Desire haunted by the sense that, really, it would be better not to feel desire at all—that to desire is in some sense to ‘forget yourself.’ That idiom is an interesting one, actually; as if an old man feeling sexual desire is in some sense ‘forgetting’ not just that he is old, and that young girls aren’t interested in clapped-out old codgers, but more crucially forgetting that he isn’t the sort of person who feels in that way at all. Perhaps we tend to think of desire not as something to be remembered or forgotten, but as something experienced directly. In its compact way this poem suggests otherwise.

Renunciation is another of Landor’s perennial themes. One of his most famous quatrains runs:

I strove with none, for none was worth my strife;
Nature I loved; and next to Nature, Art.
I warmed both hands before the fire of life;
It sinks, and I am ready to depart.

Written in 1849, on the occasion of Landor’s 74th birthday, this has a certain clean dignity, both stylistically and in terms of what it is saying; although it takes part of its force from the knowledge that (as I mention above) Landor actually strove with people all the time, all through his life: personally, cholerically, in law courts, in print and face-to-face. The second line of the poem, by (it seems to me) rather pointedly omitting ‘people’ from the things that Landor has spent his life loving, rather reinforces this notion. One consequence of a man, particularly a large man like Landor, standing in front of the fire to warm his hands is to block off the heat from everybody else in the room. And that seems appropriate too, somehow.