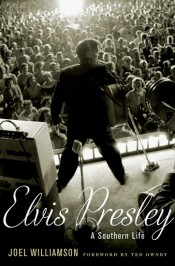 Today, 8 January, is the 80th birthday of Elvis Presley. Born to Vernon Elvis Presley and Gladys Love Presley (née Smith) in 1935, the ‘King of Rock and Roll’ left an indelible mark on American popular culture. In celebration, we present a brief extract from Elvis Presley: A Southern Life by Joel Williamson.

One photograph of the small Presley family captures the essence of their lives then and thereafter. Elvis, about three years old, is posed with Gladys and Vernon. Elvis is standing, and his parents are sitting on either side of him.

The exact date of the picture is unknown. Decades later it showed up in the photograph collection of the Official Elvis Presley Fan Club in Leicester, England. Interviews with pediatricians, pediatric nurses, mothers, fathers, grandmothers, and grandfathers have estimated Elvis’s age.

The blank, clean, slightly gray background is probably the concrete wall of the brand-new Lee County jail in Tupelo. Vernon is a prisoner, having been arrested on November 16, 1937, for forging a check. The county jail had recently been built by the Works Progress Administration (WPA), a New Deal project to employ the unemployed. Previously, county prisoners had been lodged in the run-down town jail. Only the white prisoners were moved to the new jail.

In the photograph, mother, child, and father are close, body to body as if huddled against a coming moment of separation. Gladys’s left arm reaches behind and across Elvis’s back to Vernon. Her open hand rests lightly on Vernon’s left shoulder, as if to hold him in gently, to affirm her presence with him. It is a hand that seeks to comfort, but its loose openness signals her powerlessness.

Vernon had been charged with forging a check on Orville Bean, the dairy farmer who was his landlord and employer. He had been arrested and arraigned during the fall term of criminal court. He pled not guilty, but he would not get a speedy trial. His plea came too late for him to be tried in the fall term of court. His case would have to wait for the spring term, which began six months later on Monday, May 23, 1938. Before the court convened that spring, the local papers were full of suggestions that the docket was overfull and that justice in Lee County must be meted out more rapidly than before.

Only days before Vernon’s case would have been tried, he changed his plea to guilty. Justice swiftly followed. On Wednesday, May 25, Judge Thomas H. Johnston sentenced Vernon to three years in the state penitentiary. He got no credit for the six months he had spent in the county jail. After sentencing came the anxious wait before the prison guards trucked him off to Parchman Farm.

On Saturday, May 28, Circuit Court Clerk Joe J. Kilgo wrote out the papers committing Vernon and eleven other convicts to Parchman. The twelve men waited in the county jail for the dreaded arrival of “Long Chain Charley,” a sergeant on the guard force at Parchman who circulated through the state collecting convicts for transport to prison. He always brought a long chain to which he shackled his prisoners to prevent their escape.

Six months in the county jail waiting for a trial had been bad enough, but there was always at least some hope for relief. Orville Bean might decide not to press charges against Vernon. Relatives and friends might somehow intervene. If it came to a trial, a good lawyer might rise to defend him and the jury might find him innocent. Having changed his plea to guilty, Vernon faced the certainty of serving at hard labor in a notoriously tough prison for three long years, years in which he could not come home every night to his wife and child in their little two-room wooden house in East Tupelo nor earn money to support them.

Sensing the pathos in the photograph does not require knowledge of its history. The bodies of the man and woman are tense with anxiety and dread. The child is anxious and confused. Vernon has put his hat on his head as if making ready to leave. He faces the camera, but his eyes cut to his left as if watching fearfully for someone or something to appear that he already hears. Gladys also stares to the left, her body stiff.

The little boy’s gaze is less focused, as if he were told to look at the camera but senses something he needs to see off to the left too. He wears bib overalls over a dark, long-sleeved shirt, charmingly trimmed with white cuffs and a white collar. Gladys is a talented seamstress. She wears a flower-print dress. Her dress, like Elvis’s shirt, is attractively set off by a collar of a different color. Elvis, like his father, wears a hat. His hat seems almost man-sized, cocked at a rakish angle on his round little head. His full cherubic lips are twisted down to the right as if he realizes that he should say something and set his jaw in some certain way to assert an attitude, but he doesn’t know what to say or how.

This is the earliest photograph of Elvis. The photographer was most likely a friend or a relative who had driven Gladys and Elvis a couple of miles over from their home in East Tupelo. It was a defining moment in the lives of Elvis, Gladys, and Vernon Presley, individually and collectively. The very fact of the visit, the camera, and the one photograph that has been preserved indicates that they understood that they were at a critical juncture in their lives. The petty and foolish crime that Vernon committed in the fall of 1937, when he was twenty-one, Gladys twenty-five, and Elvis less than three, deeply marked their lives.

Joel Williamson, Lineberger Professor Emeritus of the Humanities at the University of North Carolina at Chapel Hill, is the author, most recently, of Elvis Presley: A Southern Life. He is the author of a number of landmark works on Southern culture, including William Faulkner and Southern History (OUP, 1993) and The Crucible of Race: Black-White Relations in the American South since Emancipation (OUP, 1984), which won the Francis Parkman Prize, the Robert F. Kennedy Book Award, and the Ralph Emerson Award. Both books were finalists for the Pulitzer Prize.