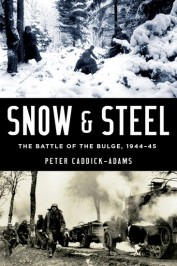 Each year on 16 December, in the little Belgian town of Bastogne, a celebrity arrives to throw bags of nuts at the townsfolk. This year, it will be Belgium’s King Philippe and Queen Mathilde who observe the tradition. It dates from Christmas 1944, when attacking Germans overwhelmed and surrounded the small town and demanded that the US forces defending Bastogne to surrender. The American commander, General Anthony McAuliffe, searching for a word to vent his frustration and defiance, simply answered: ‘Nuts!’

The day marked the beginning of the Battle of the Bulge. Fought over the winter of 1944-5, it was Hitler’s last desperate attempt to snatch victory over the Allied armies who had been steamrollering their way into the Reich following the invasion of Europe the previous June. The commemorations this year have an added poignancy as hardly any of the veterans who fought in the campaign are left alive. The local Belgians remain grateful to their wartime liberators. Some have begun another tradition, dressing in wartime GI uniforms, as a mark of respect and remembrance.

It is a battle worthy or remembrance. The Wehrmacht’s attack—aided by Allied intelligence lapses and the Nazi’s ruthless secrecy–fell on a thin line of GIs defending the Belgium-Luxemburg border. It came as a shock and a complete surprise. Fielding their last panzers and thousands of new units, the Germans created complete mayhem for a few days. It seemed as if they might break through, as US Army units reeled. The savagery of the battle was horrific. In some sectors, there was hand-to-hand combat in sub-zero cold, and thousands of Americans were taken prisoner. In thick fog and snow at Malmedy, another small Belgian town, some American prisoners were massacred by fanatical SS troopers.

The German plan had been based on speed and surprise, and success was to be measured in days and even hours. But when faced with the resistance of American soldiers throughout the Ardennes regions of Luxembourg, including at Bastogne and St. Vith, the Wehrmacht’s advance slowed, then stopped. The Germans soon ran low on fuel, food, and ammunition, After battling for over forty days, and in the face of overwhelming US counter-attacks, Hitler’s armies were forced back to where they had started.

Winston Churchill hailed the end result as ‘an ever-famous American victory’. But it came at a high cost: at the end of the offensive, 89,000 American soldiers were casualties, including 19,000 dead. The Germans lost more. Some British units also took part, losing 1,400, and 3,000 Belgian civilians were killed, caught by shellfire in their own homes.

The Battle of the Ardennes, as it was called at the time, was America’s greatest—and bloodiest—battle of World War II, and indeed the bloodiest in its history. Some 32 divisions fought in it, totaling 610,000 men, a bigger commitment for the US Army than Normandy, where nineteen divisions fought, and far larger than the Pacific. More than D-Day and the battle for Normandy the Ardennes was a far more fundamental test of American soldiers. Surprised and outnumbered, sometimes leaderless and operating in Arctic weather conditions, they managed to prevail against the best men that Nazi Germany could throw against them.

The quality of an army is measured not when all is going to plan, but when the unexpected happens. The 1944-45 Ardennes campaign was a test and on a scale like no other. So on 16 December each year, spare a thought for those GI veterans and civilians in Belgium, perhaps when you’re munching on some holiday nuts.

Peter Caddick-Adams is a lecturer in military history and current defense issues at the UK Defence Academy. He is the author of Snow and Steel: The Battle of the Bulge, 1944-45; Monte Cassino: Ten Armies in Hell; and Monty and Rommel: Parallel Lives. He holds the rank of major in the British Territorial Army and has served with U.S. forces in Bosnia, Iraq, and Afghanistan.