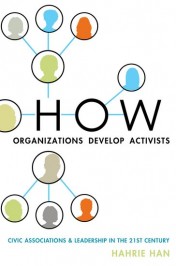 How Organizations Develop Activists: Civic Associations and Leadership in the 21st Century

Oxford Dictionaries included slacktivism on its Word of the Year 2014 shortlist, so we invited several experts to comment on this Internet activism phenomenon.

The term slacktivism is based on a question that should never have been asked: are digital activists doing anything worthwhile, or are they mere “slacktivists,” activists who are slacking off?

The word arose from a debate about what value there was to all those people who were willing to click a few buttons to express their outcry over the shooting of Trayvon Martin or participate in the ALS ice-bucket challenge—but do nothing else. While some have hailed this new era of digital activism as a great democratizing force, opening up the political process and giving voice to people in a new way, others have scoffed at its impact. “The revolution will not be tweeted,” Malcolm Gladwell famously wrote.

Asking whether digital activism is a meaningful lever for social change is the wrong question to ask for several reasons.

First, the forms and capabilities of digital activism itself are changing rapidly, so that answers to the question become obsolete almost as fast as the technologies on which they are based.

Second, the types and uses of digital activism are as diverse as traditional forms of activism, ranging tremendously in what they can accomplish. So there is no one-size-fits-all answer to this question. Digital activism, like regular activism, can be both effective and ineffective, both thin and thick.

Third, and perhaps most importantly, focusing on digital activism puts the emphasis on the tools, not the people who use the tools. The success of any change effort has always depended on the capabilities of the people who use whatever tools are at their disposal.

So let’s put the debate about slacktivism to rest. Instead, let’s begin asking how we can use technology to create transformative spaces where people can develop their individual and collective agency. If technology can create the kinds of interpersonal, transformative spaces face-to-face organizations have built for years, then we’ll be able to get the depth we want, but on a grander scale than we’ve ever had before.

Hahrie Han is Associate Professor of Political Science at Wellesley College. She is the author of How Organizations Develop Activists: Civic Associations and Leadership in the 21st Century. Follow her on Twitter @HahrieHan.