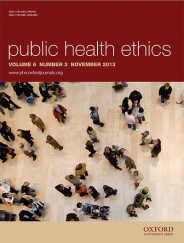 Oxford University Press is offering free access to 50 articles on Ebola in response to the outbreak in West Africa.

Public Health Ethics (PHE) is a peer-reviewed international journal that focuses on the systematic analysis of the moral problems that arise in public health and preventive medicine. PHE combines theoretical and practical work from many different fields, notably philosophy, law, and politics, but also epidemiology and the medical sciences.

How did the international community get the response to the Ebola outbreak so wrong? We closed borders. We created panic. We left the moribund without access to health care. When governments in Liberia, Sierra Leone, Senegal, Guinea, Mali, and Nigeria called out to the world for help, the global response went to mostly protect the citizens of wealthy nations before strengthening health systems on the ground. In general, resources have gone to guarding borders rather than protecting patients in the hot zone from the virus. Yet, Cuba broke this trend by sending in hundreds of its own health workers into the source of the epidemic. Considering the broader global response to Ebola, why did Cuba get it so right?

Ebola impacted countries, and the World Health Organization (WHO), called out for greater human resources for health. While material supplies arrived, many countries tightened travel restrictions, closed their doors and kept their medical personnel at home. At a time when there has never been greater knowledge, more money, and ample resources for global health, the world responded to an infectious pathogen with some material supplies, but also with securitization, experimental vaccines, and forced quarantines – all of which oppose accepted public health ethics. The result is that without human resources for health on the ground, the supplies stay idle, the vaccines remain questionable, and the securitization instills fear.

The Global North evacuated their infected citizens. These evacuations spawned donations to the WHO and then led to travel bans. The United Kingdom provided £230 million in material aid to West Africa. The United States committed $175 million to combat the virus by transporting supplies and personnel, with an estimated 3,000 soldiers to be involved in the response. Canada’s government provided some $35 million to Ebola, including a mobile testing lab, sanitary equipment and 1,000 vials of experimental vaccines that have yet to arrive in West Africa or even be tested on humans. Canada then followed the example of Australia, North Korea, and other nervous nations, in imposing a visa ban on persons traveling from Ebola affected countries. Even Rwanda imposed screening on Americans because of confirmed cases in the United States.

Despite this global trend, Cuba — a small and economically hobbled nation — chose to make a world of difference for those suffering from Ebola by sending in 465 health workers, expanding hospital beds, and training local health workers on how to treat and prevent the virus. Cuba is the only nation to respond to the call to stop the Ebola epidemic by actually scaling up health care capacity in the very places where it is needed the most. Even with a Gross Domestic Product per capita to that of Montenegro, Cuba has proven itself as a global health power during the 2014 Ebola outbreak. Many scholars and pundits have been left wondering not only how a low-income country, with its own social and economic challenges, could send impressive medical resources to West Africa, but also why they would dive into the hot zone in the first place — especially when nobody else dares to do so.

Cuba is globally recognized as an outstanding health-care power in providing affordable and accessible health services to its own citizens and to the citizens of 76 countries around the world, including those impacted by Ebola. Cuba’s health outreach is grounded in the epistemology of solidarity — a normative approach to global health that offers a unique ability of strengthening the core of health systems through long-term commitments to health promotion, disease prevention and primary care. Solidarity is a cooperative relationship between two parties that is mutually transformative by maximizing health-care provision, eroding power structures that promote inequity, and by seeking out mutual social and economic benefit. The reason for the general amazement and wonder over Cuba’s Ebola-response stems from a lack of depth in understanding the normative values of solidarity, as it is not a driving force in the global health outreach by most wealthy nations. The ethic of solidarity can even be seen on the ground in West Africa with Cuban doctors like Ronald Hernandéz Torres posting photos of his Ebola team wearing the protective gear, while giving the thumbs and peace sign — an incredible snapshot of humanity that contrasts the typically frightening images of Ebola health workers.

Solidarity is not charity. Charity is governed by the will of the donor and cannot be broad enough to overcome health calamities at a systems level. Solidarity is also not pure altruism. Selfless giving is based on exceptional, and often short-term, acts for no expectation of reward or reciprocity. For Cuba, solidarity in global health comes with the expectation of cooperation, meaning that the recipient nation should offer some level of support to Cuba, be it financial or political. Solidarity also means that there is a long-term relationship to improve the strength of a health system. Cuba’s current commitment to Ebola could last months, if not years.

Cuba’s global health outreach can be approached through the lens of solidarity. This example implies engaging global health calamities with cooperation over charity, with human resources in addition to material resources, and ultimately with compassion over fear. This approach could well be at the heart of wiping out Ebola — along with every other global health calamity that continues to get the best of us because we have not yet figured out how to truly take care of each other.

Dr. Robert Huish is Assistant Professor at Dalhousie University in International Development Studies. He is the author of Where No Doctor has Gone Before: Cuba’s Place in the Global Health Landscape (Wilfrid Laurier University Press). He was named one of Canada’s most innovative educators in the Globe and Mail’s Our Time to Lead series. He is author of a recently published paper, "Why Does Cuba ‘Care’ So Much? Understanding the Epistemology of Solidarity in Global Health Outreach" published in Public Health Ethics. Follow Dr. Huish at @ProfessorHuish.