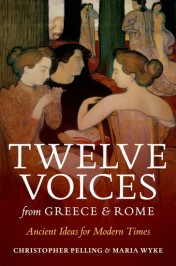 The ancient writers of Greece and Rome are familiar to many, but what do their voices really tell us about who they were and what they believed? In Twelve Voices from Greece and Rome, Christopher Pelling and Maria Wyke provide a vibrant and distinctive introduction to twelve of the greatest authors from ancient Greece and Rome, writers whose voices still resonate across the centuries. Below is an infographic that shows how each of the great classical authors would describe their voice today, if they could.

Christopher Pelling is Regius Professor of Greek at the University of Oxford. He has worked and published extensively on Classical Greek historiography and biography. Among his numerous publications are Twelve Voices from Greece and Rome: Ancient Ideas for Modern Times, Literary Texts and the Greek Historian (2000) and Plutarch and History: Eighteen Studies (2002).

Maria Wyke is Professor of Latin at University College London. She is the author of Twelve Voices from Greece and Rome: Ancient Ideas for Modern Times and has written extensively on Roman love poetry (collected in The Roman Mistress: Ancient and Modern Representations, 2002), on Julius Caesar (Caesar: A Life in Western Culture, 2007, and Caesar in the USA, 2012), and on ancient Rome in cinema (Projecting the Past: Ancient Rome, Cinema and History, 1997).

The real scandal of Dante’s Beatrice