Word Origins and How We Know Them

Anatoly Liberman's column on word origins, The Oxford Etymologist, appears on the OUPblog each Wednesday. Send your etymology question to him care of [email protected]; he’ll do his best to avoid responding with “origin unknown.” Subscribe to Anatoly Liberman’s weekly etymology articles via email or RSS.

Continued from “Bimonthly etymology gleanings for August and September 2014. Part 1”…

A correspondent cited a few tentative etymologies of English words.

I am sorry to disappoint our correspondent, but such haphazard comparisons should be abandoned. To discover the origin of old words, one has to compare their most ancient attested forms. For example, kauen always had a diphthong, while cow has its late diphthong from a long monophthong that once sounded like Modern Engl. oo (compare German Kuh). And so it goes. On the more intuitive level, one should realize that, if a word has baffled professional scholars for centuries, the most tempting solutions have probably been offered and rejected. By the way, the Dutch compound for “bride and bridegroom” is bruidspaar, not brudespaar; the word has nothing to do with brooding.

Another correspondent wrote that the Russian word for “kiss” also means “to aim.” Whoever suggested this connection seems to have confused the Russian words tsel “whole” (discussed in the post on kissing) and tsel’ “aim.” The sign l’ stands for palatalized (or “soft”) l; where the transliteration has an apostrophe Russian has a special letter (the so-called miagkii znak). Tsel is an old word, while tsel’ is a borrowing of German Ziel “aim” (more precisely, Middle High German), via Polish.

Still another correspondent wonders whether the noun chapbook and the verb tucker (out) “to tire, to weary” can be of Hindi origin. I think chapbook has such a transparent English derivation that it does not merit further discussion. Tucker is probably a frequentative of tuck, like very many verbs of this structure. There is no denying the fact that our correspondent cited Hindi words that have both the form and the meaning closely corresponding to chapbook and tucker. But, as I have written many times while answering similar questions, the fact of borrowing can be ascertained only if we succeed in showing how a foreign word reached English (compare the history of thug, which is indeed from Hindi, or other examples cited in the great book Hobson-Jobson). Was tucker used mainly by Hindi speakers? Do we have any proof that this verb spread from their community? Only a detailed investigation along such lines can sound convincing. Otherwise, we will stay with kauen ~ cow and their likes.

Wise restraint. An old colleague of mine wrote in connection with my post on roil.

“Honoré de Balzac published in 1842 a novel called La Rabouilleuse. The title name is explained as being a word local to the Berry region of France where a young girl is employed to stir up the mud in a stream, thus clouding the water and permitting a fisherman to more readily catch crayfish (crawfish?). One can easily see the way the word is formed: the verb bouillir “boil” plus a reduplicating prefix ra- and a feminine agent suffix. Now the verb rabouillir or some variant of it might fit in with roil both with some phonemes and the meaning.”

The author of the letter did not suggest any solution, and I think he was right to do so. The coincidence looks like being due to chance.

Every now and then I run into publications that would have come in most useful in my earlier posts and comments. But it is never too late to pick up even the oldest chestnuts. For instance, I have challenged the supporters of they ~ them in sentences like when a student comes, I never make them wait to give examples that are really old. Almost nothing has turned up. But here are two more phenomena that have aroused some interest among our readers.

Split infinitive. It would seem that passionate, as opposed to rational, splitting set in several decades ago, and the construction I called to be or to not be conquered the ugly day. Roswitha Fischer’s article on the split infinitive appeared in 2007; however, I read it only this summer. Among many other examples, she quoted Wycliffe: “It is good for to not ete fleisch and for to not drynke wyn” (ca. 1382). I do not follow Wycliffe’s recommendation but in defense of his grammar should say that with for to he had nowhere else to put the negation. I am sure everybody will remember: “Simple Simon went a-fishing, / For to catch a whale.” Nowadays, for to, an analog of German um zu, is dead, except in some dialects.

One… his. We have been taught to say one…one’s. But people keep correlating one with his (now probably their; see above). In The Nation for 1921 I found a letter to the editor from Steven T. Byington (Ballard Vale, Massachusetts) with the funny title Four Centuries of Onehese. The writer quoted five sentences with one—his. I’ll reproduce only the relevant part of them:

Among other things, the letter discusses the utterance: “One oughtn’t never take nothing that ain’t theirn.” I suspect that in the great books on English grammar by Jespersen, Poutsma, and Curme many more examples of the one… his type will be found. A certain Markman, a friend of James Steerforth’s, “always spoke of himself indefinitely as a ‘man’, and seldom or never in the first person singular” (David Copperfield, Chapter 24 “My First Dissipation”). This way of speaking may help those who have trouble with one. 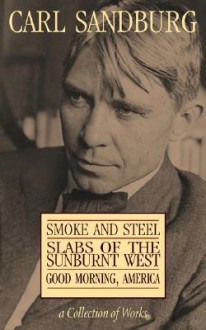 Also in The Nation, this time for 1922, I found a more than enthusiastic review by Clement Wood of Carl Sandburg’s fourth book of poetry Slabs of the Sunburnt West. In the opening paragraph, Wood expressed his delight about Sandburg’s use of slang. I ran the list by my undergraduate students. Here it is: humdinger, flooey, *phizzogs, fixers, frame–up, *four–flushers, rakeoff, getaway, junk, *fliv, fake, come clean, gabby mouth, *hoosegow, *teameo, *work plug, lovey, slew him in, bull, jazz, scab, booze, stiffs, hanky-pank, hokum, bum, and buddy.

The words that no one recognized are given above with an asterisk. I knew more. However, some of them I knew by chance. For instance, long ago, a bookstore near our main campus closed its doors. It began to sell its stock at a small discount, but every two days the prices went down. The only books that no one wanted to take even when they were free were those by American poets. I grabbed the entire batch and read everything. In this rather dubious treasure trove, I discovered Sandburg, read his poem called Phizzogs, and looked up the word. It has never occurred in my reading since that day. In my work, I have dealt with synonyms for “prison,” so that hoosegow was quite familiar to me. I also knew fliv, but the word is forgotten. This is what I expected, for once I tried the same experiment with jitney and drew blank, while people of my age recognized it immediately. If I had run into a poker player, such a person would have had no trouble identifying four-flushers. Fixers, bull, work plug, slew him in, and stiffs look transparent, but without the context it is impossible to decide their exact meaning. We of course guessed that hanky–pank is a back formation on hanky-panky.

My students say that, when they watch movies of the fifties, they do not understand the slang used there, while their parents are in the dark when it comes to the slang of their children. On the other hand, the words given in bold in my list are today so familiar that no one would have referred to them as particularly striking. One should take into consideration that, to know one’s language, one has to read the literature written in it. It is curious to follow the modern annotations of Oliver Twist and Vanity Fair. Both Dickens and Thackeray used slang quite generously, and the commentators assume that no one understands it today. Perhaps they are right.

I still have some questions unanswered and will take care of them at the end of October.

An interdisciplinary view of cows and bulls. Part 1: cow

Thoughts on the origin of the word “bride” [Part I]