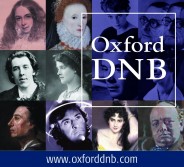 The Oxford Dictionary of National Biography is a collection of nearly 60,000 life stories of noteworthy Britons, from the Romans to the 21st century. The ODNB is freely available via public libraries across the UK, and many libraries worldwide. Libraries offer remote access allowing members to gain access free, from home (or any other computer), 24 hours a day. You can also sample the ODNB with its changing selection of free content: a biography podcast with 200+ episodes; a topical Life of the Day, and historical people in the news via Twitter @odnb.

September 2014 marks the tenth anniversary of the publication of the Oxford Dictionary of National Biography. Over the next month a series of blog posts explore aspects of the Dictionary’s online evolution in the decade since 2004. In this post, Henry Summerson considers how new research in medieval biography is reflected in ODNB updates.

Today’s publication of the Oxford Dictionary of National Biography’s September 2014 update—marking the Dictionary’s tenth anniversary—contains a chronological bombshell. The ODNB covers the history of Britons worldwide ‘from the earliest times’, a phrase which until now has meant since the fourth century BC, as represented by Pytheas, the Marseilles merchant whose account of the British Isles is the earliest known to survive. But a new ‘biography’ of the Red Lady of Paviland—whose incomplete skeleton was discovered in 1823 in Wales, and which today resides in Oxford’s Museum of Natural History—takes us back to distant prehistory. As the earliest known site of ceremonial human burial in western Europe, Paviland expands the Dictionary’s range by over 32,000 years.

The Red Lady’s is not the only ODNB biography pieced together from unidentified human remains (Lindow Man and the Sutton Hoo burial are others), while the new update also adds the fifteenth-century ‘Worcester Pilgrim’ whose skeleton and clothing are on display at the city’s cathedral. However, the Red Lady is the only one of these ‘historical bodies’ whose subject has changed sex—the bones having been found to be those of a pre-historical man, and not (as was thought when they were discovered), of a Roman woman.

The process of re-examination and re-interpretation which led to this discovery can serve as a paradigm for the development of the DNB, from its first edition (1885-1900) to its second (2004), and its ongoing programme of online updates. In the case of the Red Lady the moving force was in its broadest sense scientific. In this ‘he’ is not unique in the Dictionary. The bones of the East Frankish queen Eadgyth (d.946), discovered in 2008 provide another example of human remains giving rise to a recent biography. But changes in analysis have more often originated in more conventional forms of historical scholarship. Since 2004 these processes have extended the ODNB’s pre-1600 coverage by 300 men and women, so bringing the Dictionary’s complement for this period to more than 7000 individuals.

In part, these new biographies are an evolution of the Dictionary as it stood in 2004 as we broaden areas of coverage in the light of current scholarship. One example is the 100 new biographies of medieval bishops that, added to the ODNB’s existing selection, now provide a comprehensive survey of every member of the English episcopacy from the Conquest to the Reformation—a project further encouraged by the publication of new sources by the Canterbury and York Society and the Early English Episcopal Acta series.

Taken together these new biographies offer opportunities to explore the medieval church, with reference to incumbents’ background and education, the place of patronage networks, or the shifting influence of royal and papal authority. That William Alnwick (d.1449), ‘a peasant born of a low family’, could become bishop of Norwich and Lincoln is, for example, indicative of the growing complexity of later medieval episcopal administration and its need for talented men. A second ODNB project (still in progress) focuses on late-medieval monasticism. Again, some notable people have come to light, including the redoubtable Elizabeth Cressener, prioress of Dartford, who opposed even Thomas Cromwell with success.

Away from religious life, recent projects to augment the Dictionary’s medieval and early modern coverage have focused on new histories of philanthropy—with men like Thomas Alleyne, a Staffordshire clergyman whose name is preserved by three schools—and of royal courts and courtly life. Hence first-time biographies of Sir George Blage, whom Henry VIII used to address as ‘my pig’, and at a lower social level, John Skut, the tailor who made clothes for most of the king’s wives: ‘while Henry’s queens came and went, John Skut remained.’

Alongside these are many included for remarkable or interesting lives which illuminate the past in sometimes unexpected ways. At the lowest social level, such lives may have been very ordinary, but precisely because they were commonplace they were seldom recorded. Where a full biography is possible, figures of this kind are of considerable interest to historians. One such is Agnes Cowper, a Southwark ‘servant and vagrant’ in the years around 1600; attempts to discover who was responsible for her maintenance shed a fascinating light on a humble and precarious life, and an experience shared by thousands of late-Tudor Londoners. Such light falls only rarely, but the survival of sources, and the readiness of scholars to investigate them, have also led to recent biographies of the Roman officers and their wives at Vindolanda, based on the famous ‘tablets’ found at Chesterholm in Northumberland; the early fourteenth-century anchorite Christina Carpenter, who provoked outrage by leaving her cell (but later returned to it), and whose story has inspired a film, a play and a novel; and trumpeter John Blanke, whose fanfares enlivened the early Tudor court and whose portrait image is the only identifiable likeness of a black person in sixteenth-century British art.

While people like Blanke are included for their distinctiveness, most ODNB subjects can be related to the wider world of their contemporaries. A significant component of the Dictionary since 2004 has been an interest in recreating medieval and early modern networks and associations; they include the sixth-century bringers of Christianity to England, the companions of William I, and the enforcers of Magna Carta. Each establishes connections between historical figures, sets the latter in context, and charts how appreciations of these networks and their participants have developed over time—from the works of early chroniclers to contemporary historians. Indeed, in several instances, notably the Round Table knights or the ‘Merrie Men’, it is this (often imaginative) interpretation and recreation of Britain’s medieval past that is to the fore.

The importance of medieval afterlives returns us to the Red Lady of Paviland. His biography presents what can be known, or plausibly surmised, about its subject, alongside the ways in which his bodily remains (and the resulting life) have been interpreted by successive generations—each perceptibly influenced by the cultural as well as scholarly outlook of the day. Next year sees the 800th anniversary of the granting of Magna Carta, a centenary which can be confidently expected to bring further medieval subjects into Oxford Dictionary of National Biography. It is unlikely that the historians responsible will be unaffected by considerations of the long-term significance of the Charter. Nor, indeed, should they be—it is the interaction of past and present which does most to bring historical biography to life.

Dr Henry Summerson is the editor for pre-1600 content in the Oxford Dictionary of National Biography and a researcher at the Magna Carta Project, King’s College, London.