The History of King Lear 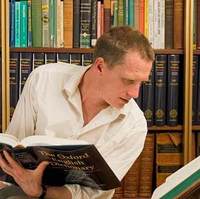 What was your inspiration for Bad English?

I am often guilty of spectacular incompetence when I try to use the English language, and I wanted to find some justification for my poor usage. I am happy to report that we have all been committing unseemly acts with English for many hundreds of years.

In library basements, preferably when they are empty of people.

I hadn’t so much of an ‘a-ha’ moment that made me want to be a writer as I had a series of ‘uh-oh’ moments while doing other things that did not involve writing.

I can distinguish between Sonny Stitt and Charlie Parker, and between Phil Woods and Gene Quill, in under four measures.

Too Loud a Solitude by Bohumil Hrabal.

My wife reads my first drafts, and, if she is feeling particularly generous, my second and third ones as well.

Not unless I absolutely have to.

I have no marked preference. I will write on whatever is at hand, and this ranges from cellular telephones to antiquated typewriters.

What book are you currently reading? (And is it in print or on an e-Reader?)

Charlie and the Chocolate Factory, with my son, and in print.

I reject the premise of this question.

Someone who wished he was a writer.

Ammon Shea is the author of Bad English, Reading the OED, The Phone Book, Depraved English (with Peter Novobatzky), and Insulting English (with Peter Novobatzky). He has worked as consulting editor of American dictionaries at Oxford University Press, and as a reader for the North American reading program of the Oxford English Dictionary. He lives in New York City with his wife (a former lexicographer), son (a potential future lexicographer), and two non-lexical dogs.