The Normans and Empire


The expansion of the peoples calling themselves the Normans throughout northern and southern Europe and the Middle East has long been one of the most popular and written about topics in medieval history. Hence, although devoted mainly to the history of the cross-Channel empire created by William the Conqueror’s conquest of the English kingdom in 1066 and the so-called loss of Normandy in 1204, I wanted to contribute to these discussions and to the ongoing debates about the impact of this expansion on the histories of the nations and cultures of Europe. That peoples from a region of northern France should become conquerors is one of the apparently inexplicable paradoxes of the subject. The other one is how the conquering Normans apparently faded away, absorbed into the societies they had conquered or within the kingdom of France.

In 1916 Charles Homer Haskins’ made the statement that the Normans represented one of the great civilising influences in European – and indeed world – history. If, a century later, hardly anyone would see it thus, the same imperatives remain, namely to locate the Normans within a context in which it remains popular to write national histories, and, for some, in the midst of debates about the balance of the History curriculum, to see them as being of paramount importance. The history of the Normans cuts across all this, but is an inescapable subject in relation to the histories of the English, French, Irish, Italian, Scottish, and Welsh. Those currently fashionable concepts – and rightly so – ‘The First English Empire’ and ‘European change’ are also at the centre of the debates. 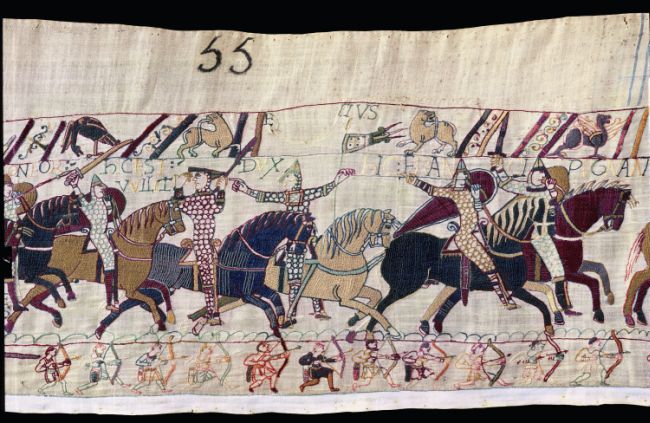 As a concept, empire is nowadays both fashionable and much argued about, a universal phenomenon of human history that has been the subject of several major television programmes. It is a subject that requires a multidisciplinary approach. Over the last two millennia, statements by both contemporaries and subsequent commentators have often set a proclaimed imperial civilising mission as a positive feature against the impact of violence and the social and cultural subjugation of the subjects of an empire. Seen thus, the concept of empire has an obvious relevance to the subject of the Normans. And, in relation to the pan-European expansion of the Normans, and, in particular, to the creation of the kingdom of Sicily, the term diaspora, as it is understood in the social sciences, constitutes a persuasive framework of analysis. Taken together, the two terms empire and diaspora create a world in which individuals and communities had to adapt rapidly to new forms of power and cultures and in which identities are multiple, flexible, and often uncertain. For this reason, the telling of life-histories is of central importance rather than simplified notions of social and cultural identity. One consequence must be the abandonment of the currently popular and unhelpful word Normanitas. The core of this book is a history of power, diversity and multiculturalism in the midst of the complexities of a changing Europe.

The use of terms such as hard power, soft power, hegemony, core and periphery, and cultural transfer can be used to frame interpretations of many national histories, including Welsh, Scottish, and Irish, as well as English. The crucial points in all cases are the mixture of engagement with the dominant imperial power and the perpetuation of difference and diversity through the exercise of agency beyond the core. The framework is one that works especially well in relation to the evolving histories of the Welsh kingdoms/principalities and of the kingdom of Scots. It also means that the so-called ‘anarchy’ of 1135 to 1154, the succession dispute between King Stephen and the Empress Matilda becomes a civil war which needs to be set in a cross-Channel context and through which there were many continuities. And Magna Carta (1215), of which the eight-hundredth anniversary is fast approaching, becomes a consequence of imperial collapse. However, a focus on England and the British Isles just does not work. Normandy’s centrality to the history of the cross-Channel empire created in 1066 is of basic importance. Both morally and militarily the creation of the cross-Channel empire brought problems of a new kind that were for some living, or mainly domiciled, in Normandy a source of anguish. The book’s cover has indeed been chosen with this in mind. It shows troubled individuals who have narrowly escaped disaster at sea, courtesy of St Nicholas. But they successfully made the crossing. And so, of course, did the Tournai marble on which they are carved.

Professor David Bates took his PhD at the University of Exeter, and over a professional career of more than forty years, he has held posts in the Universities of Cardiff, Glasgow, London (where he was Director of the Institute of Historical Research from 2003 to 2008), East Anglia, and Caen Basse-Normandie. He has worked extensively in the archives and libraries of Normandy and northern France and has always sought to emphasise the European dimension to the history of the Normans. ‘He currently holds a Leverhulme Trust Emeritus Fellowship to enable him to complete a new biography of William the Conqueror in the Yale University Press English Monarchs series. His latest book is The Normans and Empire.