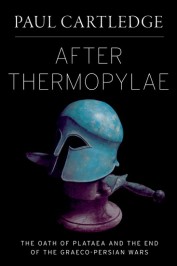 After Thermopylae: The Oath of Plataea and the End of the Graeco-Persian Wars

The Battle of Plataea in 479 BCE is one of world history's unjustly neglected events. It decisively ended the threat of a Persian conquest of Greece. It involved tens of thousands of combatants, including the largest number of Greeks ever brought together in a common cause. For the Spartans, the driving force behind the Greek victory, the battle was sweet vengeance for their defeat at Thermopylae the year before. Why has this pivotal battle been so overlooked?

Let’s be clear of one thing right from the word go: this is not in any useful sense a historical movie. It references a couple of major historical events but is not interested in ‘getting them right’. It uses historical characters but abuses them for its own dramatic, largely techno-visual ends. It wilfully commits the grossest historical blunders. This is in fact a historical fantasy-fiction movie and should be viewed and judged only as such. But in case any classroom teachers of Classical civilization or Classical history should be tempted to use it as a teaching aid: caveant magistri — let the teachers beware! Here are just five ways in which the movie is at best un-historical, at worst anti-historical.

(1) Error sets in with the very title: the ‘300’ bit is a nod to Zack Snyder’s infinitely more successful 2006 movie to which this is a kind of sequel, and there is not just allusion to but bodily lifting of a couple of scenes from the predecessor. But which Empire is supposed to be on the rise here? I suppose that it’s meant to be, distantly, the ‘Athenian Empire’, but that didn’t even begin to rise until at least two years after the events the movie focuses on: the sea-battles of Artemisium and Salamis that both took place in 480 BCE.

(2) The movie gets underway with a wondrously unhistorical javelin-throw — cast by Athenian hero Themistokles (note the pseudo-authentic spelling of his name with a Greek ‘k’) on the battlefield of Marathon near Athens in 490 BCE, a cast which kills none other than Persian Great King Darius I, next to whom is standing his son and future successor Xerxes. Actually, though Darius had indeed launched the Persian expedition that came to grief at Marathon, he was not himself present there, nor was Xerxes.

Themistocles, on the other hand, was indeed present, but rather than carrying and throwing a javelin he was fighting in a dense phalanx formation and wielding a long, heavy pike armed with a fearsome iron tip made for thrusting into the Persian enemy hand-to-hand.

(3) From the Persians’ Marathon defeat, which (historically) accounts for their return revenge expedition under Xerxes, the scene shifts to the Persians’ fleet — in fact, a whole decade later. Connoisseurs of 300 will have been prepared for the digitally-enhanced, multiply-pierced and bangled Rodrigo Santo reprising his role of ‘god-king’ Xerxes. (Actually Persian king-emperors were not regarded or worshipped as gods.) Even they, though, will not necessarily have expected the Persian fleet to be under the command of a woman, and a Greek woman at that: Queen Artemisia of Halicarnassus (modern Bodrum), who is represented (in the exceedingly fetching person of Eva Green) as the equal if not superior of Xerxes himself, with her own court of fawning and thuggish male attendants, all hunks of beefcake.

Here the filmmakers are indeed drawing on a properly historical well of evidence: Artemisia — so we learn from Herodotus, her contemporary, fellow-countryman, and historian of the Graeco-Persian Wars — was indeed a Greek queen, who did fight for Xerxes and the Persians at Salamis. She did allegedly earn high praise from Xerxes as well as from Herodotus for the ‘manly’ quality of her personal bravery and her sage tactical and strategic advice.

But she was far from being admiral-in-chief of the entire Persian navy. She contributed a mere handful of warships out of the total of 600 or so, and those ships of hers could have made no decisive difference to the outcome of Salamis one way or the other.

(4) For some reason — perhaps because they were conscious of the extreme sameness of most of their material, a relentless succession of ultra-gory, stylised slayings, to the accompaniment of equally relentless drum’n’bass background thrummings — the filmmakers of this movie, unlike of 300, have felt the desire or even the need to include one rather prolonged and really quite explicit heterosexual sex-encounter. Understandably, perhaps, this is not between say Themistokles and his wife (or a slave-girl), or between Xerxes and a member of his (in historical fact, extensive) harem.

But — utterly and completely fantastically — it is between Themistokles and Artemisia in the interim between the battles of Artemisium (presented as a Greek defeat; actually it was a draw) and Salamis. Cue the baring of Eva Green’s considerable pectoral assets, cue some exceptionally violent and degrading verbal sparring, and cue virtual rape — encouraged by Artemisia at the time but later thrown back by her in Themistocles’s face as having been inadequate on the virility front.

(5) The crowning, climactic historical absurdity, however, is not the deeply unpleasant coupling between Themistokles and Artemisia, but the notion that in order for Themistocles and his Athenians to defeat the Persian fleet at Salamis they absolutely required the critical assistance of the massive Spartan navy which — echoes here of the US cavalry in countless westerns — turned up just in the nick of time, commanded by another Greek woman and indeed queen, Gorgo (widow of Leonidas, the hero of 300), again played by Lena Headey.

Actually, Sparta contributed a mere 16 warships to the united Greek fleet of some 400 ships at Salamis, and like Artemisia’s they made absolutely no difference to the outcome, which was resoundingly and incontestably an Athenian victory. The truly Spartan contribution to the overall defeat of the Persian invasion was made in very different circumstances, on land and by the heavy-infantry Spartan hoplites, at the battle of Plataea in the following summer of 479. But that is quite another story, one in which the un- or anti-historical filmmakers show not even a particle or scintilla of interest.

Paul Cartledge is the A.G. Leventis Professor of Greek Culture at the University of Cambridge and the author of After Thermopylae: the Oath of Plataea and the End of the Graeco-Persian Wars (OUP, 2013). He hastens to make clear that he was not in any way a consultant on '300: Rise of an Empire', as he had been, in a minor way, on '300'.