Stories about Stories: Fantasy and the Remaking of Myth

When I first read The Lord of the Rings, I came away feeling I had just spent a week in another world. I liked the characters, loved the epic scale, and was moved by the story of endurance and sacrifice, but it was the place that really got me. I wanted to go back. As soon as possible. I wanted to wander among the ancient forests, the gleaming caverns, the towering and sometimes malevolent mountains. I missed the deep layers of time that covered even un-storied, out-of-the-way Hobbiton. And I longed for the order and meaning that underlay everything, surfacing occasionally in the form of a prophecy, an enchanted object, or a powerful working of magic.

All of that was there waiting for me in The Hobbit, though on a smaller scale and in a simpler, funnier, more fairy-tale-ish story. And then it wasn’t anywhere else. (I will beg off on judging The Silmarillion and other posthumous publications—they didn’t exist yet.)

“Where can I find more books like Tolkien’s?” I asked friends, family, teachers (in the days before internet searches). I scanned libraries and bookstores for other covers that looked like his and found the beginnings of the Ballantine Adult Fantasy series, which held some wonderful discoveries but nothing quite the same. Another publisher called Del Rey started putting out books that looked like The Lord of the Rings but had none of the life or mystery. Like Gertrude Stein’s Oakland, there was no there, there. A few years later, Ursula K. Le Guin opened a portal to Earthsea, which was a place well worth visiting—for me, even a life-changing place—but not the same as Middle-earth. 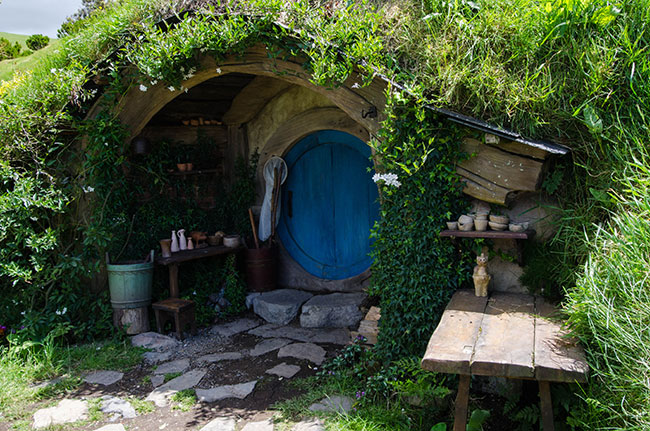 The closest experience I had to that first trip to Tolkien’s Elvish realms came many years later when I was a guest speaker at a community of Benedictine sisters in central Idaho. Set in a spectacular woodland between Camas Prairie and Hell’s Canyon, far from any population center, this monastery offered temporary retreats as well as long-term residencies. As a guest of the sisters, I was put up in the guest house, where all the rooms were named for visionary women: I stayed in the Hildegarde of Bingen room. In that room at night, I experienced quiet of a sort that is hardly to be found nowadays anywhere on earth. Before my talk I had time to wander through the forest where one could, if so inclined, follow a guided trail of meditations.

Like Middle-earth, this was a place of great natural beauty and significance, a place of study and meditation. It was both Medieval and modern, built by Catholicism but open to those of other religious beliefs or none. Similarly, Middle-earth is deeply imbued by Tolkien’s faith but doesn’t (unlike C. S. Lewis’s Narnia) insist that visitors share its theology.

One of the accusations frequently lobbed at fantasy is that it is a form of escape. The implication is that any time one spends visiting imaginary worlds is time not spent doing one’s duty, uncovering injustices, righting wrongs. Reading realistic fiction doesn’t exactly overthrow tyrants either, but at least the reader is facing facts and presumably arming up for the struggle. Tolkien had a good answer to this charge. The people most concerned about escape, he said, are jailors.

But Tolkien’s comment accepts the terms of the argument. I would suggest that the function of fantasy isn’t escape at all, but retreat, and I don’t mean a military retreat but a spiritual one. What I find in Middle-earth is quiet, harmony, and self-knowledge. The quiet is the quiet of trees: not quite silence but the slow breathing of leaves. The harmony is glimpsed in all those moments that the filmed versions of both The Hobbit and The Lord of the Rings want us to hurry past: the pauses, the songs, the conversations. It comes from Tolkien’s powerful sense of place: for the look of a star glimpsed through branches, the smell of mushrooms in damp soil, the feel of a day’s long march through open countryside, the glow of a fire at day’s end. This harmony is why Middle-earth is worth the strife and the horror–which are the parts of the books the movies do so well. It is also the thing that gives hobbits and humans the strength to keep struggling even when there seems to be no hope.

The self-knowledge that comes of this retreat is a little harder to pinpoint. We are used to finding self-knowledge in tragedy. Oedipus teaches us about hubris, Othello about blind jealousy, Lear about how little control we have over our own existence. Tolkien’s stories are comedies: they end with treasure and marriage and return to home and hearth, rather than with alienation and death. We don’t think of comedy as a source of deep insight, but that may be because we assume the self we are coming to know is an isolated self-contained thing. Joseph Meeker, in a book called The Comedy of Survival, suggested that critics since Aristotle have gotten it wrong. The comic vision is more profound than the tragic, because it doesn’t glorify the individual. It tells us we are small, ridiculous, incomplete, and interconnected. We are, in a word, hobbits.

So I go on retreat now and again, and I come back each time remembering why I don’t count for very much in the larger scheme of things but also why I need to keep up the struggle. Each time I read The Lord of the Rings or The Hobbit, I bring back a little of that harmony, a little stillness, a little starlight. Those things are always around, but I forget to notice them. Tolkien reminds us that we too live in Middle-earth.

Brian Attebery is Professor of English at Idaho State University and author of the upcoming book, Stories about Stories: Fantasy and the Remaking of Myth. He is Editor of Journal of the Fantastic in the Arts. He is also the coeditor, with Ursula K. Le Guin, of The Norton Book of Science Fiction (Norton, 1997) and the author of Decoding Gender in Science Fiction (Routledge, 2002), among other works.