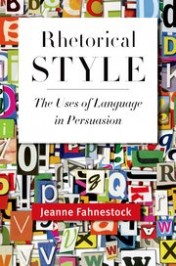 A comprehensive guide to the language of argument, Rhetorical Style offers a renewed appreciation of the persuasive power of the English language.

Perhaps no speech in the canon of American oratory is as famous as the “Dedicatory Remarks” delivered in a few minutes, one hundred and fifty years ago, by President Abraham Lincoln. Though school children may no longer memorize the conveniently brief 272 words of “The Gettysburg Address,” most American can still recall its opening and closing phrases. It has received abundant and usually reverent critical attention, especially from rhetoricians who take a functional view of discourse by always asking how an author’s choices, deliberate or not, achieve an author’s purposes. Of these many studies, the greatest is Garry Wills’s Lincoln at Gettysburg (Simon & Schuster, 1992). It leaves little unsaid about the genre, context, and content of the speech, or about the grandeur and beauty of its language, the product of Lincoln’s long self-education in and mastery of prose composition. But while the rhetorical artistry of Lincoln’s speech is uncontestable, it can also be said that its medium, the English language, was and is an instrument worthy of the artist. Among all the ways that this speech can be celebrated for its author, its moment in history, and its lasting effects, still another way is as monument to the resources of the English.

In its amazing lexicon, the largest of any living language in Lincoln’s time or ours, English is, thanks to the accidents of history, a layered language. The bottom layer, containing its simplest and most frequently used words, is Germanic. The Norman invasion added thousands of Latin words, but detoured through French to create, according to eighteenth-century British rhetoricians like Hugh Blair, a distinctive French layer in English. Throughout its history, but peaking between 1400 to 1700, words were stacked on directly from Latin and Greek to form a learned and formal layer in the language. (English of course continues borrowing from any and all languages today.) It is therefore not unusual in synonym-rich English to have multiple ways of saying something, one living on from Anglo-Saxon or Norse, another a French-tinctured option, and still another incorporated directly from a classical language. Consider the alternatives last/endure/persist or full/complete/consummate. Of course no English speaker would see these alternatives as fungible since, through years of usage, each has acquired a special sense and preferred context. But an artist in the English language like Lincoln understands the consequences in precision and nuance of movement from layer to layer. He chose the French-sourced endure at one one point in his Remarks and the Old English full at another.

Lincoln’s awareness of this synonym richness is also on display in his progressive restatement of what he and his audience cannot do at Gettysburg: they cannot  dedicate — consecrate — hallow the ground they stand on. All three verbs denote roughly the same action: to set apart as special and devoted to a purpose. According to the Oxford English Dictionary, the first two came into English in the fourteenth century as adjectives and in the fifteenth as verbs, both formed from the past participle of Latin verbs. The second of these, however, has a twelfth century French cognate, consacrer, in use when French was the language of England’s rulers. The third word, hallow, comes from the Old English core and carries the strongest association of a setting apart as holy. Lincoln’s progression then goes from the Latinate layer to the core, a progression in service of the greatest goal of rhetorical style – to amplify, to express one’s meaning with emotional force. Lincoln’s series of synonyms, simply as a series, distances the living from the dead, but as a progression it rises from the formulaic setting apart with words of dedicate, to the making sacred as a church or churchyard are of consecrate, to the making holy in martyrdom of hallow. Forms of consecrate and dedicate appear again, but hallow only once, mid-speech.

Lincoln’s deftness in word choice is matched by his artistry of sentence form. Among the often-noticed features of Lincoln’s sentence style is his fondness for antithesis. This pattern is hardly Lincoln’s invention. It is one of the oldest forms recommended in rhetorical style manuals and in Aristotle’s Topics as the purest form of the argument from contraries. The formally correct antithesis places opposed wording in parallel syntactic positions: little note nor long remember/ what we say here // never forget/ what they did here.

A figure like antitheses can be formed in languages that carry meaning in inflectional endings as well as in English where word order is crucial, but other figures do not translate as easily. For example, the figure polyptoton requires carrying a term through case permutations. Had Lincoln been writing in Latin, the great concluding tricolon of the speech could have been the jangle populi, populo, populo, the genitive of the people, the ablative by the people, and the dative for the people. But English requires prepositional phrases to do what Latin does in case endings, and in this case a constraint yields a great advantage in prosody. For once listeners pick up the meter of the first and second phrase, they are prepared for the third and their satisfied expectation is part of the persuasiveness of the phrasing.

In all languages, rhetorical discourse springs from situations fixed in time and space. It responds to pressing events, addresses particular audiences and is delivered in particular places that can all be referred to with deictic or “pointing” language linking text to context. Much of the Gettysburg Address defines its own immediate rhetorical situation. Lincoln locates “we,” speaker and audience, on a portion of a great battlefield in a continuing war, and he dwells on the immediacy of this setting in space and time by repeating the word here six times (a seventh in one version, an eighth in another). This often-noted repetition is critical in Lincoln’s purpose. The speech opens in the past and closes in the future, but most of it is in the speaker and listeners’ “here” and “now” so that, held in that place and moment, a touching, a transaction can occur between the dead who gave their last full measure of devotion, and the living who take increased devotion from them.

The Gettysburg Address is profoundly the speech of a moment in our history and it is altogether fitting and proper to remember its anniversary. Yet whenever it is read or spoken it seems to belong to that moment. How is that possible? Because languages like English not only express the situation of an utterance, they also recreate that situation when the language is experienced anew. In this way, read or heard again, the Address once more performs a transaction between America’s honored dead, its author now included, and its living citizens affirming their faith in government of, by and for the people, repeating its language into the future.

Jeanne Fahnestock is Professor Emeritus, Department of English, the University of Maryland. She is the author of Rhetorical Style (Oxford, 2011), Rhetorical Figures in Science (Oxford, 1999), and co-author with Marie Secor of A Rhetoric of Argument (McGraw-Hill, 2004).