Oxford Dictionaries have been collecting lexicographic material and updating dictionaries for over a century now, though its Word of the Year award is still relatively recent. Only since 2004 Oxford Dictionaries have been selecting a word that captures the mood of the previous year. Thinking about the possible contenders for 2013 (twerk? fail? drone? shutdown? bitcoin?) got me to wondering about the past. What would have been in contention for the Word of the Year in 1913, 1933, 1953, 1973, or 1993? The online OED lets us search words by the year of their earliest citation, so I’ve compiled my fantasy list of possible Words of the Year for the twentieth century.

Words with a first citation in 1913 include anti-freeze, behaviorism, big picture, body surfing, celeb, cryology, deboning, Fordist, girl power, groceteria, keypunching, and mneme. It was the age of cars and cinema and industrial innovation. And girl power referred not to feminism, but to the number of women-hours required for a particular task. That meaning has evolved, as has the form of mneme, which we now know as meme.

By 1933 we find biocentrism, careerism, clip joint, discography, Ellingtonian, escapism, em’cee, freeloader, and Hooverville. America was out of work but into music and entertainment. It was also the debut of the UK term body swerve, a football term meaning abrupt dodging to avoid interception. In the United States we find nice nellyism, a euphemism for prudishness. And Nazidom makes its way into the OED.

The postwar era finds 1953 words like binit, bleep, blue chipper, count down, game show, governmentese, and Medicare. That year was also the first citation of both hippie and frenemy, though they had not yet captured the spirit of the age. Binit was replaced by bit and bleep, which first meant a thin, high pitched noise. It later became adapted as a verb meaning to censor, cited first as blip in 1968 and as bleep by 1973.

In 1973 debut citations were found for affluenza, carbo, aspartame, and mouthfeel, all of which suggest an enjoyment of life. New things are entering our consciousness though in the forms of benchmarking, bioethicist, diskette, Derridean, grantsmanship, ecotour, newsfeed, televangelist, and date rape. The word octothorp made its debut as well, though we know it as the hashtag. And the Nixon Administration contributes the combining form –gate.

Fast forward another twenty years to 1993 and we get aight, cosplay, cyber-slacker, e-commerce, mwah-mwah (to give air kisses), schwag, snowblading, and Scooby (meaning “a clue”). With aight, mwah-mwah, schwag, and Scooby, we are breezier in our words, it seems. The internet is now a factor as well with first citations of weblog, web site, and webmaster.

Those are my contenders for the fantasy Words of the Year for the nineteen-teens, -thirties, -fiftes, -seventies and -nineties. Have you made your picks for each year? Here are mine. 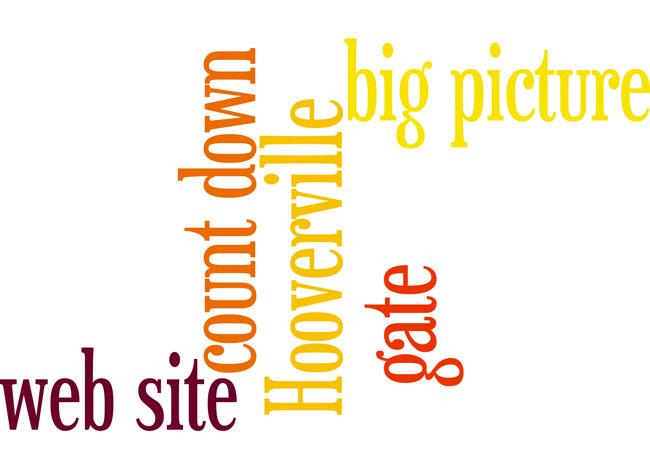 For 1913, I’ll go with big picture, because movies were about to change the world. My 1933 word of the year is Hooverville, referring the homeless encampments built during the Great Depression. For 1953, I’ll go with count down, which ushers in both the nuclear age and will later come to represent the space age (though I must admit that game show is a close runner up). The 1973 word is –gate, which ushers in an age of cynicism, and for 1993, it must be web site.

Here we are in 2013, celebrating the selfie, ubiquitous internet self-portraits made possible by state-of-the-art digital cameras and social media. We’ve come a long way from the big picture of 1913, which brought the outside world into theatres. Today, the world is smaller and our fascination is with the small picture, self-taken and self-distributed. Or perhaps with the selfie, we each create our own version of the big picture, sitting for portraits in our own media galleries. Selfies have been analyzed in the New Yorker and the New York Times (can academe be far behind?) and even been the focus of an exhibition at the Museum of Modern Art. This marriage of technology and culture is an excellent choice for the 2013 Word of the Year.

Edwin Battistella teaches at Southern Oregon University in Ashland, Oregon. His book Sorry About That: The Language of Public Apology will be published by Oxford University Press in May of 2014. His previous books include Bad Language: Are Some Words Better Than Others?, Do You Make These Mistakes in English?: The Story of Sherwin Cody’s Famous Language School, and The Logic of Markedness.