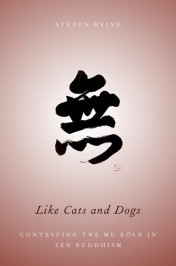 Like Cats and Dogs: Contesting the Mu Koan in Zen Buddhism

Like a number of other traditional East Asian cultural phenomenon, such as kabuki, kimono, kimchee, and kung fu—just sticking to terms that start with the letter “k”—the koan as the main form of literature in Zen Buddhist monastic training has been widely disseminated and popularized in modern American society. Originally pithy and perplexing queries and anecdotes that are aimed at triggering a spiritual awakening beyond ordinary thought and discourse, including “What is the sound of one hand clapping?” and “Does a dog have Buddha-nature?,” koan cases are now practiced and discussed in diverse contemporary venues ranging from Zen centers to the popular media. Recently, a student showed me a koan app, although I soon found that the daily sayings it dispenses are rarely examples of actual Zen writings. This and other factors make me wonder how much, despite signs of fascination, is really known or understood today about the classic Chinese style of composition.

One of the features of traditional koan literature that needs to be assessed is the way many of the most famous cases incorporate imagery related to various animals as allegory. For example, in a case known as the Fox Koan, a monk appears in the form of a magical shape-shifting vulpine to symbolize a basic delusion about karma and moral causality; another example, the Cat Koan features monks quarreling over possession of a prized kitty, which is cut in half by the temple abbot to represent the pitfalls of attachment. In another instance an unwieldy water buffalo ironically has its whole body shoved through the window except for the tail. Also, a series of illustrations referred to as the Ten Ox-herding Pictures portrays a young boy taming the generally wayward and stubborn creature to signify the quest for mastering self-discipline.

What do these examples indicate about the traditional Chinese worldview and its message for the present day? The case about whether a dog can be considered to possess Buddha-nature suggests that the question concerning a dog’s spiritual quality is grounded in an admiration for what canines contributed to temple life by guarding and protecting the compound. Cats and dogs were both prized by Zen monks for their loyalty and efficiency in chasing noxious pests, such as rats or other rodents, or by scaring off intruders. Furthermore, it was sometimes said that the sound of a cat purring or a dog barking, like that of a donkey braying or other mundane natural sound like a pebble striking a stick, could help spark the enlightenment experience for someone needing one more seemingly trivial stimulus—like putting just a drop into a cup full of liquid so that it spills over.

Yet, Zen records, while appreciative of the positive qualities and occasionally allowing for the wise and loving canine, recalling the statue of the loyal Hachiko that commemorates an exceptionally faithful pet at Shibuya Station in downtown Tokyo, do not reflect a simplistic praising of animals, which also exhibit the seemingly inferior behavior of growling and prowling unproductively or not knowing how to control their own actions. In fact, Zen texts often treat the dog as representative of foolishness and folly, as in the comment, “Once a dog sees its shadow and starts barking, a thousand dogs are quickly barking, too,” reminding us of Biblical admonitions evoking canine that eat their own vomit or are not worthy of being offered the sacred.

In a sensational 1960s film called Mondo Cane (It’s a Dog’s World), an expose of decadent societies worldwide, scenes of Americans mourning the death of their dog are juxtaposed with those of Taiwanese butchering and skinning the animals to sell as meat. Probably, for better or worse, the Chinese worldview was closer to the latter stance. In fact, in an example of canine-based sarcasm, a Zen text comments, “[Buddha] hangs up the head of a sheep but sells the meat of a dog.” Note the irony that dog meat is sometimes euphemistically called “fragrant meat” or “mutton of the earth,” although there may be instances in which it is highly valued. Also, bewildered pilgrims are compared to dogs seen as scavengers chasing after clods or bricks tossed randomly rather than real prey, while foolish or demonic clerics are supposed to be thrown to the dogs or hunted down in the way a dog bites into a pig, reminiscent of a Biblical passage in I Kings concerning the punishment of Jezebel. In that vein, a master says of an errant monk, “If I had seen what he did at that time, I would have killed him with a single blow and handed him to the dogs to eat.”

The story of a famous monk’s enlightenment experienced under the watchful eye of his mentor is highlighted by a comment that a dog cannot help but try to lick hot oil while knowing better. An additional critique of squabbling monks indicates, “Noisily, they get caught up in disputes.” According to a comment on this line that uses onomatopoeia for the sound that growling dogs make, “Fighting over and gnawing at rotting bones – crunch! snap! howl! roar!” Disciples who remain attached to selfhood, rather than attaining freedom from this delusion, are likened to the sorry behavior of “a mad dog that is always trying to get more and more to eat.”

“In the East,” it was said by a nineteenth-century traveler, “the dog is cruel and blood-thirsty—a gloomy egotist, cut off from all human intercourse.” Yet, it seems that the sometimes lovable creatures sometimes get the last laugh in koan literature when a poetic comment on the case suggests that monks, “Had to endure being mocked by howling dogs / Who, in the dead of night, started barking in the vacant hall.” When it comes to the matter of having Buddha-nature or not having it, one master claims that a dog “has a hundred thousand times more than a cat!”

Image credits: The Ox-herding pictures. In the tradition of Zen Buddhism, this series of ten images is used as an analogy for the stages of a practitioner’s progression towards, and of, Enlightenment. Inked by the 15th century Japanese Rinzai Zen monk Shubun. From Museum of Shokoku-ji Temple. Public domain via Wikimedia Commons.

Steven Heine is an authority on East Asian religion and society, especially the history of Zen Buddhism and its relation to culture in China and Japan. He has published two dozen books, including Like Cats and Dogs: Contesting the Mu Koan in Zen Buddhism, Dogen: Textual and Historical Studies, Did Dōgen Go to China?: What He Wrote and When He Wrote It, and White Collar Zen: Using Zen Principles to Overcome Obstacles and Achieve Your Career Goals.