Since 1980, the share of the US population that is foreign born has doubled, rising from just over 6% in 1980 to over 12% in 2010. Compounding this demographic shift, the share of the foreign born population of Mexican origin also doubled, leading to a quadrupling of the fraction of US residents who are immigrants from Mexico. The vast majority of recent migrants of Mexican origin living in the United States are thought to be undocumented leading to a contentious policy debate concerning the collateral consequences of this particular type of immigration.

Over the same time period, crime rates in cities across the United States have declined considerably, in many cases, reaching historic lows. While the aggregate time series suggests that increases in immigration from Mexico has had a protective effect on crime, public opinion has generally reached the opposite conclusion, with a majority of US natives indicating a belief that immigration is associated with increases in criminal activity.

Theory offers little guidance in sorting out the effect of either immigration generally or Mexican immigration specifically on crime. On the one hand, immigrants possess demographic characteristics which, in the general population, appear to be positively associated with crime. In particular, they are more likely to be young and male and have lower earnings than other US residents. Likewise, immigrants may have less attachment to the communities in which they live and have different risk profiles than natives. On the other hand, there is a multitude of evidence that immigrants are positively selected on the basis of ability, face higher costs of punishment and bring with them abundant social capital that is protective of participation in crime. 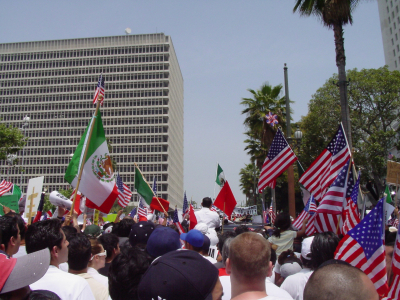 From an empirical standpoint, the relationship between immigration and crime is difficult to identify because just as immigrants may affect US crime rates, the presence or absence of criminal networks may have a corresponding pull on the level of immigration. Essentially immigration to US cities is hardly random. If we could transform the United States into a research laboratory, what we would like to be able to do is assign each US city a different number of migrants in each year and then observe what happens to that city’s crime rate. Such a research design is motivated by the concept of the randomized controlled trial in medicine – the idea that we can draw inferences about the efficacy of a treatment or a drug by randomly assigning patients to either take the drug or take a placebo pill. Since such an exercise is not feasible with respect to immigration, the next best thing is to find natural variation that closely approximates such an experiment.

In order to identify the effect of immigration on crime, my research leverages two empirical regularities with respect to Mexican immigration to the United States. First, migrants from a given Mexican state tend to settle in US cities that have longstanding cultural ties to that state. For example, migrants from states in eastern Mexico have tended to settle in cities in Texas and the Midwest. On the other hand, migrants from western Mexico have tended to settle in California. Second, migrants tend to be drawn disproportionately from regions of Mexico that are heavily reliant on agriculture. As a result, they are more likely to migrate to the United States in the aftermath of sufficiently extreme weather variation – in particular, extreme rainfall.

As it turns out, weather variation in different Mexican regions has implications for the magnitude of historical flows of migrants to US cities. In particular, US cities experience increases in Mexican migration when Mexican states to which they are culturally linked experience highly variable rainfall. Accordingly Mexican rainfall acts like a random assignment mechanism that assigns a different number of annual migrants to each US city.

When I examine the relationship between rainfall-induced Mexican migration and crime in US cities, I find little evidence of any relationship between the two variables. While these findings do not rule out the possibility that certain US cities experience crime that is disproportionately perpetrated by immigrants, any such effects would appear to be highly localized. This research contributes to a growing literature that finds little evidence of negative collateral consequences of immigration to the United States.

Aaron Chalfin is an Assistant Professor in the School of Criminal Justice at the University of Cincinnati. His current research examines the effect of police on crime and the extent to which there is a relationship between crime and unauthorized immigration. His past research has considered both the cost and deterrent effect of capital punishment, the relationship between unemployment and crime and the degree to which DNA evidence can be used to solve residential burglaries. He is the author of “What is the Contribution of Mexican Immigration to U.S. Crime Rates? Evidence from Rainfall Shocks in Mexico” (available to read for free for a limited time) in American Law and Economics Review.