Viennese composer Alban Berg played a major role in the transformation of serious music as it entered the modern period. He was also a skilled, analytic writer, whose essays, lectures, and polemics provide a unique perspective on classical music in transition. A new English edition of his Pro Mundo – Pro Domo. edited by Bryan R. Simms, contains 47 essays, many of which are little known and have not been previously available in English. Below is a brief extract from one of his dialogues with critic Julius Bistron. 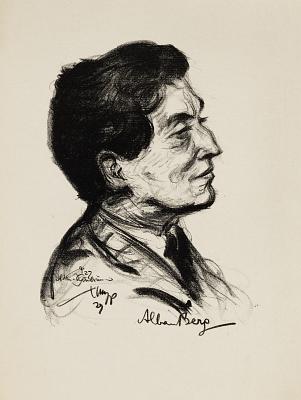 Alban Berg: You start, Professor, I’m happy to have the last word!

Bistron: You’re that sure of the matter?

Berg: As sure as a person can be about an issue in whose development and growth he has participated for a quarter century, with a certainty that comes not only from reason and experience but, even more, from belief.

Bistron: Good. It would probably be simplest if I first pose the title question of our dialogue: “What is atonal?”

Berg: It is not easy to answer this by a formula that could also serve as a definition. Where this expression was first used—apparently in a newspaper critique—it probably was, as the compound form of the term [a-tonal] clearly implies, a designation for music whose harmony did not comport with the traditional laws of tonality.

Bistron: So you mean in the beginning was the word, or, better, a word that compensates for the helplessness we feel when confronted with something new.

Berg: You might say that. But it is certain that this term “atonal” was used with a pejorative intention, just as terms like “arrhythmic,” “amelodic,” “asymmetric” were also used at this time. But while these borrowed terms were sometimes suitable as designations for specific phenomena, the word “atonal,” unfortunately I must say, served as a collective term for music that was assumed not only to lack relevance to a harmonic center, but also to have none of the other prerequisites of music, such as melody, rhythmic, formal divisibility into large and small. So the term “atonal” today really means as much as something that is not music, nonmusic, in fact something that is quite the opposite of what has always been understood as music.

Bistron: Aha, a term of reproach! And I see it as a valid one. So you’re saying, Mr. Berg, that there is no such contradiction and the lack of reference to a definite tonic does not actually shake the whole edifice of music?

Berg: Before I answer that question, Professor, let me put this forward: if this so-called atonal music cannot be related in harmonic terms to a major or minor scale—and after all there was music before the existence of this harmonic system— …

Bistron: … and what beautiful, artful, and imaginative music …

Berg: … it doesn’t follow that in the “atonal” artworks of the last quarter century, at least as regards the chromatic scale and the new chords derived from it, there cannot be found a harmonic center, although this, of course, is not identical to the concept of the old tonic. Even if this has not yet been brought into the form of a systematic theory.

Bistron: Oh, I find this reservation to be unjustified. The chromatic scale also follows a rule and comes from nature just as legitimately as the diatonic scale that was worked out earlier with simpler numbers—perhaps even more so. I believe I’m close to proving this.

Berg: All the better! But regardless of this, with “composition with twelve-tones related only one to another,” which Schoenberg first put into practice, we already have a system that in no way lags behind the older teaching of harmony in its regularity and cohesiveness of material.

Bistron: You mean the so-called twelve-tone rows? Would you like to speak about them further?

Berg: Not just now, Professor. Th at would lead us too far afield. Let’s just talk about the concept “atonal.”

Bistron: Certainly. But you still haven’t answered my earlier question: whether there is not in fact a contradiction between traditional music and the music of today and whether the renunciation of relation to a tonic does not in fact make the entire edifice of music totter.

Berg: I can answer your questions more easily by starting where we have found agreement—that the rejection of major and minor tonality in no way produces harmonic anarchy. Even if a few harmonic resources are lost along with major and minor, all of the other prerequisites of “serious” music are preserved.

Berg: It is not enough just to tick them off without going into the matter further. Indeed, I must do so, because it is a question of showing that the concept of atonality, which related at f rst solely to harmony, has now become, as I said, a collective term for “nonmusic.”

Bistron: Nonmusic? I find this description too strong—I have never heard it before. I believe that the opponents of atonal sonorities want to stress the antithesis with so-called beautiful music.

Berg: As far as I’m concerned, that’s what it suggests. In any event, this collective term is intended to deny everything that makes up the content of music until now. I have already mentioned the words “arrhythmic,” “amelodic,” “asymmetric,” and I could cite a dozen more terms used to dismiss modern music, like cacophony or test-tube music, which have already partially faded from memory, or new ones like linearity, constructivism, New Objectivity, polytonality, machine music, etc. These may have relevance in certain specific cases, but they are all now brought together under a single umbrella in the phony notion of “atonal” music. The opponents of this music hold to it with great persistence so as to have a single term to dismiss all of new music by denying, as I said, the presence of what until now has made up music and thus to deny its justification for existing.

Bistron: You may be seeing things too darkly, Mr. Berg! Perhaps what you say may have been the case until not too long ago. But today people know that atonal music in and of itself can be engaging and in certain cases will be so. In cases that are truly artistic! It is only a matter of showing whether atonal music can really be called music in that same sense as with earlier works. That is, whether, as you say, only the harmonic basis of new music has been changed, with all other elements of traditional music still present.

Berg: And I do hold this and can prove it in every measure of a modern score. Prove it above all—to start with the most serious objection—by showing that this new music, as with traditional music, rests on motive, theme, main voice, and, in a word, melody, and that it progresses in just the same way as does all other good music.

Bistron: Well, is melody in the normal sense really possible in this atonal music?

Berg: Of course it is! Even, as is most often disputed, cantabile and songful melody.

Bistron: Now as concerns song, Mr. Berg, atonal music travels on new paths. Here there are certainly things not heard before, I would almost say things that seem at present to be outlandish.

Berg: But only in harmonic rudiments—there we are in agreement.

Bryan R. Simms is the editor of Pro Mundo – Pro Domo: The Writings of Alban Berg. He is Professor in the Thornton School of Music at the University of Southern California. He was formerly editor of the Journal of Music Theory and Music Theory Spectrum, and he has served on the Council of the American Musicological Society and Executive Board of the Society for Music Theory.