By Richard A. Bailey

“In the name of God, Amen. We whose names are under-written, the loyal subjects of our dread sovereign Lord, King James, by the grace of God, of Great Britain, France, and Ireland King, Defender of the Faith, etc.

Having undertaken, for the glory of God, and advancement of the Christian faith, and honor of our King and Country, a voyage to plant the first colony in the northern parts of Virginia, do by these presents solemnly and mutually, in the presence of God, and one of another, covenant and combine our selves together into a civil body politic, for our better ordering and preservation and furtherance of the ends aforesaid; and by virtue hereof to enact, constitute, and frame such just and equal laws, ordinances, acts, constitutions and offices, from time to time, as shall be thought most meet and convenient for the general good of the Colony, unto which we promise all due submission and obedience. In witness whereof we have hereunder subscribed our names at Cape Cod, the eleventh of November in the year of the reign of our sovereign lord, King James, of England, France, and Ireland, the eighteenth, and of Scotland the fifty-fourth. Anno Dom. 1620.”

When the Mayflower—packed with 102 English men, women, and children—set out from Plymouth, England, on 6 September 1620, little did these Pilgrims know that sixty-five days later they would find themselves not only some 3,000 miles from their planned point of disembarkation but also pressed to pen the above words as the governing document for their fledgling settlement, Plimouth Plantation. Signed by 41 of the 50 adult males, the “Mayflower Compact” represented the type of covenant this particular strain of puritans believed could change the world. 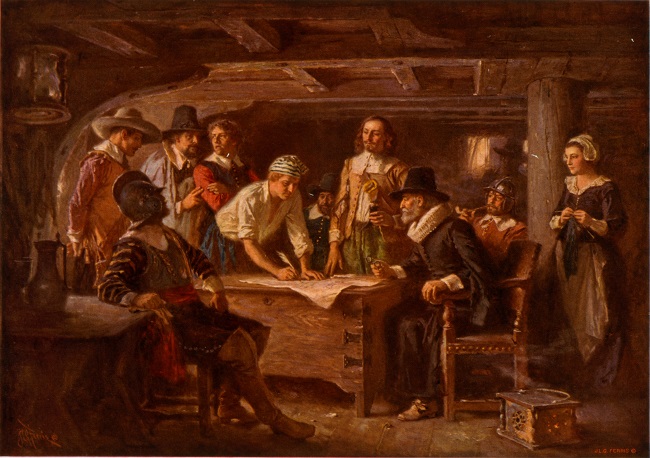 While they hoped to achieve success in the future, these signers were especially concerned with survival in the present. The lives of these Pilgrims for the two decades or so prior to the launching of the Mayflower had been characterized by Separatism. Their decision to separate from the Church of England as a way to protest and to purify what they saw as its shortcomings had led to the necessity of illegally emigrating from the country of England and seeking refuge in the Netherlands. A further separation was needed as these English families realized that the Netherlands offered neither the cultural nor economic opportunities they really desired. But returning to England was out of the question. Thus, in order to discover the religious freedom they desired, these Pilgrims needed to remove yet again, which became possible because of an agreement made with an English joint-stock company willing to pair “saints” and “strangers” in a colony in the American hemisphere.

Despite the fact that they were the ones who had recently arrived in North America, the Pilgrims taxed the abilities of both the land and its native peoples to sustain the newly arrived English. Such taxation became most visible at moments of violent conflict between colonists and Native Americans, as in 1623 when Pilgrims massacred a group of Indians living at Wessagussett. Following the attack, John Robinson, a Pilgrim pastor still in the Netherlands, wrote a letter to William Bradford, Plimouth’s governor, expressing his fears with the following words: “It is also a thing more glorious, in men’s eyes, than pleasing in God’s or convenient to Christians, to be a terrour to poor barbarous people. And indeed I am afraid lest, by these occasions, others should be drawn to affect a kind of ruffling course in the world.” As his letter makes clear, Robinson clearly hoped the colonists would offer the indigenous peoples of New England the prospect of redemption–spiritually and culturally–rather than the edge of a sword. The Wessagussett affair, however, illustrated such redemption had not been realized. From at least that moment on, relationships between English colonists and the indigenous peoples of North America more often than not followed ruffling courses.

While an established state church isn’t a main threat nearly 400 years later, some of the Pilgrims’ concerns still haunt many Americans. Like those English colonists preparing to set foot on North American soil, we remain afraid of those we perceive as different than us–culturally, racially, ethnically, and the like. But the tables are turned. We are now the ones striving to protect ourselves from a stream of illegal and “undocumented” immigrants attempting to pursue their dreams in a new land. Our primary method of protection? Separatism. Like the Pilgrims we often remain unwilling to welcome those we define as different. We’ll look to them for assistance when necessary, rely on their labor when convenient, take advantage of their needs when possible, but we won’t welcome them as neighbors and equals in any real sense nor do we seek to provide reconciliation and redemption to people eager to embrace the potential future they see among us.

Ruffled courses persist as the United States wrestles with how it ought to treat those men, women, and children who, like the Pilgrims of the seventeenth century, are looking for newfound opportunities. As we remember the voyage of the seventeenth-century immigrants who departed England on 6 September 1620 and recall their many successful efforts to establish a lasting settlement in a distant land, we do well to celebrate not only their need to separate but also their dedication to “covenant and combine [them]selves together into a civil body politic.” The world has enough ruffling courses and perhaps needs the purifying reform modeled by the Pilgrims and the potential redemption those like John Robinson hoped for as they agreed to work together for the common good. In short, one would hope that a people whose history was migration from another land would be more welcoming than we often are, especially in our dealings with the immigrants and the impending immigration reform of our own day.

Richard A. Bailey is Associate Professor of History at Canisius College. He is the author of Race and Redemption in Puritan New England. His current research focuses on western Massachusetts as an intersection of empires in the eighteenth-century Atlantic world, fly fishing in colonial America, and the concept of friendship in the life and writings of Wendell Berry. You can find Richard on Twitter @richardabailey

The three greatest myths of the Fall of Tenochtitlán