We are living through a very significant historical change: the collapse of the historic churches which have shaped British society and culture. The Church of England, by law established, is no exception. A survey I recently carried out with YouGov for the Westminster Faith Debates (June 2013) shows tha  in Great Britain as a whole only 11% of young people in their twenties now call themselves CofE or Anglican, compared to nearer half of over-70s. The challenge facing the new Archbishop of Canterbury, Justin Welby, is to address this decline. But the initial indications suggest he may be heading in the wrong direction. Consider the Archbishop’s recent criticisms of Wonga and other payday loan providers. Most commentators were positive. Welby braved the revelation that the Church had a small investment in Wonga, took advantage of the media coverage, and managed to highlight an important issue. This is remarkable given that he didn’t have any serious initiative to announce for the Church doesn’t have the wherewithal to set up the credit unions of which he spoke so favourably. Here, it seems, is a churchman with something to say, the ability to say it in a comprehensible fashion, and the courage to stand up for social justice. So what’s the problem?

Providing care for the poorest in society was, historically, part of the Church’s business. In the mid-twentieth century it happily joined forces with the state to nationalise this work. When the Thatcher government started to challenge the welfare consensus, the Church of England was quick to leap to the defence of the poor. Its 1985 report Faith in the City greatly irritated Mrs Thatcher, just as Mrs Thatcher’s ‘Sermon on the Mound’ greatly irritated the clergy.

I was near the heart of all this, straight out of university to my first job teaching in an Anglican theological college (seminary). In the wake of Faith in the City it had been decreed that the students should be bundled off to “urban priority areas” to “get alongside the poor,” and win their clerical spurs. Despite good intentions, I found the whole thing patronising and economically naïve. Quite a lot of “the poor” didn’t seem to want to be got alongside. There was also a very obvious set of gender biases; the ideas were still of male clergy supporting working-class men. And the underpinning thinking was long on wealth distribution, short on wealth creation.

Fast forward to the last Archbishop, Rowan Williams, a self-confessed “beardy leftie.” Under his benevolent rule, the Church’s focus on the poor and social justice remained remarkably similar to that of the 1980s, despite the fact that the category of “the poor” had by this time become highly problematic. So when Rowan William’s successor immediately turned his attention to ‘the poorest in society’, I heard the same old record going round. 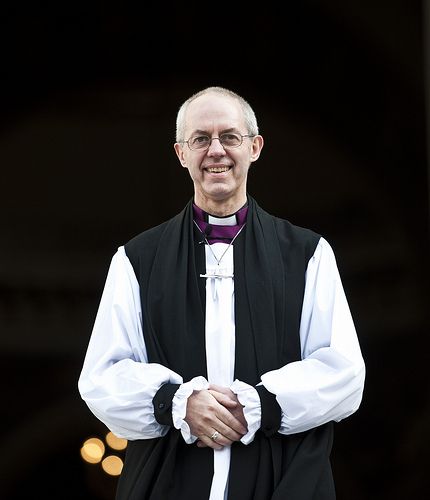 The stuck-ness is concerning. What’s  worse is that this set of priorities is now strikingly out of step with the views of a majority of Anglicans, not to mention a majority of the British people. My YouGov poll finds that, even after correcting for age, most Anglicans fall on the ‘free market’ (in favour of individual enterprise) rather than the ‘social welfare’ (in favour of welfare and state interventions) side of the political-values scale. Indeed, Anglicans are more tilted in that direction than the general population of the UK, even though the latter is also tilted towards ‘free market’ values. For example, just under half of all Anglicans, churchgoing or not, think that Mrs Thatcher did more good for Britain than Tony Blair, compared with 38% of the general population (16% of Anglicans think Tony Blair did more good, compared with 18% of the general population). And nearly 70% of Anglicans believe that the welfare system has created a culture of dependency, which is almost 10 percentage points more than the general population.

But the real killer for the Church of England is that most people, including most Anglicans, are also out of step with official teaching on other issues of justice and fairness — most notably the Church’s policies towards women and gay people. To give him his due, the new Archbishop has spoken strongly in favour of women bishops. But one of his earliest contributions to public life, even before Wonga, was to speak out strongly in the House of Lords against the legislation to allow gay marriage.  Although he claimed that a majority of Anglicans are strongly opposed to this change, our poll shows that, on the contrary, Anglicans are now in favour of the proposed legislation by a small margin — as is the country as a whole, including most overwhelmingly younger people. My survey asked under-25s with negative views about the church why they held those views. Not surprisingly, the most common answer was: “The Church of England is too prejudiced – it discriminates against women and gay people.”

The problem which Justin Welby has to face is that you can’t claim to be pro justice for some – “the poor” – but not others – women and gay people. And since personal morality is the church’s core business in a way welfare provision is not, those who still know their Bible may find a verse from Matthew springing to mind: “Why beholdest thou the mote that is in thy brother’s eye, but considerest not the beam that is in thine own eye?”

Linda Woodhead is Professor of Sociology of Religion at Lancaster University. She co-organises the Westminster Faith Debates (for public debate on religion), which are funded by the ESRC and AHRC, and which supported the YouGov poll cited here. She is the author of Christianity: A Very Short Introduction. Follow @LindaWoodhead on Twitter.