As the summer of 1963 drew to a close and students prepared to return to school, the Beatles released what may have been their most successful single. “She Loves You” would top the British charts twice that year, remain near the top for months, and help to launch the band into the American consciousness. Some of their other singles would remain at the top longer, but few would have the lasting cultural impact of this disc. 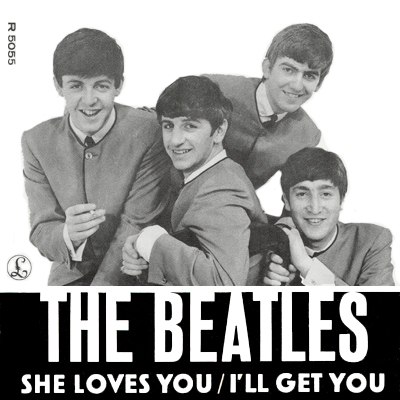 With the success of “From Me to You” in British charts (followed almost immediately by Billy J Kramer’s version of Lennon and McCartney’s “Do You Want to Know a Secret”), the Beatles began thinking about their next recording. “Love Me Do” started the year in the top 20, “Please Please Me” climbed to the top five, and “From Me to You” undeniably sat at the top for several weeks. For Lennon and McCartney, the challenge seemed to be how to perfect a model that had worked so well with the previous songs. Personal pronouns? Check. Up-tempo optimism? Check. Vocal harmonies? Check. Repeated song hook? Check. Stopping the song with punctuating chords? Check. Isley Brothers’ “ooo” performed while shaking heads? Check. All of these devices (and a few others) had been successful in their songs and performances in 1963. The trick would be to make it all sound new again and to provide something that they could perform live. What they created may be the ultimate example of how the Beatles contributed to the creation of Beatlemania. Indeed, McCartney has described “She Loves You” as “custom-built for the record we had to make.”

Newcastle, 26 June 1963. Like so many touring musicians, Lennon and McCartney found themselves stuck in a hotel room with little to do; but, with a looming recording session, they set to work on a song. Their inspiration may have been a tune written by London songwriter and producer Tony Hatch that American Bobby Rydell had recorded and that had achieved modest success on British charts. “Forget Him” follows the familiar model of songs that complain in the first person to a former lover that the new lover will never offer what the author could. McCartney would take this conceit one step further by making the singer an observer of a relationship who conveys a “message” from one lover to the other.

The choice of the words “yeah, yeah, yeah” also carried an obvious coded ideological meaning for younger fans. When the songwriters returned to McCartney’s Liverpool home the day after Newcastle and played their new creation for his father, he complained about the distinctly American flavor of the language, instead preferring “yes, yes, yes.” In a context where the Beatles’ primary audience (teens) sought to distinguish themselves from their parents and their parents’ generation, the simple use of language could prove a subtle and effective marker. “Yeah, yeah, yeah” evoked both rebellion and an innocence of teen infatuation that parents might protest, but could not ban, especially coming as it did in the context of a song. They might correct their children’s speech, but the words to a song were a kind of excusable poetic extravagance.

The core musical model lies in the responsorial structure of rhythm-and-blues and gospel. McCartney has described beginning “She Loves You” as an “answering” song, meaning that someone would sing “she loves you,” to which “the others would do the ‘yeah, yeah, yeah’ lines…”

London, 1 July 1963. Lennon and McCartney apparently arrived at EMI with some well-formed ideas about how they wanted the band to perform “She Loves You,” a remarkable accomplishment given how touring afforded them little time to prepare. When the songwriters played the song for Harrison and Starr in studio two on this Monday (five days after they had written it), the bandmates quickly reacted by inventing musical responses. All of this speaks to a major change in how they prepared for recording. With “Love Me Do” and “Please Please Me,” they had already included the music in their stage performance so that when they arrived at the studio, they knew their parts and had established appropriate roles. Now, Lennon and McCartney needed to anticipate how Harrison and Starr might contribute in order to expedite the recording process. They certainly allowed their bandmates flexibility in how they might articulate their musical contributions with the assured knowledge that what they created would be perfect — but they also would have given them parameters.

The entire session bubbles with self-confidence and enthusiasm. A well-crafted song requires a convincing performance to be successful and the Beatles deliver “She Loves You” with enough energy to illuminate London. The opening drums of the performance almost burst through the speakers and grab the listener by the chest, eschewing the cymbals for toms that pound like an imminent heart attack. Not to be outdone, the vocals race with adrenaline through the microphone cables, the singers perhaps reacting to the fans that had invaded the sanctity of EMI’s Abbey Road recording facilities this day, overwhelming the staid security, racing through the halls, and briefly penetrating even studio two.

23 August 1963. British reviewers generally expressed disappointment with the release. David Jacobs complained that he found “the new Beatles record rather disappointing” and fellow disc jockey Brian Matthew complained that “She Loves You” was “the first Beatles record that hasn’t knocked me out.” Matthew projected that the band “rested far too much on the success they’ve already had” and that this release fell “far short of their other discs.” Reviewer Don Nicholl similarly complained “what a pity it is to waste such energy and rhythmic enthusiasm on such an ordinary song. The lyric is feeble and unimaginative.” Nevertheless, all agreed that “She Loves You” would be a hit. They were right about that assessment.

Image credit: Cover art for the single “She Loves You” by The Beatles. (c) Parlophone. Used for the purposes of illustration. Via Wikimedia Commons.