Not only does Will and Kate’s royal wee one now have an ASDA parking spot, there’s another nice surprise awaiting his or her arrival: a specially-composed lullaby, called “Sleep On”. It’s a sweet little tune, written by Welsh composer Paul Mealor (who also wrote music for the couple’s wedding) with lyrics by Brendan Graham. The song is included on Hayley Westenra’s latest album, a collection of lullabies called Hushabye.

While a lullaby’s lyrics often “instill cultural values” and/or “incorporate the fears of the parent” (as the Grove definition puts it), musically speaking lullabies are characterized by quietude and simplicity. Indulge me while I expound upon some of the song’s more charming features: 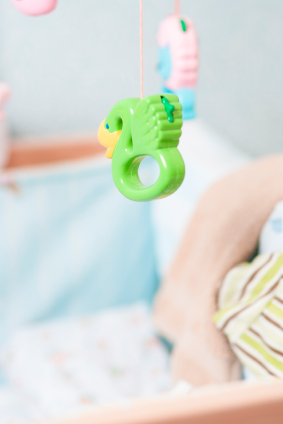 Instruments
Certainly a lullaby—at least, one that’s truly intended to soothe a baby to sleep—is no time to be innovative, and so we have a very expected group of instruments playing, all of which can produce a gentle timbre. A harp plays throughout, while bowed violins and a pizzicato double bass fill out the sound; a flute adds variety to the second verse. By way of contrast, just imagine if the song had been recorded using a group of electric guitars using distortion pedals!

Vocal Melody
The melody is pleasantly balanced, the verse notes falling mostly downwards, the chorus notes rising mostly upwards until the little phrase at the end where it falls back down again. The overall phrase structure is also perfectly symmetrical, as the time it takes to get to “sleep”, “keep”, “strong”, and “long” in the first verse and chorus is four bars of 3/4 each.

Harmonies
Could it get any simpler? The song employs only three chords, which are also the most “stable” chords within the key – consonant chords that communicate comfort. In roman numeral terms, the song moves between I, IV and V; or, in the key of B-flat major, B-flat, E-flat and F. Here’s a little video of me demonstrating a condensed version of the song’s chord pattern on the guitar (please excuse my clumsy picking):

Something that I don’t demonstrate in the video (mainly because I don’t know how to play it on the guitar) is the nice little change in the bass line that happen on the words “strong” and “long” in the chorus, where the note “A” is played where “F” usually goes. For a brief moment this makes the bass line smoother (a step instead of a leap between the notes), and, as the leading tone of B-flat major, it also pull us irresistibly “home” to the main note of the key.

For me, the allure of the lullaby is the elusive promise of a deep, uninterrupted night of sleep, from which you wake refreshed and in love with the world. Here’s hoping that, sooner rather than later, for Kate’s sake at least, that the new baby learns how to “sleep on” through the night.

P.S. For fun have a listen to this lullaby-afied Ramones song:

Image credit: child cradle with toys hanging around, shot with a very shallow depth of field. © dimamorgan12 via iStockphoto.