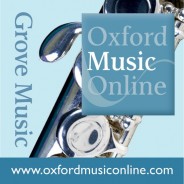 The centenary of the 29 May 1913 premiere of Igor Stravinsky’s The Rite of Spring is being celebrated by numerous orchestras and ballet companies this year, which is always worth mentioning when that first performance incited a riot. The ballet (also performed as an orchestra piece) depicts a collection of pagan spring rituals involving fortune telling, holy processions, and culminating in l’élue (the elected one) dancing herself to death. It was not the subject matter but the music and choreography that upset that first audience 100 years ago. Indeed, according to this interview with Stravinsky, even during the compositional process the composer was upsetting people, namely his collaborators:

It’s clear from the video that Stravinsky knew how uncommon-sounding and challenging the work would be for his listeners. He also seemed delightfully aware of the piece’s significance for the story of Western art music. The eight-note chord is “new,” and the accents are “even more new.” New how? Taking into consideration Stravinsky’s education (the musical part, not the law school part) and the cultural milieu in which he placed himself, it’s safe to say he was thinking in terms of the circa 250 year old Western European tonal tradition when he used the word “new.” The eight note chord was new because it eschewed the traditionally three or four note construction of tonal chords. 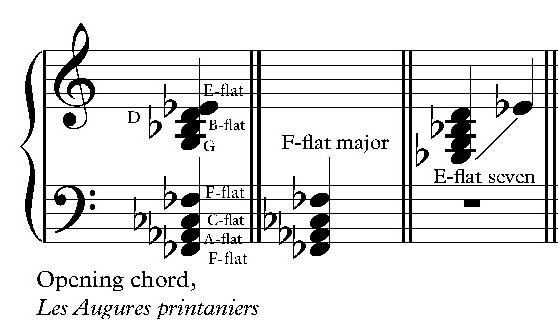 The chord that Stravinsky plays in the video is notated above (the chord is the left-most one in the example). By taking two traditionally constructed chords, F-flat major and E-flat seven, and stacking them on top of each other, he has created a polychord that has a much more complex sound than either of the two chords as heard separately.

The accents were “even more new” because they disrupted the metrical norms of the tonal style (in which the strongest beat happens at the beginning of the measure) by rendering the beat uneven.

Traditionally, accents denote the beginning of a measure that contains a recurring number of beats; it’s part of how we mentally divide up time when we play or listen to music. As you can see in the example above, Stravinsky disrupts that regularity by essentially restarting the beat-division at unusual points in the measure (I’ve tried to demonstrate this by numbering the eighth notes).

What’s interesting is that Stravinsky’s polychords and persistent syncopating of the beat weren’t actually the newest “new” sounds around at the time of Rite’s premiere. A group of Austrians were already composing music that disregarded tonality and meter altogether. Nevertheless, Stravinsky’s music deviated sufficiently from tonal norms for it to sound somewhat shocking to his first listeners.

Today The Rite of Spring still sounds new, even to someone like me who spends so much time listening to recently composed, avant garde music. If you haven’t heard the piece, I highly recommend doing so (perhaps this recording from jazz trio The Bad Plus will spark your interest); better yet, see it live if you can. And no need to worry, it’s been nearly a century since it caused a riot.