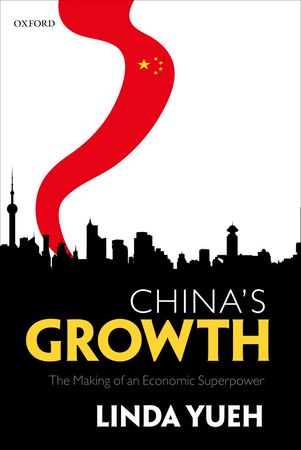 Linda Yueh will be appearing at The Telegraph Hay Festival on Sunday 26 May 2013 at 5.30 p.m. to examine China’s growth and the making of an economic superpower. More information and tickets.

China has successfully utilised inward foreign direct investment (FDI) to “catch up” in growth by using foreign investment to help develop manufacturing and export capacity. The next phase requires technological progress and thus will involve outward FDI, including its firms’ “going global.” The “going out, bringing in” policy means that its “open door” policy has been supplemented by the “going out” of its firms as well as “pulling in” FDI. This is a key part of China’s future growth; that is dependent on the ability to produce globally competitive corporations that will help China move up the value chain and sustain its development and overcome the “middle income country trap”. This refers to how countries slow down after reaching about $14,000 per capita – the level that China is forecast to reach before 2020. Thus, the next phase of growth will be characterised by a shift in its growth paradigm and centre on global integration characterised by outward investment as China takes its place as a burgeoning economic superpower. It also has macroeconomic benefits in reducing foreign reserve accumulation from its record $3.44 trillion by buying more real assets instead of government bonds to balance its current account surplus. China has worried about the value of its holdings with Western economies struggling in the aftermath of the 2008 global financial crisis and the ongoing euro debt crisis. Thus, China has also launched a policy to internationalize the RMB, increasing the use of the Chinese currency internationally, via offshore centres to allow gradual capital or financial account liberalisation. That ambition to develop the RMB, plus the aim to invest rather than buy government debt, will fundamentally transform China’s impact on the global economy.

These are the key steps toward an inevitable structural shift in the economy – both the external sector and also re-orienting more toward domestic demand. These were highlighted in the major policy document of the 12th Five Year Plan (2011-2015) as well as in the World Bank and China’s State Council Development Research Centre’s “China 2030” report, both of which I served as an advisor on.

Re-balancing growth
Re-balancing growth will add to China’s stability and allow it to become more like the structure of the only economy in the world larger than China’s. America is one of the world’s top three traders, but its economy is largely driven by domestic demand. China, too, can become a large, open economy. China would gain greater stability and a more sustainable basis for its future growth if it continues to be globally integrated, but be less subject to the volatility that plagues small, open economies such as those in Asia.

To orient toward domestic demand means boosting consumption in China, i.e. reducing the savings tendencies of households and firms. Consumption fell from around half of GDP in the 1980s and early 1990s to nearly one-third by the late 2000s. In developed economies, consumption is typically between half to two-thirds of GDP.

For Chinese households, precautionary savings motives are important to address, particularly in rural areas. There has also been an increase in savings by firms (state-owned and non-state-owned) during the 2000s where firm savings have rivalled that of households. The reason is thought to be because China’s distorted financial system is biased toward state-owned enterprises (SOEs), and private firms have trouble obtaining credit—whether from banks or the underdeveloped domestic capital markets.

Going global
China also recognizes that its growth will slow in the coming decades, and it is wary of falling into the “middle income country trap”. It therefore wants to upgrade technologically, have globally competitive firms and sponsor greater innovation, which requires having firms that operate, compete and learn in developed markets. This is a trait shared by those countries that have joined the ranks of rich nations, such as Japan, South Korea and others – and China is keen to do the same.

Plus, China has been aiming for some time to diversify out of U.S. Treasury bonds due to worries about the American fiscal position. But, the euro debt crisis has also raised concerns about the eurozone. Thus, the recent thrust of Chinese policy has been to use foreign exchange reserves to finance investments by Chinese companies overseas instead of acquiring more government debt.

There has been exponential growth of outward FDI since the mid 2000s when the first commercial investment by a Chinese firm was permitted in 2004 with TCL’s purchase of France’s Thomson. By last year, China reported that it had invested a record $117 billion overseas. China is aiming to show that its industrial capacity is not only a function of foreign firms producing its exports, but indicative of a more widespread upgrading of its industry.

China’s changing impact on the world
China can become a large, open economy – developing domestic demand and upgrading industry/promoting globally competitive firms – that recognises its wider impact as it is unlike small, open, export-led economies. China already does and will increasingly do so as it promotes outward investment, the internationalisation of the RMB and the gradual opening of its capital account. With per capita incomes still only at $9,100, there is significant scope for China to continue to grow even though it ranks as the world’s second largest economy. The Chinese government has a 30 year plan that hinges on these components that will undoubtedly transform the world economy in a fundamentally different manner than the past impact via cheap manufactured goods. The new trends will involve the rise of the RMB as a reserve currency, competitive Chinese multinationals and greater opening of the mainland market. Most importantly, successfully re-balancing China will mean a more sustainable growth path for China and perhaps the world economy.

Dr. Linda Yueh is Director of the China Growth Centre and Fellow in Economics, St Edmund Hall, University of Oxford, Adjunct Professor of Economics at the London Business School, and Visiting Professor of Economics at Peking University. She is the Chief Business Correspondent at the BBC and the host of a new weekly business programme on BBC World News. She is the author of several books, including two by Oxford University Press: China’s Growth: The Making of an Economic Superpower and Enterprising China: Business, Economic, and Legal Developments Since 1979. You can follow her on Twitter @lindayueh