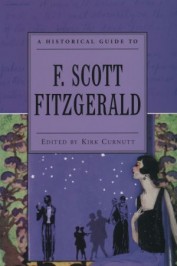 The build-up to the release of Baz Luhrmann’s frenetic, chromatic interpretation of The Great Gatsby was a wild ride for several of us who live and breathe F. Scott Fitzgerald daily. One minute you’re grading end-of-the semester papers, fighting the losing battle against the extinction of the apostrophe, the next you’re fielding phone calls from NPR or the Associated Press. The experience has been a whirlwind introduction to media relations. I’ve learned, for example, never to declare, “I’m a homer!” when asked my feelings about Fitzgerald over a static-crackling phone line. Mishearing will confuse even the best of reporters.

I’ll say unabashedly that the movie delighted me, as it did many scholars I admire, including such leading Fitzgerald folks as Jackson R. Bryer, James L. W. West III, and Anne Margaret Daniel, as well as my writer pal Therese Anne Fowler, author of the current bestseller Z: A Novel of Zelda Fitzgerald. Frankly, any flick that can make Rex Reed’s pacemaker misfire is aces by me. And while I appreciate the objections of The New Yorker and Salon, I honestly think a razzle-dazzle, Adderall-induced Gatsby is what we need at this moment in time—or maybe what I need after so many years now of struggling to persuade students and other resisting readers that Fitzgerald’s lapidary prose isn’t “boring.” For whatever credibility it might cost me, I’m genuinely less interested in what David Denby or Peter Travers think than in watching general audiences dress up as flappers, slip on 3D glasses, and “fangirl” on Tumblr and Facebook. After all, I’ve been “fanboying” since long before I ever presumed to understand the novel.

That said, I was struck that, for all the familiar lines and symbols incorporated into Luhrmann and Craig Pearce’s screenplay, how many of my personal moments didn’t end up on the screen. After returning from a late-night sneak preview, I sat out by my pool (which, unlike Gatsby’s, has no monogram at the bottom) and reread the book for the zillionth time. If nothing else, the resulting list shows how inexhaustibly intricate The Great Gatsby is.

By 1925, Fitzgerald had already dedicated his first short-story collection, Flappers and Philosophers (1920), to his wife/muse, Zelda Sayre. Rather than simply repeat himself he crafted an elegantly metrical acknowledgment of her inspiration that has since become a poignant proclamation of how all roads in life led back to her: “Once Again to Zelda.” Gertrude Stein famously complimented the melody of the phrase, telling Fitzgerald, “[I]t shows that you have a background of beauty and tenderness and that is a comfort.” It’s since become one of the most quoted dedications in literature, providing Marlene Wagman-Geller a wonderful title for her 2008 study of “The Stories Behind Literature’s Most Intriguing Dedications.” I even borrowed the line for a recent reminiscence in The Southern Review on reading Nancy Milford’s biography Zelda in college.

9.  The “frosted wedding cake of the ceiling.”

When we first see Carey Mulligan as Daisy it’s amid the whip-cracking flutter of curtains at the Buchanans’ East Egg estate. These “pale flags” nearly suffocate Nick Carraway and viewers alike for a few seconds, giving us a sense of what it’s like to be swathed suddenly in opulence. Yet I’ve always been struck more by Fitzgerald’s clever description of the trim and plaster in this “rosy-colored room” as a decorated cake, a metaphor that glides by as smoothly and effortlessly as a spatula stroke of icing. It’s indicative of how finely detailed and sculpted even passing details are. Weirdly enough, Ernest Hemingway would rip off this line in his least graceful novel, To Have and Have Not (1937).

8. Myrtle Wilson’s change, in a single chapter, from crêpe-de-chine to muslin to chiffon.

In a book in which stacks of custom-made shirts can bring a woman to tears, every mention of fabric is a significant index of character texture. In Chapter II, Tom Buchanan’s mistress changes clothes three times in rapid succession as Fitzgerald dramatizes her hopelessly vulgar pretensions to style. From what I remember, Isla Fisher only sports two different outfits in her initial sequence with the adulterous Tom Buchanan, but the clothes are emphasized less than her Cupid’s bow lips and boop-boop-de-doop delivery (a slightly anachronistic nod to Betty Boop, who wasn’t born until 1930).

I burst out laughing when Eden Falk came on-screen with the silliest mustache this side of Matt Damon in True Grit. But the parvenu photographer Chester McKee is barely more than an extra in the movie and his most famous scene in the book is nowhere to be found. At the end of Chapter II, after an inebriated ellipsis, Nick discovers himself next to a bed where McKee is described as “sitting up between the sheets, clad in his underwear, with a great portfolio in his hands.” And while “great portfolio” is not a euphemism, the sudden appearance of underoos has launched a thousand seminar and book-club debates about Nick’s sexual leanings.

The first Gatsby party Nick attends is a stylistic tour-de-force of style and technique, with Fitzgerald employing synesthesia and tense shifts to dramatize the sensory dissociation of a wild time. My absolute favorite passage in the “blue gardens” interlude concerns the drunken chorus girl who sings as the revelry gives way to sleepy exhaustion. The singer brings herself to tears, causing her mascara run in rivulets. “A humorous suggestion was made that she sing the notes on her face,” Nick reports. Going into the movie, I was sure that staves and staffs would float off the 3D screen at me and that I would bathe in that tear. Alas.

Whole academic careers have been spent chasing down potential Long Island analogues for the social register Nick recites of “those who accepted Gatsby’s hospitality and paid him the subtle tribute of knowing nothing whatever about him.” Luhrmann does give us a Clarence Endive, but I missed Dr. Webster Civet, Willie Voltaire, the Smirkes, the Scullys, and Edgar Beaver, for whom I’ve always felt a pang of empathy: “[His] hair, they say, turned cotton-white one winter afternoon for no reason at all.”

Cars abound in the movie; the driving-into-Manhattan scenes are so fast and furious I kept expecting Vin Diesel to squeal into the frame. But while Luhrmann includes the drunken fender bender at the end of Gatsby’s first party, we don’t get the motif of bad driving as a symbol for moral irresponsibility. This is largely because in the book it’s staged between Nick and Jordan Baker, whose romance is excised from the movie. (As Jordan says, “It takes two to make an accident,” so as long as she sticks around careful people her own carelessness isn’t dangerous.)

Myrtle Wilson’s hit-and-run demise, meanwhile, has always posed a potential tonal turn into Pure Corn. Neither Shelly Winters in 1949 nor Karen Black in 1974 pulled it off. (Winters mainly because of a risible special effect). While in recent years YouTube has hosted a bizarre string of dangerous reenactment videos—made, one assumes as high-school English class projects—no director is likely to visualize the most gruesome image in Gatsby. Myrtle’s nearly severed breast, which dangles like the amputated car wheel in the fender bender scene. The disfigurement is indicative of the Jazz Age’s morbid fascination with the damage automobiles and new machine technologies in general could inflict on a human body.

3. Wolfsheim (or Wolfshiem, depending on your preference) skipping Gatsby’s funeral.

Among the most inventive of Luhrmann’s decisions is his casting of Bollywood legend Amitabh Bachchan as the man who fixed the 1919 World Series, a gangster based on Arnold Rothstein (newly rediscovered thanks to Boardwalk Empire). The casting is a clever way to sidestep the charges of anti-Semitism that dog the character. But the new Gatsby leaves out the gangster’s weaselly explanation for missing his protégé/front’s funeral (“When a man gets killed I never like to get mixed up in it”). The movie also avoids one of the strangest literary coincidences ever by not showing the name of Wolfsheim’s business, “The Swastika Holding Company.” Fitzgerald apparently chose this ancient symbol without knowing Adolf Hitler had adopted it for the Nazi Party in 1920.

In the final two pages, as Fitzgerald builds up to his “boats against the current” climax, he shows Nick erasing a dirty word scrawled by a trespasser on Gatsby’s immaculate white steps. Had Hemingway written Gatsby we’d have known exactly what that word was. At the very least, we’d have had the f—ks and c—s—rs he was forced to put in their place. (And Scribner’s wouldn’t even let him get away with c—s—r.) In his worst alcoholic stupors Fitzgerald reportedly rained down F- and C-bombs like artillery shells. Part of his charm, however, is that in his writing he was averse even to “violent innuendo,” much less the “obstetrical conversation” of the meretricious young men at Gatsby’s parties. Erasing the word is Nick’s way of keeping even the detritus of Gatsby’s dream in the polished state of his naiveté.

In the novel, Fitzgerald breaks up the backstory of Daisy Fay and Jay Gatsby’s 1917 romance into at least three separate flashbacks. The middle one concerns the apotheosizing kiss by which the penniless soldier “wed[s] his unutterable visions to her perishable breath”—a long, intricate passage full of stars and flowers that I’ve seen grown men weep over when read aloud. Later, however, we discover a description of Gatsby first “taking” Daisy out of less noble intentions (“He took what he could get, ravenously and unscrupulously—eventually he took Daisy one still October night, took her because he had no real right to touch her hand”), implying the intriguing possibility that the transformative kiss occurs after their first sexual encounter.

The chronology is vague, but the ambiguity reinforces a critical truism: The Great Gatsby isn’t a love story—it’s the story of American self-making. Yet Luhrmann depicts Gatsby as such a romantic naïf in his flashback scenes that true love seems his compelling motivation. Instead, for Fitzgerald, the romance merely validates his hero’s “Platonic conception of himself,” with Daisy a means to an end.

Luhrmann’s insistence that Gatsby is a “great, tragic love story”—a melodrama on the order of Gone With the Wind—is partly why he’s taking such a critical drubbing. But the paradoxes of Gatsby’s “colossal” delusion are probably too complex for a splashy movie, and I found the love story surprisingly affecting, especially the added moment when Daisy attempts to telephone Gatsby just as Wilson arrives to avenge Myrtle’s death. The scene made me empathize with Daisy emotionally rather than intellectualizing her predicament as the book leaves me to do. Maybe that’s the greatest benefit of pushing the romance angle: if a reinterpretation spares me from having to explain one more time why Jay Gatsby would fall for a ditzy “bitch goddess,” I’m down.

In the end, I’m glad we have a version that is controversial and divisive as opposed to the suffocating reverence of the 1974 Robert Redford/Mia Farrow snoozefest, which makes the Jazz Age seems about as fun and dangerous as a dinner with one’s parents. Perhaps I have low expectations for literature and reading at this point, but any version that stops audiences from using “dull” and The Great Gatsby in the same sentence is performing a public service for me. On my way out of the sneak preview I overheard an excited teenage girl declare, “I didn’t cry this much at the end of Titanic.”

Kirk Curnutt is professor and chair of English at Troy University’s Montgomery, Alabama, campus, where Scott Fitzgerald met Zelda Sayre in 1918. His publications include 'A Historical Guide to F. Scott Fitzgerald' (2004), the novels 'Breathing Out the Ghost' (2008), 'Dixie Noir' (2009), and 'Brian Wilson' (2012). He is currently at work on a reader’s guide to Ernest Hemingway’s 'To Have and Have Not'.

“The devil to pay” and more devilry