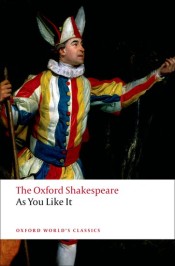 Since today is April Fools’ Day, we wanted to take a look at some of the most famous fools in literature: those written by Shakespeare. Below is just a handful of Shakespearean fools from a selection of his tragedies, comedies, and more. Who are your favourite Shakespearean fools? Let us know in the comments.

Feste, Twelfth Night, or What You Will
“Many a good hanging prevents a bad marriage.”

Feste is a fool for the Countess Olivia and seems to have been attached to the household for some time, as a “fool that the Lady Olivia’s father took much delight in”. Feste claims that he wears “not motley” in his brain, so even though he dresses the part of the fool, he is not an idiot, and can see through the other characters. Indeed, there are times when he appears almost omnipresent, knowing more about Viola/Cesario’s disguise than he lets on. Certainly, he seems to leave Olivia’s house and return at his desire a little too freely for a servant, weaving in and out of the action with the sort of impunity reserved for a person nobody took seriously. He is referred to by name only once during the play, otherwise he is addressed only as “Fool,” while in the stage directions he is mentioned as “Clown.”

Touchstone, As You Like It
“The more pity, that fools may not speak wisely what wise men do foolishly.”

Touchstone is Duke Frederick’s court jester, notable for his quick wit. He is an observer of human nature, and comments on the other characters throughout the play, contributing to a better understanding of the action. Touchstone is a clever and somewhat cynical fool, although, it is referenced often in the text that he is a “natural” fool (“Fortune makes Nature’s natural the cutter-off of Nature’s wit” and “hath sent this natural for our whetstone”).

The Gravediggers, Hamlet
“What is he that builds stronger than either the mason, the shipwright, or the carpenter?”

The Gravediggers (or Clowns) appear briefly in Hamlet, making their one and only appearance at the beginning of the first scene of Act V. We meet them as they dig a grave for the recently drowned Ophelia, discussing whether she deserves a Christian burial after having killed herself. Many major themes of the play are brought up by the Gravediggers in the short time they are on stage, but they use often dark humour to examine them, contrary to the rest of the tragic play.

Nick Bottom, A Midsummer Night’s Dream
“This is to make an ass of me, to fright me if they could.”

Bottom provides comic relief throughout A Midsummer Night’s Dream, and is probably most famous for having his head transformed into that of an ass. He is a member of The Mechanicals, who are rehearsing a play, ‘Pyramus and Thisbe’, in the hope of performing it on Duke Theseus’s wedding day. Puck, a fairy, finds them in the woods rehearsing and decides to play tricks of them, such as the aforementioned transformation of Bottom’s head. The Fairy Queen, Titania, falls in love with him thanks to a potion created by her jealous husband Oberon. Later, once Titania has had the potion removed, and Puck is made to lift the ass’s head spell, Bottom wakes in a field wondering whether it was indeed a dream or not. In terms of performance, Bottom, like Horatio in Hamlet, is the only major part that can’t be doubled, meaning that the actor who plays him cannot play another character within the same play, since Bottom is present in scenes involving nearly every character

The Fool, King Lear
“Thou shouldst not have been old till thou hadst been wise”

The relationship between Lear and his Fool is founded on friendship and dependency. The Fool commentates on events and points out the truths which are either missed or ignored. When Lear banishes Cordelia, the Fool is upset, but rather than leave the ridiculous King, the Fool accompanies him on his way to madness. The Fool realises that the only true madness is to recognize this world as rational.

Trinculo, The Tempest
“I shall laugh myself to death at this puppy-headed
monster. A most scurvy monster!”

Trinculo is Alonso’s servant, a drunken jester who provides plenty of comic relief throughout the play. Caliban takes an instant dislike to him and his drunken insults. However, Trinculo becomes part of Caliban’s plan to murder Prospero which ultimately fails.