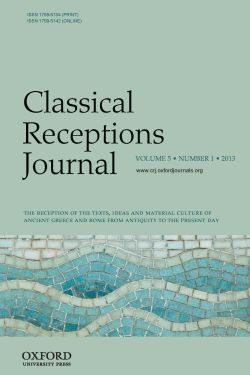 By Fiona Cox and Elena Theodorakopoulos


When George Steiner was musing in 2002 (in his review of Logue’s War Music) on the shapes and forms that responses to Homer seemed likely to take in the new millennium, he welcomed the work of Louise Glück and Jorie Graham as the first shoots of a female reworking of Homer. In Glück’s Meadowlands (1998) we find a lyric Odyssey in the depiction of a modern marriage disintegrating, while in The End of Beauty (1987) Graham’s Penelope delights in unravelling and thereby deconstructing earlier poetic forms. The fact that both writers draw on the Odyssey rather than the Iliad appears to lend substance to Samuel Butler’s conviction, remembered by Steiner, that the Odyssey is ‘woman’s work.’

In the last twenty years there has been an extraordinarily vital and widespread response to Homer by women writers. Many of these have been highly acclaimed – such as Laura Esquivel’s Like Water for Chocolate (1989) which transposes the myth of Penelope to early twentieth century Mexico, and Margaret Atwood’s Penelopiad (2005) which issues a challenge to Western culture for our wilful and persistent forgetting of the plight of Penelope’s hanged servant girls, the nameless collateral damage of the main story. Penelope’s maids are also remembered in Annie Leclerc’s Toi, Pénélope (2001), while the Welsh poet and dramatist Gwyneth Lewis’s A Hospital Odyssey (2010) resituates the Odyssey within a modern hospital, where an anxious wife joins the community of those Penelopes whose night-time vigils urge the return of their husbands from the world of the sick and dying.

The German poet Barbara Köhler describes her Niemands Frau: Gesänge (2007) as ‘another kind of translation, a reply, a response’ – and importantly one in which nothing is taken for granted in advance. There is ‘no predetermined exchange rate’, as she puts it. She begins with a direct challenge to the poetic voice of ‘Homer’. Using language in a way that undermines the conventions of German grammar and syntax, she opens her poem with a radical  deconstruction of the famous translation by Heinrich Voss (1781), taking apart not only the beginning of the Odyssey itself, but perhaps more importantly, the authority of the eighteenth century translator, who is still widely read in Germany. Explaining her approach, she points out how the scholars whom she describes as ‘wortmacthhaber’ (those who own the power of speech) and ‘sprachbeherrscher’ (masters of language), have made the Odyssey their own, and have excluded the voices of women writers as well as female characters.  Reread through the eyes of poets such as Köhler and others, long-standing traditions of viewing the Odyssey as a ‘feminine’ work, opposed to the more masculine tone and content of the Iliad, become destabilised.

It is important to remember that women have responded just as provocatively and as suggestively to the Iliad as they have to the Odyssey.  The most recent example is of course Madeline Miller’s The Song of Achilles which won the 2012 Orange Prize. But the twentieth century also saw Simone Weil speak in 1940 of the importance of understanding the Iliad during the Second World War, while Rachel Bespaloff published her response De l’Iliade in 1947. Moreover, when Monique Wittig first attempted to rework the Western tradition from a lesbian perspective, it was the Iliad that she chose to reclaim in Les Guérillères (1969). Earlier still, in 1935 Marguerite Yourcenar published a pair of lyrical prose poems under the title ‘Deux Amours d’Achille’ in 1935 (republished as part of Feux, 1936). In these pieces the story of  the Iliadic Achilles is refracted through the lens of later poetry and with a special focus on gender, eroticism and violence which we find again in Elizabeth Cook’s vivid prose-poem Achilles (2001).  Cook’s Achilles is characterised by a sensual, corporeal presence which finds its closest comparison in the ferocity of Christopher Logue’s translations in War Music (2002). Alice Oswald’s ‘excavation’ of the Iliad, Memorial (2011) remembers, often with devastating violence, the ordinary soldiers killed in the battle, and restores them to our memories in language that is haunted by the losses of more recent conflicts in Europe and the Middle East.

This list of writers is far from exhaustive, and could easily be replicated if one were to select a different classical author, such as Catullus, Virgil, or Ovid. Yet the unprecedented momentum with which women writers have taken charge of classical reception in the last two decades has been largely overlooked in academic circles. Authors studied in Classical Reception courses, or written about in the many excellent companions to classical literature still tend to be predominantly male, with names such as Ted Hughes, Michael Longley, Tony Harrison, Derek Walcott, and Seamus Heaney appearing with striking regularity. It is time for these names to be accompanied by a roll-call of women writers, who are making equally distinctive contributions.

In addition to those women engaging with Homer, one might consider the flowering of women’s translations/transgressions in the hands of Josephine Balmer, Eavan Boland, Anne Carson, Marie Darrieusecq, and Sarah Ruden. Or one might turn to the use of myth in postcolonial women’s writing, looking at the work of Toni Morrison, Lorna Goodison, Marina Carr or Linda Lê. One might examine the work of Carol Ann Duffy, Jeanette Winterson, Janet Lembke, and Ali Smith, all of whom draw on classical myth in order to alert us to the ecological threats hanging over us in the twenty-first century. And in undertaking such analyses we might re-evaluate our understanding of a classical tradition in which the voices and messages of women such as these have been unheard and unrecognised for so long.

Fiona Cox is a lecturer in French at the University of Exeter. Her most recent book is Sibylline Sisters: Virgil’s Presence in Contemporary Women’s Writing (OUP, 2011). Elena Theodorakopoulos is a lecturer in Classics at the University of Birmingham. Together, they are collaborating on a long-term project on contemporary women’s writing and classical reception. They have edited a special issue of Classical Receptions Journal, entitled ‘Translation, trangression, transformation: contemporary women authors and classical reception’. Thanks to funding from the British Academy, they have been talking to a number of women writers about their classically inspired works: the conversations will be available soon as a special issue of the open-access online journal Practitioners’ Voices in Classical Reception Studies.

Classical Receptions Journal covers all aspects of the reception of the texts and material culture of ancient Greece and Rome from antiquity to the present day. It aims to explore the relationships between transmission, interpretation, translation, transplantation, rewriting, redesigning and rethinking of Greek and Roman material in other contexts and cultures. It addresses the implications both for the receiving contexts and for the ancient, and compares different types of linguistic, textual and ideological interactions.