Charles Rosen, a titan of the music world, passed away on Sunday. He was a fine concert pianist, groundbreaking musicologist, and a thoughtful critic who wrote prolifically, including regular articles for the New York Review of Books, not just on music but on its broader cultural contexts. We’re excerpting his entry in Grove Music Online by Stanley Sadie below.


(b New York, 5 May 1927). American pianist and writer on music. He started piano lessons at the age of four and studied at the Juilliard School of Music between the ages of seven and 11. Then, until he was 17, he was a pupil of Moriz Rosenthal and Hedwig Kanner-Rosenthal, continuing under Kanner-Rosenthal for a further eight years. He also took theory and composition lessons with Karl Weigl. He studied at Princeton University, taking the BA (1947), MA (1949) and PhD (1951), in Romance languages. Some of his time there was spent in the study of mathematics; his wide interests also embrace philosophy, art and literature generally. After Princeton he had a spell in Paris, and a brief period of teaching modern languages at the Massachusetts Institute of Technology. But in the year of his doctorate he was launched on a pianist’s career, when he made his New York début and the first complete recording of Debussy’s Etudes. Since then he has played widely in the USA and Europe. He joined the music faculty of the State University of New York at Stony Brook in 1971.

As a pianist, Rosen is intense, severe and intellectual. His playing of Brahms and Schumann has been criticized for lack of expressive warmth; in music earlier and later he has won consistent praise. His performance of Bach’s Goldberg Variations is remarkable for its clarity, its vitality and its structural grasp; he has also recorded The Art of Fugue in performances of exceptional lucidity of texture. His Beethoven playing (he specializes in the late sonatas, particularly the Hammerklavier) is notable for its powerful rhythms and its unremitting intellectual force. In Debussy his attention is focussed rather on structural detail than on sensuous beauty. He is a distinguished interpreter of Schoenberg and Webern; he gave the première of Elliott Carter’s Concerto for piano and harpsichord (1961) and has recorded with Ralph Kirkpatrick; and he was one of the four pianists to commission Carter’s Night Fantasies (1980). He has played and recorded sonatas by Boulez, with whom he has worked closely. His piano playing came to take second place to his intellectual work during the 1990s.

Rosen’s chief contribution to the literature of music is The Classical Style. His discussion, while taking account of recent analytical approaches, is devoted not merely to the analysis of individual works but to the understanding of the style of an entire era. Rosen is relatively unconcerned with the music of lesser composers as he holds ‘to the old-fashioned position that it is in terms of their [Haydn, Mozart and Beethoven’s] achievements that the musical vernacular can best be defined’. Rosen then establishes a context for the music of the Classical masters; he examines the music of each in the genres in which he excelled, in terms of compositional approach and particularly the relationship of form, language and style: this is informed by a good knowledge of contemporary theoretical literature, the styles surrounding that of the Classical era, many penetrating insights into the music itself and a deep understanding of the process of composition, also manifest in his study Sonata Forms (1980). The Classical Style won the National Book Award for Arts and Letters in 1972. His smaller monograph on Schoenberg concentrates on establishing the composer’s place in musical and intellectual history and on his music of the period around World War I. Rosen’s interest in the thought and composition processes of the Romantics, also strong, is shown in his Harvard lectures published as The Romantic Generation. He has written many shorter articles, and contributes on a wide range of topics to the New York Review of Books.

with H. Zerner: Romanticism and Realism: the Mythology of Nineteenth-Century Art (New York, 1984) [rev. articles pubd in The New York Review of Books] 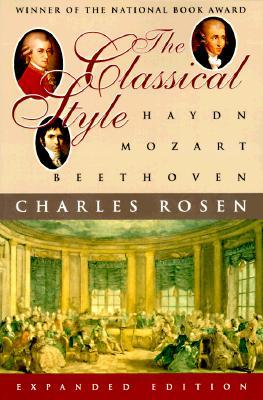