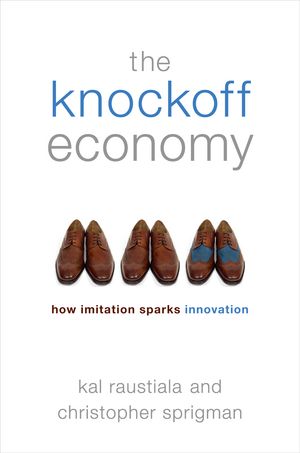 
In the depths of the Great Depression, TIME magazine offered readers a glimpse at New York’s “Dress Wars.” Knockoffs, TIME wrote, were everywhere in the garment industry and “dirty tricks” increasingly ubiquitous:

Among such tricks was the universal and highly developed practice of copying original styles. By the early Depression years it had gone so far that no exclusive model was sure to remain exclusive 24 hours; a dress exhibited in the morning at $60 would be duplicated at $25 before sunset and at lower prices later in the week. Sketching services made a business of it; delivery boys were bribed on their way to retailers.

The American fashion industry’s response to the widespread practice of copying was to create a guild, one that would police copying amongst its members and ensure that retailers who sold knockoffs of guild members’ designs would be shunned and sanctioned. That Depression-era system remained in place for several years. But eventually the US Supreme Court ruled the “Fashion Originators Guild” an illegal cartel.

The Court’s decision destroyed the Guild. In its wake, Maurice Rentner, the former head of the Guild, devoted himself to lobbying Congress to extend copyright protection to fashion designs. Unless Congress acted, he warned, resurgent fashion piracy following the fall of the Guild would “write finis” to the dress industry. In the 1940s Rentner urged Congress to adopt the French system of protecting garment design, lest 500,000 jobs be lost to the better-protected French, and others.

Plus ça change, plus c’est la même chose. At least, that’s true in the world of fashion copying. Just as Maurice Rentner declared that the fashion industry would be killed by the plague of knockoffs, so too do modern-day Rentners foresee a greatly diminished apparel industry — unless Congress acts quickly to stem the tide of knockoffs.

Which brings us to this fall’s Fashion Week in New York. The senior Senator from New York, Charles Schumer, used the occasion to introduce the Innovative Design Protection Act, or IDPA, which for the first time in American history would create an unusual three year form of copyright for apparel designs. In promoting the bill, the Council of Fashion Designers of America, a leading trade group, echoed Rentner’s cri de cœur from 70 years ago:

The fashion industry plays a vital role in the New York economy. The fashion industry employs nearly 200,000 people in New York City alone, generates nearly $10 billion in total wages, and generates tax revenues of $811 million. Over 800 fashion companies are headquartered in New York City, more than double the number in Paris, yet French designers have greater copyright protections…. But these jobs and this revenue for New York are currently in jeopardy because the United States does not provide any protection for fashion designers against having their designs pilfered. If Congress does not act, the US risks losing these jobs to Europe or to Japan, which offer more stringent intellectual property protections to shield the industry from design thieves.

The problem with Senator Schumer’s proposal is the same problem Maurice Rentner faced. Fashion functions very well without intellectual property protection. In fact, the fashion industry not only survives widespread copying; it thrives due to copying. Copying is, in many ways, the engine of the industry. Which is a very important reason that, in the many decades since Maurice Rentner’s apocalyptic predictions, the industry has grown and grown. Even the proponents of the IDPA can’t resist noting that there are twice as many fashion companies in (unprotected) New York than in (protected) Paris.

Fashion — and other fields that similarly exhibit creativity coupled to fashion — poses a quandary for more than Senator Schumer and the CFDA. Fashion challenges some of the central features and principles of our system of intellectual property. The primary goal of intellectual property law is to promote innovation; the primary means is to grant creators a monopoly over their designs, so that competitors cannot copy them and, it is assumed, outcompete them. What the fashion industry shows is that this relationship may be true in some cases, but it is not true in all. Copying does not always kill the incentive to create, nor do copyists always outcompete originators.

How does this work in fashion? There are two key ways.

The first rests on a key feature of the fashion cycle. That styles rise and fall is of course not a new observation. Shakespeare declared in Much Ado About Nothing that “the fashion wears out more apparel than the man.”

What Shakespeare (and Cocteau, Simmel, and many others) noticed was not merely the rise and fall of apparel designs. Instead, they highlighted the fact that the rise actually led to the fall. The fall was not merely inevitable, in the sense of a ball thrown into the air that gradually succumbs to gravity. They drew a causal connection: as fashion spreads, its distinctiveness is destroyed. That in turns destroys much of its value, because the essence of fashion is that it supplies status through distinctiveness.

Of course, not everyone seeks distinctiveness in fashion. Just look at America’s political class: for the men, an orange or purple tie is a mark of outright zaniness, and the women largely hew to pantsuits and jackets that look more like armor than fashion. But for the class of fashion early adopters, things are different. These early adopters seek to stand out, whereas the next tier of buyers seeks to “flock” to the trend. As the flockers flock, the early adopters flee.

The fashion cycle, in turn, interacts in a critical way with the legal freedom to copy. Legal rules that permit copying accelerate the diffusion of styles. That diffusion, in turns, leads to more rapid decline. And more rapid decline creates a faster, more intense appetite for new designs, which, when copied, spark the creation of new trends — and, as a consequence, new sales.

Copying, in short, is the fuel that drives the fashion cycle faster. It is essential to both the trend-making and trend-destruction processes.

The freedom to copy does something else important. It facilitates variations on the theme — what lawyers refer to as “derivative works.” These are garments that use the original design, but tweak it in some new way. Under standard copyright law, the originator has the exclusive right to make or authorize derivative works.

The legal rule for fashion is the opposite, and the many variations on a theme this makes possible means that the stores will be full of countless versions of a popular design. And that makes it easier for fashion-conscious consumers to figure out how to dress fashionably.

The key point remains the same: existing rules, by permitting this kind of copying, act as a kind of turbocharger to the fashion cycle. And that spurs designers to create anew so as to ride the next wave of trends. Far from destroying the fashion industry, the freedom to copy is a central force for innovation and growth. This has been true since the “Dress Wars” of the 1930s, and is still true today.