The Quarterly Journal of Economics

By Nico Voigtländer and Hans-Joachim Voth

When the Black Death struck in Europe, it killed between 30 and 70 percent of the population. What could account for such a catastrophe? Quickly, communities started to blame Jews for the plague. Pogroms occurred all over Switzerland, Northern France, the Low Countries, and Germany. Typically, the authorities in a location would be alerted to the “danger” by a letter sent from another town (Foa 2000). In typical cases, the city council then ordered the burning of the entire Jewish community.

In 320 towns that had Jewish settlements during the 14th century, nearly three quarter (73%) saw pogroms; 88 did not. Many of these locations — with many annihilating their Jewish communities, and others leaving them untouched — are only a few kilometres apart.

In one case, we know more about what tipped the balance: Strasbourg. The city council originally refused to give credence to letters received, warning them of the danger of Jews poisoning the wells. A mob led by the tanner’s guild then deposed the ruling council. Its successor’s first act in office was to order the burning of Strasbourg’s Jews, over 2,000, on St. Valentine’s Day 1349. Here, it is clear what made the crucial difference — the willingness of a violent mob to effectively overthrow the established authorities in order to attack the Jewish minority (Cohn 2007).


We compare local events in 1349 with anti-Semitism in the 1920s and 1930s because two shocks had similar effects. The plague lowered the threshold for violence against Jews; Germany’s defeat in World War I played a similar role. Blamed on revolutionaries and pacifists (many of them Jewish), political anti-Semitism revived with a vengeance after 1918. During the 1920s, several parties adopted anti-Semitic platforms; student associations voted to ban Jewish members; cemeteries were attacked; entire Spa towns declared themselves off limits to Jews. 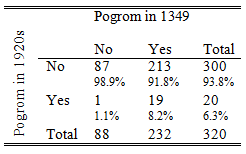 Remarkably, we find that a whole host of indicators of anti-Semitism in the 1920s and 1930s is closely correlated with events in 1349 — almost 600 years earlier. Our first measure is pogroms during the 1920s. We collect data from an encyclopedia on Jewish life in Germany (Alicke 2008), and use it as one indicator for the strength of anti-Semitic sentiment (Voigtländer and Voth 2011). The table on the left shows how their frequency stacks up, depending on whether a locality had witnessed attacks in the 14th century.

Other indicators confirm this conclusion. We use the Nazi Party’s performance at the polls in 1928 as an alternative indicator. This is the last election before it became a mass-movement attracting many protest voters; anti-Semitism was a relatively more important factor behind its appeal than in later years (Heilbronner 2004). The figure below shows the distribution of NSDAP vote shares in 1928. There is substantial variation even in close geographic proximity; counties with high vote share often have neighbors with low Nazi votes. We exploit this variation in our econometric analysis. While the overall share of the vote was not high (3.3%), we find that in places with a history of Jew-burning, the Nazi Party received 1.5 times as many votes as in places without it.

Letters to Der Stürmer, a famously anti-Semitic Nazi paper, tell a similar story. Many of these urge more drastic action against Jews, denounce neighbors still having contact with Jews, etc. We hand-collected the location of each writer of a letter to the editors published in 1935, 1936 and 1937. After adjusting for differences in population size, there is a clear, strong association with 14th century attacks on Jews.

Similar effects exist for the number of Jews deported after 1939, which in our view reflects at least in part the energy of local party officials in finding those in hiding, and the strictness with which racial criteria were applied, appeals for exceptions turned down, etc (figure 3). Finally, we also find that towns and cities where Jews were murdered in 1348-50 saw more attacks on synagogues in 1938, during the so-called Night of Broken Glass. In combination, there is a consistent pattern of association across all five indicators of anti-Semitism between attitudes and actions in the 1920s and 1930s on the one hand, and medieval pogroms on the other.


Why did Germans hate Jews so violently in some places — but not in others — over such a long period? The question is puzzling. Jews largely disappeared from Germany after the 15th century, and only returned in large numbers in the 19th century.

To explain our finding of extremely long-term persistence, we emphasize three factors. First, Jew-hatred may have formed part of a broader pattern of beliefs about the role of outsiders vs. insiders. Where local populations generally convinced their children to mistrust foreigners, blame mishaps on outsiders, etc., the inclination to blame the Jews in times of misfortune, once they were present again, may have persisted for a long time. Second, the typical locality in our study is quite small. The median town had around 18,000 inhabitants in the 1920s. Where few migrants arrived, local culture can be extremely “sticky”. Third, Christians had to have some view on Jews, whether physically present or not. Jew-hatred was often an integral element in local cultural practices. One Bavarian town, Deggendorf, for example celebrated the destruction of its Jewish community in 1337 in every single year thereafter, until 1968.

Our findings thus reinforce recent research in economics that documents just how persistent culture is. Raquel Fernandez and Alessandra Fogli (2009) show that the fertility of the children of immigrants to America is still influenced by what is happening in the home countries from which their parents came; Nathan Nunn and Leonard Wantchekon (2009) argue that areas in Africa affected by the slave trade in the 19th century still show lower levels of trust; and Saumitra Jha (2008) found that Indian cities with a history of peaceful coexistence between Muslims and Hindus had lower levels of inter-ethnic violence in the recent past.

Our results transcend the existing literature by asking what factors can undermine persistence. We show that cities with a rich mercantile history — such as member states of the Hanseatic League, an association of trading cities — show no persistence; medieval pogroms have no predictive power for the 1920s and 1930s. Also, where population growth was particularly rapid in the 19th century, the link between the medieval and modern-day attitudes broke down.

The obvious next question is how much of persistent anti-Jewish culture is still around in Germany today. After 1945, the mass exodus of Germans from the East should have weakened cultural transmission; Jew-hatred changed from official policy to taboo. In related work, we investigate the link by examining surveys about racial attitudes in Germany conducted in the 1990s and 2000s, which ask question like “Are Jews responsible for their own persecution?” or “Would you mind if a Jew married into your family?” (Voigtländer and Voth 2012).

Nico Voigtländer is Assistant Professor, UCLA-Anderson, and a Faculty Research Fellow at the National Bureau of Economic Research (NBER). Hans-Joachim Voth is ICREA Research Professor of Economics, UPF and CREI, Barcelona, and a CEPR Research Fellow. They are the authors of “Persecution Perpetuated: The Medieval Origins of Anti-Semitic Violence in Nazi Germany” in the Quarterly Journal of Economics, which is available to read for free for a limited time.

How did the plague impact health regulation?