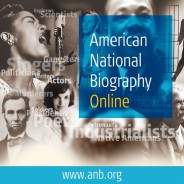 Discover the lives of more than 18,700 men and women - from all eras and walks of life - who have influenced American history and culture in the acclaimed 'American National Biography Online'.

In April 2012, the American National Biography gladly received a new general editor: Susan Ware. Mark Carnes welcomed his successor, saying, “A superb choice! Susan Ware is an outstanding biographer, a proven editor, and a wonderful person. She will thrive in a job whose importance does not preclude it from being great fun.” We’re excited to have Susan leading the ANB and she’s offered a sneak peak of her plans for improving and extending this fantastic resource.

It is hard enough following in the footsteps of Mark Carnes as the general editor of the American National Biography, which also means following John Garraty. Then my husband started referring to me as the next Sir Leslie Stephen, and as a lifelong feminist who has been reading Virginia Woolf since I was a teenager, this was almost too much historical lineage to shoulder. But once I began to settle in to my new job, those insecurities began to melt away as I was reminded what fun it can be to spend one’s professional life in the pursuit of biography.

One reason I am settling in so nicely is that I had great training as the editor of the biographical dictionary, Notable American Women, at Radcliffe from 1997-2005. In fact, Notable has been central to my entire career as a historian. In 1972, I drew on the first volumes for my senior thesis in the then-new field of women’s history at Wellesley College. The next volume which came out in 1980 contained my first published articles as a newly-minted Harvard Ph.D. Then I had the chance of a lifetime to edit the final volume, which appeared in 2004.

Of course the biographical equivalent of sibling rivalry made it difficult to contemplate transferring allegiance from Notable to the ANB, but in the end what drew me to accept the new position was the chance to continue to add and update entries online. This wonderful option allows the scholarship at the core of biographical dictionaries to be current with just the click of a keystroke.

It is to this vision of the ANB as an ongoing, evolving project that I plan to dedicate my energies as general editor. More specifically, my overriding priority is to ensure that the ANB reflects the overall diversity of American history in all its myriad aspects: not just the usual trilogy of race, class, and gender, but also occupational diversity, geographical diversity, and so much more. In line with how American history is taught, my goal is to have the ANB look like and reflect the complexity of American society.

I’ve only been on the job for less than two months, but I can already offer an example of how the ANB will be richer when a commitment to diversity is front and center. It comes from a field which is actually somewhat overrepresented: baseball players. (Why so many? Probably because it is so easy to line up sports-crazy authors for these essays.) How could it be possible to increase the field’s diversity once Negro League pioneers like Satchel Paige, Josh Gibson, Cool Papa Bell, and Oscar Charleston had been included?

Meet Toni Stone (1921-1996), the first woman to play professional baseball. A gifted African-American athlete, Stone played second base on various Negro League teams in the 1950s as a regular member of the line-up, not just as a curiosity on the roster. Because of a fine new biography called Curveball by Martha Ackmann, who in her other life is an Emily Dickinson scholar at Mount Holyoke College, Toni Stone now can take her place as a true pioneer in the history of baseball. Needless to say, I’ve already signed up Martha to do the entry for the ANB.

I’m sure you can see my larger point. Even in a field like baseball, there is a lot more diversity than you might expect. You just need to know where to look and who to ask.

But I can’t do this alone, and I would like to ask for your help. Have you come across interesting figures that you think deserve to be in the ANB? Send us their names. Have you found certain areas of the ANB somewhat weaker than others? Let us know and we will try to beef them up. Are you willing to write entries on specific individuals or a general field? Forward your name and we will see if we can do a little “matchmaking” on our end.

If you eyeball the published volumes of the ANB on a library shelf, or think about the vast quantities of information contained in its online database, you instantly grasp that biographical dictionaries are collaborative undertakings, far beyond what an individual scholar could ever accomplish. As the new general editor of the ANB, I am inviting you to be part of this process. I look forward to your comments and suggestions flooding my inbox.

Susan Ware is the new General Editor of American National Biography. She is an accomplished historian, editor, and the author of seven books, including biographies of Billie Jean King, Amelia Earhart, Molly Dewson, and Mary Margaret McBride. She served as the editor of several documentary collections and of the most recent volume of Notable American Women, published in 2004, which contains biographies of 483 women from over 50 fields. Educated at Wellesley College and Harvard University, Dr. Ware taught at New York University and Harvard. She has long been associated with the Schlesinger Library at the Radcliffe Institute for Advanced Study, and is active in a variety of professional organizations. She has extensive media experience in radio, television, and documentary film and is committed to bringing women’s history and feminist scholarship to a wide popular audience.