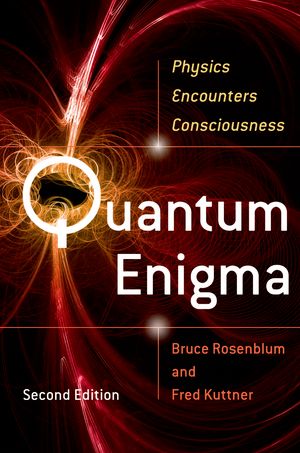 
In trying to understand the atom, physicists built quantum mechanics, the most successful theory in science. And then the trouble started. Experimental quantum facts and the quantum theory explaining them are undisputed. Interpreting what it all means, however, is heatedly controversial.

(1) How important to physics (and science) is quantum mechanics?

Quantum mechanics underlies all of physics, and therefore everything based on physics. That’s, arguably, everything. One-third of our economy depends on devices developed with quantum mechanics.

(2) Physics is about the physical world, not the mental. Right?

Wrong! That was once thought to be true. But quantum mechanics shows the physical and the mental mysteriously connected. That connection is increasingly explored today.

(3) What are Einstein’s “spooky actions”?

Einstein shocked the founders of quantum mechanics by pointing out that quantum theory said that what happened at one place could instantaneously affect what happened far away without any physical force being involved. He called this a “spooky action,” and thought it was impossible. It has now been demonstrated to exist. It is a basis of quantum computers.

(4) Is the quantum mystery controversial?

The New York Times reported a heated across-the-auditorium debate at a physics conference. One participant argued that because of its weirdness, quantum theory had a problem. Another vigorously denied that, accusing the first of “missing the point.” A third broke in saying we must wait and see. A fourth summarized the argument by saying, “The world is not as real as we think.” Three of these physicists have Nobel Prizes, and the fourth is a likely candidate for one.

(5) Can a non-physicist understand the problem?

Yes! Physics encounters the conscious observer in the simplest quantum experiment. The next-to-last sentence in Quantum Enigma is: “Non-experts can therefore come to their own conclusions.”

Bruce Rosenblum is currently Professor of Physics, emeritus, at the University of California at Santa Cruz. He has also consulted extensively for government and industry on technical and policy issues. His research has moved from molecular physics to condensed matter physics, and, after a foray into biophysics, has focused on fundamental issues in quantum mechanics. He is co-author of Quantum Enigma: Physics Encounters Consciousness, Second Edition with Fred Kuttner, a Lecturer in the Department of Physics at the University of California at Santa Cruz.